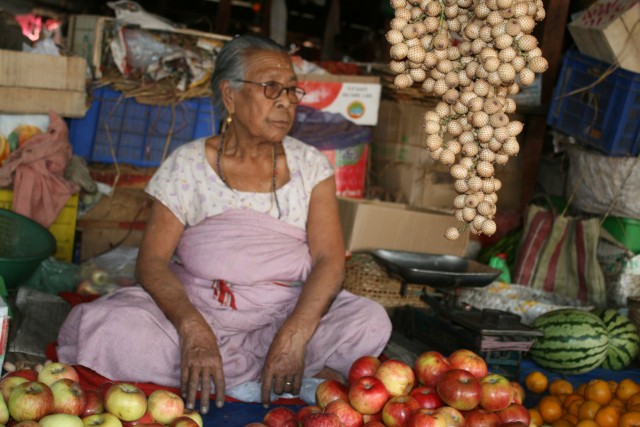 Apart from taking major role in fighting various social issues of the state, Manipuri woman also occupy a major share in the trade and commerce of the state as well as in maintaining economy of their families. Their role in the socio-economic and cultural life of Manipur is significant. They do not stay behind the veil. They come out and struggle to supplement their families’ income by selling vegetable and household wares in the market. Their unique role in the market will be known if one visits Khwairamband market at the heart of Imphal. However, despite their contribution to the needs of the family, their participation in the economy still remains unrecognized and undervalued.

Luikham Shakhi is such a struggling Manipuri woman who contributes her share to supplement the family economy by selling vegetables fruits at ‘Ima Keithel’, a unique market run by only women folk of Manipur symbolizing women’s empowerment.  Through Ima Keithel, women in Manipur have carried the economic responsibility of trade and commerce for centuries, endured political and military upheavals, maintained the indigenous way of life, and remained economic pillars of their families and community. This undying spirit of powerful local women holds them together in solidarity for a better future.

Braving the scorch sun and rain, an 80 years old woman Luikham Shakhi, wife of Luikham Mani of Langjing has been in the business for the last 20 years to keep the kitchen fire burning, provide food for her kids and send them to school. Compelled by poverty, she started peddling goods at Imphal market as a fruit and vegetable vendor at her young age of 25 years.

Varieties of seasonal fruits and vegetables like apple, orange, grapes, pineapple, olive, gooseberies, heiri, cabbage, tomato, brinjal etc are available at the stall of Shakhi. Apples, oranges, grapes are mainly collected from the non local wholesalers while other fruits like heiri, pineapple, gooseberries etc locally available abundantly from the local wholesalers  particularly the woman traders from hill villages.  She sells apples at Rs 140/kg, heiri charong at Rs 600 and orange at Rs 80 and so on.

A mother of five sons, four daughters, Shakhi who can earn Rs 300-500 as profit a day, no doubt fetches Rs 10,000-15,000 a month from her business. “Sometimes,  a woman fruit peddler can earn above Rs 2000 a day during  seasonal festival and religious rituals s like Ningol Chakouba, marriage ceremonies seasons, Durga Puja, Kang and Cheiraoba during which most vendors enjoy best sale and many costumers throng the market”, Shakhi said.

Poverty compelled her to be a vendor

Shakhi said that she got married to Luikham Mani, a mechanic by profession at her young age of 20 years. With the income of her husband failing to maintain the penury driven family, she started following the local woman elders to sell goods at Khwairamand market in a bid to supplement the family income.

Mema Devi, another woman vendor who elks out a living by selling goods at roadside of Khwairamband Keithel said, “It would be a huge relief to many plotless vendors who have been enduring rain and heat throughout the year if the government provides a permanent market shed where we can sell goods comfortably”.

She said that Traffic Police used to drive them away, throw out their goods mercilessly on the street saying that it would impede traffic flow.  Even as the Manipuri women are proud of their contribution in running families by selling goods at road sides, they have been enduring such difficulties.

“Helpless as we are, we have no other option but to endure the inconveniences. Despite all the harsh words and action of traffic police personnel, we are compelled to carry out our business at such foul and filthy places as it is the only source of survival for my family and children.  I don’t care for police throwing away my goods, I have to face everything to save my children from starving”, said Mema who is a mother of five children from Pangei.

In fact, it is a pathetic scene if one deeply witnesses how the roadside woman vendors at Khwairamband Keithel are struggling to sell their goods amidst all odds and difficulties. Traffic police used to wipe them away saying that selling goods on footpath illegal. Nevertheless once they leave the place; all the vendors come back and occupy their usual spot on the footpath. Sometimes, angry police personals throw out their goods on the streets. Under such harsh and pitiable condition, several woman vendors in Manipur have been earning livelihood for their families, children besides herself.