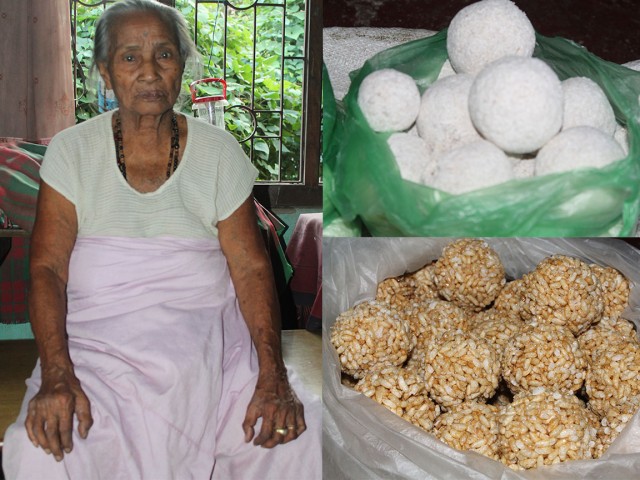 Locally made Kabok (Manipuri cuisine) is a popular Manipuri staple food item prepared with the fried or puffed rice. With imported packed foodstuff from outside gradually dominating the local market, locally made Manipuri foodstuff Kabok is losing its place. Indigenous Manipuri Kabok items like Kabok Khoidum, Sana Kabok, Chini Heingal, Lalu etc which were widely consumed in every household of Manipur as Ngamok could dominate the local market. It was a yummy food Ngamok for children. Mothers used to feed such Ngamok to their children when they returned home from market or somewhere else. Nowadays, people hardly buy these locally made food stuffs with exception to religious rituals and ceremonies like Lai Haraoba, marriage ceremony, shardha ceremony, swasti puja etc
However an elderly lady Yumkham Tamubi, wife of Yaima Rai of Khurai Lairikyengbam Leikai relentlessly endeavors to promote the dying Kabok of varied flavors and taste with indigenous composition.
Kabok making a family legacy
Kabok making is, in fact, a family legacy of Tamubi. The family has been engaged in Kabok making job since the time of Manipur Kings. Embracing the family legacy, the 85 years old lady still continues the profession.
In old days in Manipur society, Kings assigned the task of preparing Meetei Kabok to the people of Khurai Lairikyengbam Leikai only. No other localities were allowed making Kabok. As such, Kabok making job has been a legacy for every household of Lairikyengbam Leikai and the Kabok brand made by the locality is still popular as Lairikyengbam Kabok in the state, Tamubi said.
According to Tamubi, a widow of Lairikyengbam Leikai could comfortably maintain her family with the income from selling Kabok. Many doctors, engineers have been produced with the income from the job.
Support from the family members
Tamubi doesn’t make Kabok alone. She along with her daughters and daughter in laws namely Premlata, Ibeyaima, Indira, Premeshori and Ibemhal prepare Kabok for sale at the market. As such, it has been a major source of income for the family. The different varieties of Kabok are made at her house with her children and then brought to market for sale. With bags of fresh rice procured from the nearby localities, she along with her family members prepares Kabok of different varieties. The rice grain is fried in a Khang (pan) to convert it into Kabok. With that, it is mixed with Chuhi (sugarcane juice). Rounded shaped pieces Kabok are prepared manually with hands, Tamubi elaborated on Kabok making process.

Paddy which is an important raw material for Kabok preparation is collected from the surrounding villages.
“Now, I do not involve in preparation of Kabok at home as I am old and everything has been managed by my family members. The only thing I am doing is to sell the Kabok prepared by my children at Lamlong Bazar. I can earn upto Rs 2000—3000 a day during festivals like Ningol Chakouba, Cheiraoba, Kang etc. In normal days, I can earn Rs 300-500 daily at the average,” she maintained.
Her Kabok brands and marketing
The Kabok brands she makes include Kabok Mori, Kabok Afaba, Kabok Khoidum, Kabok Khoibak, Sana Kabok, Kabok Boon, Phoukhoibum, Kabok Akhingba, Lalu (small, medium and big size), Chini Heingal, Chengpak, Chuhi and many others for sale.
Apart from Kabok varieties, Tamubi also prepares Chengpak (flattened rice) which is made from boiled rice. Chengpak is an essential item mainly used during religious rituals for every Meetei household in Manipur. She also prepares Laloo, another yummy foodstuff prepared from rice flour mixed with sugarcane juice, some made of beaten rice Kabok.
Tamubi initiated the Kabok making since her tender age of 15 years. She has been selling different Kabok varieties at Lamlong Bazar for the last 70 years. Her late husband was working as casual Chowkidar of Social welfare department, Government of Manipur. Tamubi is the mother of three sons and five daughters. She brought up her children with her income from the job.
Manipuri womenfolk, apart from taking major role in fighting various social issues of the state, also occupy a major share in the trade and commerce of the state as well as in maintaining the family. Tamubi is also such a lady who contributed her share in the family economy and to bring up her children.
When asked how many years she plans to go on with the job, she refuses to come up with a number. “As long as I can, and my health permits.” Tamubi is valued by her children, all of whom look up to her as a pillar of strength.
“With all of my four children have grown up and started helping me, I am now able to breathe a sigh of relief up to some extend and those hard toiling days have become past woeful tales, even though memories still exist in my mind,” recalled she said.
Message to people
Kabok, a traditional Manipuri cuisine is losing its place with imported foodstuffs like Uncle Chiefs, Lays, Kur Kure, Rice Noodles replacing almost all the local food brands. It has given a serious impact to women Kabok dealers in Manipur who always take a pivotal role in maintaining families. With fewer customers, women Kabok sellers nowadays hardly get profit from this business. Manipuri Kabok reflects the identity of the State and need to be preserved from extinction, she said
Raw Materials & Equipments for Kabok making
The only raw material required is paddy. Besides, flatten rice, sesame, sugar and salt. Equipments required are oven (large and small), medium size earthen pots, large Khang (a large frying pan), sand, firewood, cane basket, A wire gauge, yangkok (a large rounded cane basket used to extract paddy husk).