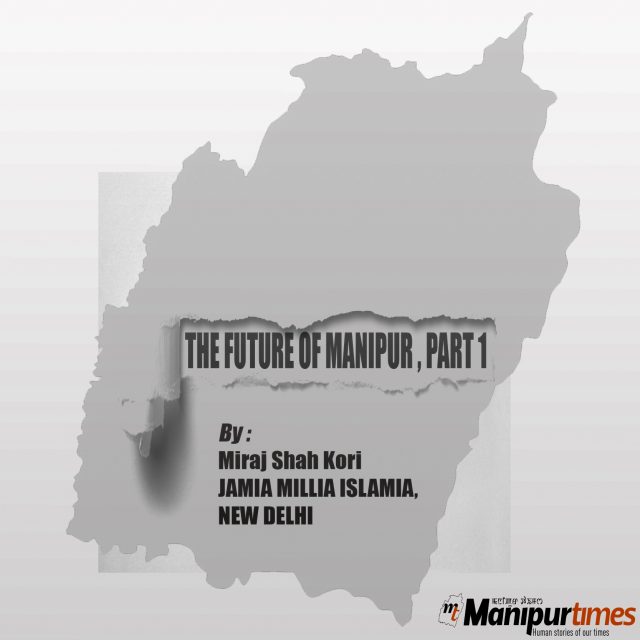 By Miraj Shah Kori
In the light of the rising global inequality within the rich and poor, try to find a future of today’s Manipur which is underfunded, exploited, oppressed   and alienated from the resource and rights as well while the world experiences the unjust distribution of wealth in which 1% of the population has more wealth than the 99% of the remaining population .
India’s richest 1 per cent now holds a huge 58 per cent of the country’s total wealth higher than the global figure of about 50 per cent.The study, released by rights group Oxfam ahead of the World Economic Forum (WEF) annual meeting here attended by rich and powerful from across the world, showed that just 57 billionaires in India now have same wealth (USD 216 billion) as that of the bottom 70 percent population of the country. Comparing this wealth against the estimated budget of Manipur for 2016-17, a proposal for the total expenditure of Rs. 10518.05 crores out of the consolidated fund of the state out of which Rs. 5948.26 cores is under non plan and Rs 4569.78 under plan which include Rs 2768.83 cores under central sponsored schemes and central plan schemes plan fund, can conclude to the negligible percentage which have  been planned for the well being and development of around 3 million population.
Globally, just 8 billionaires have the same amount of wealth as the poorest 50 per cent of the world population. The total Indian wealth in the country stood at USD 3.1 trillion.The total global wealth in the year was USD 255.7 trillion, of which about USD 6.5 trillion was held by billionaires, led by Bill Gates (USD 75 billion), Amancio Ortega (USD 67 billion) and Warren Buffett (USD 60.8 billion).Nobody from this region can participate in this have’s competition except those political leaders whose name has awarded in the incredible WIKILEAKS for their wonderful achievements.
In the report titled ‘An economy for the 99 per cent’, Oxfam said it is time to build a human economy that benefits everyone, not just the privileged few. It said that since 2015, the richest 1 per cent has owned more wealth than the rest of the planet.
“Over the next 20 years, 500 people will hand over USD 2.1 trillion to their heirs — a sum larger than the GDP of India, a country of 1.3 billion people,” Oxfam said.
The huge gap of economic inequalities and unjust form of wealth distribution posed a great threat to the underprivileged and oppressed people of Manipur where 36.8% of the population are under below poverty line.Half of the population of the state are striving to survive with the daily income below 50 Rupees which couldn’t meet the prize of a Burger at MacDonald . Seven lakhs youth of the population are hungry  for the opportunity of employment which they have been  deprived of .
A few hundreds of opportunist are enjoying role of exploiting  the masses accumulating the state  wealth through contract and work project while the population leading to starvation and under development.Actors of the neo-colonialism like the world Bank and IMF spread the venomous propaganda that globalization will reduced inequalities to serve the oppressive western corporate .The foreign corporation are given  their entrance to exploit the resources of the region against the will of the people to serve the  larger interest of the oppressive  state.
What could be the future our oil Wells  which  has signed  to foreign corporate is still being threatened to interest of the masses . The land and forest  are extensively and aggressively occupied through militarization and thus people are driven of their land. The alienation of people from their resources will contribute to the extreme from of inequality .They are deprived of their right to self determination which is embodied in UN Human right charter.Government of India, through its Ministry of Petroleum and Natural Gas, granted license to Jubilant Oil and Gas Private Limited, a company based in Netherlands, for exploration and drilling works in two oil blocks in Manipur. The  richest areas are located in the Jiribam (Imphal East), Tamenglong, and Churachandpur districts of Manipur. The contracts were awarded under the eighth round of New Exploration Licensing Policy (NELP) of the Government of India. The Production Sharing Contract (PSC) for the Manipur oil Block I, codenamed AA-ONN-2009/1, and the Petroleum Exploration License (PEL), was granted by the Manipur Government on 23rd September, 2010.
The total oil potential in Manipur is nearly 5 Trillion Cubic Feet altogether in the Abin, Kharkhublien, Taithu, Sialman, Laimata, Oinamlong anticlines in the two oil blocks of Manipur. After the getting the contract Jubiliant Energy plans to drill from 30 oil wells in Manipur. There is a growing apprehension that ultimately these factors of exploitation of resources and the alienation of the people from the land may contribute  to the extinction of the indigenous Manipuri from this region.Besides this also  violates the communities’ rights over their ancestral land and forest and also Forest (Conservation) Act and Forest Rights Act .Besides these issues of oil exploration, there are the battling issues of displacement or eviction of the residents of different communities through the construction of big dams with no proper rehabilitation and compensation. Mention may be made of the Tipaimukh and Mapithel dam projects. Despite of the huge potential on the part of the human resources and natural resources ,the future of the region is destined by beggar attitude that we are survive by feeding.
to be continue

Of a veteran theatre Activist’s 74 years struggle to promote Theatre and Shumang Leela...