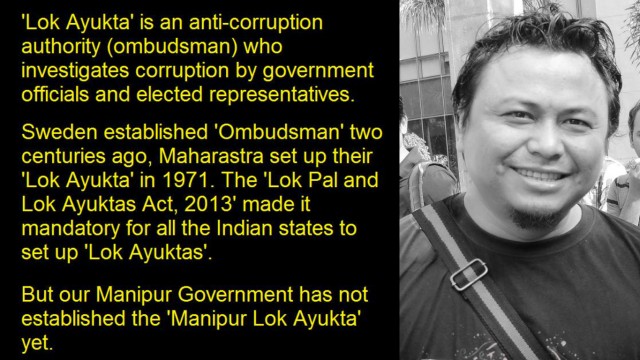 “Corruption is a violation of human rights that leads to ‘systematic economic crimes’, and a ‘serious malady undermining the very health of the polity’ ”.
– Supreme Court

Manipur’s modern culture of corruption is the nexus of contractor-technocrat-bureaucrat-politician who steals public money in standardised percentages. This organised system of robbery loots our money. The public money meant for building infrastructures have turned into marble palaces, sports utility vehicles (SUVs) and expensive apartments owned by government employees and politicians in the metropolises of the country.

The current scenario gives us no guarantee that we won’t lose many other opportunities to corrupt practices in regards to development of our state; whether be it in giving jobs to the deserving, or in implementation of laws and development programs/ schemes that directly or indirectly affects us (unknowingly).
The ‘Let it be’ disease has infected the eyes and minds of us all so much that we have developed a sense of immunity from any of the prevalent economics, cultural and political state of Manipur.

How many times do we remember discussing corruption with our friends over a drink? We come up with all the Utopian solutions and criticise the policy and opinion makers of the state and we forget the topic as we part.

Carrying along this guilt (inaction) with me, I roamed about the city few days ago enquiring the existence of a Lok Ayukta office, which many states of India have. I visited courts, met legal luminaries, and inquired for Lok Ayukta’s office, but I was told that Manipur government has not appointed a Manipur Lok Ayukta yet.

What/ who is Lok Ayukta?
The Lok Ayukta is an anti-corruption authority ombudsman (an ombudsman is an official, appointed by the government or by parliament to represent the interests of the public). It deals with abuse of administrative discretion, misuse of power, mal-administration, inefficiency, administrative corruption, nepotism, discourtesy etc. Any citizen can make his/her complaints of corruption directly to the Lok ayukta against any government official or elected representative. The Lok Ayukta investigates allegations of corruption and mal-administration against public servants and is tasked with speedy redressal of public grievances. The Lok Ayukta is usually a former High Court Chief Justice or former Supreme Court judge and has a fixed tenure.

In India, the ‘Ombudsman’ is called ‘Lok Pal‘ (at Central Level) and ‘Lok Ayukta‘ (at State level).

The concept of a constitutional ombudsman was first proposed in parliament by Law Minister Ashoke Kumar Sen in the early 1960s. The term “Lok Pal” was coined by Dr. L.M. Singhvi in 1963.

The Administrative Reforms Commission of India 1966-70 (headed by Morarji Desai) after studying the ombudsman model in Scandanavian countries (who have had an ombudsman for over 200 years), recommended the setting up of two special authorities designated as Lok Pal and Lok Ayukta for the redressal of citizens’ grievances.

Finally, in 2011 anti-corruption crusader Anna Hazare fought to get the Jan Lok Pal Bill passed, he went on hunger strike, it led to nationwide protests in support and the bill got passed. The Lok Pal and Lok Ayuktas Act 2013 came into force from 16 January 2014. The legislation envisages that the Lok Pal would receive complaints of corruption against the Prime Minister, Ministers, Members of Parliament, officers of the Central government (all levels) and against functionaries of an entity that is wholly or partly financed by the government.

The Bill also made it mandatory for all states to set up Lok Ayuktas within one year of the passage of the bill.

The Manipur Lok Ayukta should consist of a Chairman and two members of whom one should be a Judicial Member. They have to be appointed by the Governor on the recommendations of the Selection Committee. The Selection Committee consists of 1) the Chief Minister, 2) the Speaker, 3) the Leader of Opposition in Legislative Assembly, 4) the Chief Justice of High Court or a Judge of the High Court nominated by him and 5) an eminent Jurist recommended by the Chairman and the Members. 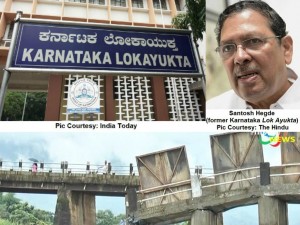 Manipur is Finally Taking Off?