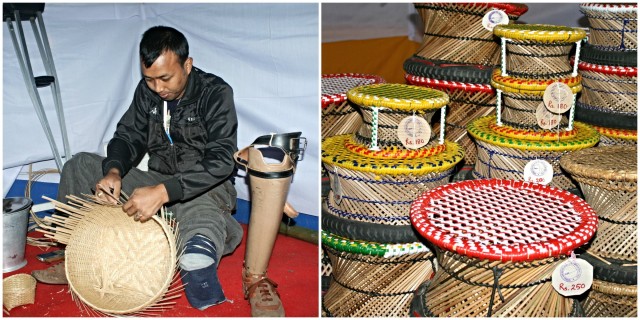 This 21 years old local artisan grew up like a normal person. He enjoyed playing in the local ground with his friends, at the school with his mates. However, destiny made him a disabled person. He lost both legs in a fateful bus accident that took place on February 23, 2012 when he returned home from Kakching Khunou College after appearing his class XII exam. The day still remains embedded in the mind of this artisan. He is now walking with artificial legs. The budding Artisan is none other than Abujam Arunkumar (21) son of Inaocha Meetei and Subita Leima from Pangaltabi Mayai Leikai, Thoubal district who makes various craft items with bamboo and cane. Although physically handicapped, Arunkumar proves that differently abled people too can work and earn for livelihood like the normal people do by displaying their ingenuity. Arunkumar is the third son among five siblings of two sons and three daughters. With the support from his sisters and mother, he makes several items of bamboo and cane craft which is in high demand in the local market. Various craft items made by the artisan using cane and bamboo items including mora, meruk, thumok, lu, tungol, haoruk, lei polang etc are being showcased at the stall opened under the banner ‘Relief Centre for the Welfare of Differently Abled Persons’ at Manipur Sangai Festival 2015. Not withstanding his physical condition, Arunkumar could earn up to Rs 2000 a month with which he supplements his family income. It takes 3/4 days to make one mora. He sells mora @ Rs 350 to Rs 450 per piece. The price of Thumok ranges from Rs 120 to Rs 200. Bamboo variety Uyee is mainly used in making the craft as it is durable, strong and user friendly. He is now living with his two sisters and parents. Both father and mother are now physically weak. As such, he is supporting his family with the income from his craft with the support from his sisters and mother. He points out that there are many differently abled persons in the State who could make fine handicrafts products like any other normal persons.