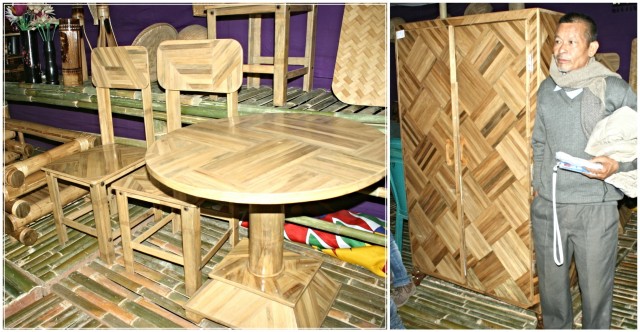 Khwairakpam Ibomcha (62) S/o Dr Kh Bijoykumar, a resident of Sega Road Khwairakpam Leikai who initiated bamboo craft some ten years back, has attracted tourists and revellers with his craftsmanship in the ongoing Manipur Sangai Festival. He makes Almirah, Table, chairs, doors and window etc made of bamboo which are on display at the stall of National Bamboo Mission Manipur, Department of Forest at the Manipur Sangai festival 2015. The stall showcasing finest works of cane and bamboo designed by the local artisans is a point of attraction for the tourists and revelers coming to witness the festival. He works in his work shed all day long. He strongly holds the belief that Bamboo furniture could replace wooden furniture to bring in healthier environment. “Use of bamboo made products will go a long way in controlling the deteriorating global climate change due to mass cutting down of trees for domestic use”, he said. “Fifteen years back I use to read Taiwan catalogue and magazine on Bamboo. One time president of All Manipur Entrepreneurs’ Association, Rishikumar presented me the catalogue which was enriching. I kept on thinking of making bamboo furniture but could not materialize. I mobilised all my efforts and finally ventured to make bamboo furniture and succeeded. Earlier, I was researching on rock cutting to make tiles. Once, I collected sandstone from the foothills of Baruni hills and used a diamond blade cutter to obtain uniform sandstone plates and try to sell it. But that prove disastrous and cost me a lot. I lost all my investments”, he recalled. It took one week for him to complete a set of a round table and three chairs. He is working on his latest design —a chess board with colour pattern originally from the bamboo texture arranged in 64 squares with an 8×8 grid. He is making bamboo hard boards with 2 inch thick bamboo boards joined together surface to surface. Thus a 4 inches thick bamboo board is ready to materialize in a grand and strong furniture. He uses a glue (Fevicol) to join the surfaces together. Earlier, a normal glue took five hours to stick two bamboo pieces together. In 20 degree Celsius temperature it stick in 60 minutes, 40 degree Celsius took half an hour. If fixed in 60 degree Celsius temperature it can be done in 10 minutes. Now I can stick two surfaces in 45 minutes with the new gum of Fevicol Company, says Ibomcha. “During our childhood days bamboo was available in plenty. Now it is not. I use to get bamboo from Singda. Phayeng is a place where one gets all varieties of bamboo. I am using Marubob’ as it is the biggest Bamboo variety found in Manipur. When we make the bamboo pulp into board the thickness at the feet of the bamboo is an inch, in the middle it is half inch thick sometimes quarter inch thick. Saneibi variety costs almost Rs 200 per full length piece. In Phayeng, it is cheap. It is the labour and transportation charges that add up to its cost when it reaches Imphal. I fetch my raw materials after it is being cut into a size”, informed Ibocha when Manipur Times interacted him. “ I have officially trained 20 people under the sponsorship of Commerce and Industries Department, Government of Manipur. They sanctioned Rs 1.90 lakh for the training when Nabakishore was the Principal Secretary of Commerce and Industries Department. Some of the trainees were very enthusiastic and learnt a lot and they have gained skill during the training”, expressed Khwairakpam Ibocha.