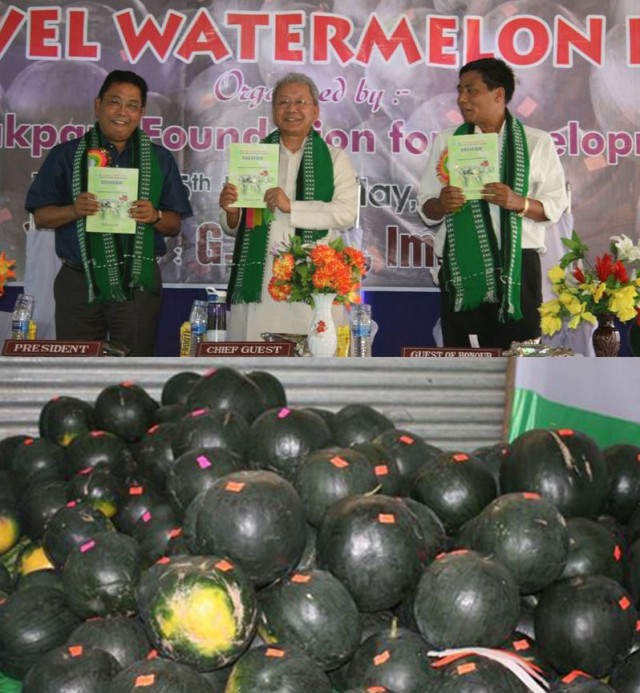 The 4th State level Watermelon Festival kicked off today at the campus of Gandhi Memorial Hall, Imphal here. The festival was organised by The Nahakpam Foundation for Development (NFD) under the initiative of MIDH, Department of Horticulture.

Speaking to the gathering as chief guest, Dy Chief Minister Gaikhangam who is also Minister in charge of Horticulture and soil conservation said that fruits and vegetable products of Manipur has distinctive taste and flavor comparing to that of other states. It is by the dint of unique soil of the state.

Years back, state depended on imported watermelon, even general perception considered it as product of outside. Now the state has abundant watermelon products with many dedicated farmers coming out in the field, he said.

State’s farmers should be proud of their profession and avoid sense of inferiority complex. In other states, farmers are regarded.

The state will develop when all sections of the society cultivate work culture and increase productivity. We depend on other states for essential commodities. This dependency culture should be replaced by work culture, Gaikhangam said.

While lauding the organisers for conducting such festival which not only serve as an encouragement to the farmers but also acknowledging the hard working farmers, Gaikhangam said, “Such initiative can give a boost to the farmer thereby helping the economy of the state”.

Delivering his key note address, NFD secretary, N Santa said that farmers in the state earlier did not realise the value of watermelon with the failure of the concerned department to initiate proper step. The revolution of watermelon began in 2012 when farmers across the state started planting the crop at vast.

Briefing on the objective of the festival, he opined that it was a platform to bridge the gap between farmer and buyers. The festival will not only be a plateform for watermelon lovers, planters and potential planters but also for traders as well. The festival itself will be an integrated watermelon market for seven days where one can not only enjoy but also directly interact with the farmers himself. It is also an opportunity for traders who can come in contact with the farmers for fruits at a reasonable rate.

As part of the festival, Seminars on Agro-entrepreneusrhip, co-operative farming and its opportunities etc will also be held on May 28 and May 29.On May 27, a painting competition of the school going students will be held on the theme Watermelon in our farms. On My 30, a public discussion on the dependence on rain in farming and dependence of rain in Government policy of Agricultural and Horticultural products will be held. A blood donation will be held during the festival.

While lambasting the government for not adopting water policy, he said that green revolution will not be successful in the state since the government fails to take up any measures to encourage the farmers. Government is doing only lip service.