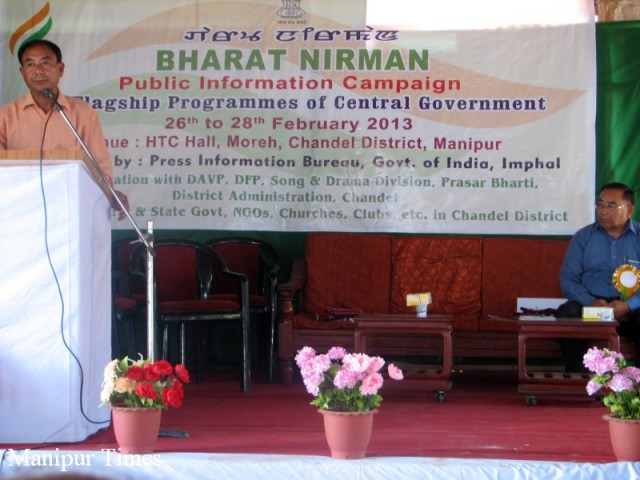 For strengthening the quality of life of the people, Government of India takes up various flagship programs like Mahatama Gandhi National rural Employment Gurantee scheme (MGNREGS), Indira Awaj Yojana  (IAY) a housing scheme for poor people, Rural drinking water, Total Sanitation Campaign, Rural Telephony, Rural Electrification, Rural Connectivity and others. With a view to check out whether the benefits of these welfare schemes are availed with the targeted rural people or not  and  people are fully aware of these schemes and so on, the concept of  Bharat Nirman public Information campaign a media outreach strategy  was developed by the Press Information Bureau, Ministry of Information, Government of India .

With a mission to aware the people inhabiting in the Indo-Myanmar Border  about the flagship programs of the Government, a 3 days Bharat Nirman public Information campaign was held at Moreh, a border town of Manipur located at a distance of about 109 km from Imphal under the sponsorship of Press Information Bureau (PIB),  Imphal. PIB, Imphal organized the campaign in collaboration with the Directorate of Field Publicity, Directorate of Advertising & Visual publicity, Song and Drama Division, All India Radio, Doordarshan, Local Media and NGOs.

The campaign which was held at the hall of Hill Tribal Council, Moreh from 26th February to 28th February 2013 could aware the people of Moreh about the various welfare programs of the Government. Moreh is a small border town inhabited by different ethnic groups like Meetei, Muslim, Kuki, Naga, Tamil, Nepali, Marwari and others.

Technical session having completed, Quiz completion was held for the students participating in the function and prizes were given out to the students.

A team of popular Comedian Artistes of Manipur “ Nokphade “ entertained the gathering  at the end of the campaign. Students from the various schools of Moreh and people living there participated the campaign and made many quarries to the Resouce person regarding the schemes of the Government.

Premlata Loitam, Media and Communication officer, PIB, Imphal, during an exclusive interview with Manipur Times observed that the Press Information Bureau, Ministry of Information and Broadcasting, Government of India has developed the concept of Bharat Nirman Public Information Campaign, a media outreach strategy to disseminate information to the targeted beneficiaries focusing on the flagship programmes of the Govt. of India. This strategy combines information dissemination and demonstration of the benefits at the doorstep of the beneficiaries, particularly in the rural areas. Bharat Nirman Public Information Campaign is designed as a more inclusive tool of information dissemination and envisages direct contact with the ordinary citizens (Aam Aadmi). The campaign seeks to empower the ordinary citizens particularly the rural people with knowledge of the flagship programs so that they can avail the advantages of these programmes to improve the quality of their life. The Multi-Media Event also includes media sensitisation about development programmes, media involvement in the grass root level development projects and motivation and participation of the people in the development process. The campaigns also provide opportunity to collect useful feedback from the people regarding implementation of flagship programmes and other schemes of the Govt. of India.

The following welfare programs are highlighted and aware to the people during the bharat Nirman public campaign. They are:-

“People should not miss such Bharat Nirman public Information Campaign. Rather they should participate it and try to be aware of themselves regarding the benefits of the scheme so that their rights cannot be confiscated by others. If people fully aware of the schemes,no one can misuse the funds of the flagship programs. This is what the Bharat Nirman campaign really means”, said the Media Officer of PIB, Imphal.