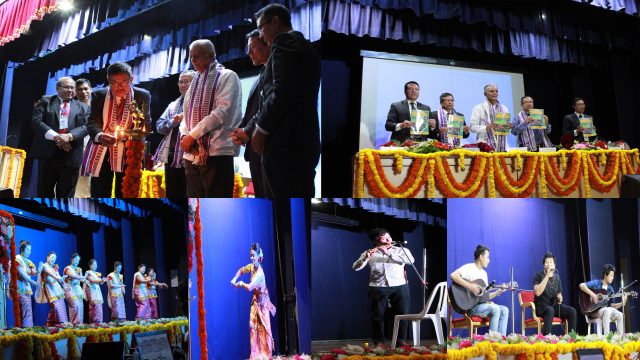 During the AGM, the 2nd AMAND biannual publication “MEMOIR-2016” was released at the hands of the Chief Guest. This was followed by distribution of the first AMAND Motivational Awards to 10 outstanding performers among children/ kins of members of AMAND for their excellence in academics and/or other extra-curricular activities. AMAND Pune has also instituted the “AMAND Distinguished Member Award” this year onwards and the first award was presented to H/Capt N K Singh (Retd), the founder President of AMAND Pune, for his outstanding continuous service to this association.

In the AGM, new executive body was elected and assumed the charge for holding office of AMAND, Pune, for the period 2016-2018. The charge of President, AMAND and General Secretary, AMAND, were handed over to WO. T Pakasana Singh (Retd) and Er. N Giridhar Singh respectively.

The cultural program began with a group dance “Thougal Jagoi” performed by Ladies Club members of AMAND. There were mesmirising performances by various professional artistes like renowned flutist Mr. RK Bikramjit Singh, mouth organ performer Shri Upendra Laxmeshwar, Bihu dance performer Ms. Nayanmoni and budding manipuri singer Rajesh Thangjam as part of the cultural function. About 30 performances by children, ladies and members of AMAND were also showcased during the cultural function. All performances received huge applause from the audience. Around 350 people including members, invitees, well wishers as well as Manipuri families from Mumbai attended the program.

The programme was concluded with a vote of thanks by WO T Pakasana Singh (Retd), the new President of AMAND, Pune. Dinner for all was hosted by AMAND at the end of the programme.