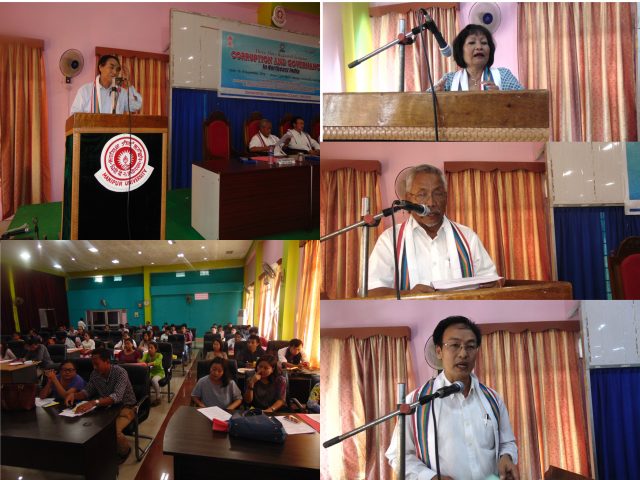 16th September 2016 , Imphal : A Three-Day Regional Seminar on “Corruption and Governance in Northeast India” kicked off on September 16, 2016 at the Court Room, VC Office, Manipur University. The seminar was organized by the Department of Social Work, Indira Gandhi National Tribal University, Regional Campus, Manipur in collaboration with the Centre for Manipur Studies, Manipur University and sponsored by the North Eastern Council, Shillong.

Dr. Aheibam Koireng Singh, Centre for Manipur Studies, Manipur University delivered the Welcome cum Keynote Address. While welcoming the dignitaries and delegates of the seminar, he stated that the purpose of the seminar was to have an academic understanding of the widely prevalent phenomenon of corruption across India. He stressed that corruption has been freely practicing without the fear of prosecution by those occupying the ivory tower and office of the highest authority. He illustrated the phenomena of the Ministers and MLAs becoming contractors whereby the genuine contractors have disappeared in Manipur, the price tag for the post of a SI, ASI, Constable Clerk or Nurse in the Government Department or RIMS and under-table dealings for posting by Government servants, etc. He emphasised that in fact corruption in Manipur has become respectable because so many respectable people are involved in it. The common people have to sell their paddy field or homestead to bribe the ministers for getting a job. The educated youths are terribly frustrated to see the level of corruption in Manipur. This has led to failure of governance as well as for increasing magnitude of scams in the state including siphoning off of allowances and dues amounting to crores of rupees, PDS rice scam, scams over Loktak Lake and Mapithel Dam, etc. and finally the present fiasco over the recruitment of the police constables. He concluded by stating that the academia and activist alike cannot remain silent but have to work together to root out the evil practice so that the deserving can get a chance, then only there shall be meaning in governance and development.

Prof. W. Nabakumar Singh stated that corruption has become a household word in our day-today lives. Every aspect of our life is affected by this practice. There is no supersaturated stage for corruption, it goes on and on. Every solution has the mechanism of dissolving the solutes but not corruption. It corrodes the fabric of the society and nation. He remarked that such a kind of seminar will discuss the varied aspects of corruption in Northeast and work towards finding a solution. He explained corruption in the line of materialistic perspective. According to him, different layers of culture do not go hand in hand in Northeast. In other words, the material foundation of ways of life of the society does not go hand in hand with the cultural ideologies. Consumption behaviour of the people of our society has progressed a lot. Today the status of a person is best exemplified by his consumption pattern. Consumption economy occupies an important role in our society and determines the status of a person. The brand of a commodity a person possesses/wears has become the status of a person. In such a way our ideology has gone far ahead but the change in means of production has not affected the ideology of the people.

To drive the point, he cited the poem “Wonder thrust”, which expressed the wish of the poet to travel around the world with a penny in his pocket. But such a notion today can only be a blind wish, simply impossible in the post-modern nations of the South East Asia (SEA). He observed that people in SEA, in these newly independent states, there exists a gap between means and ends. People are facing inverse culture lack, a crisis arising out of the gap between their cultural moorings and ideology (which is changing very fast) and their means of production (which has remained static). Precisely, this gap between the ends and means is the root cause of corruption in which people resort to using unfair means to get their ends.

According to him, the same phenomenon exists in Manipur. Governance has lost its meaning and we are not able to get the fruits of democracy. The novarich class has become rich fortnight and they are the same who has become interested in politics. They have become the fittest in our society in the Darwinian sense of the word. But this is obviously having a drastic effect on the society and likely to have a negative impact in the future of the society. It carries every potential to tear up the fabric of the society and the nation. However, he inserted that one cannot blame the Government only, people are also equally responsible and to be blamed. The people including the academia has to apply their minds when electing our representatives. It is time to think beyond Darwinism; it is our task to root out corruption.

Shri Khaidem Mani began by defining what corruption is. He said that it is the abuse of public office for personal gains. It is not only about the wrong use of money but also of power. He stressed that corruption violates human rights and it has become an industry in Northeast. He then explained what governance entails and stressed that it includes execution of public policy in an accountable manner and management of resources as per needs of the people transparently. He stated that India is a democracy which is based on the will of the people. But for a corrupt democracy it depends on the will of the rulers. In Manipur there is no democracy but one finds a corrupt state which is marked by “vulture culture” or “a dog eat dog world”. Corruption runs from the grassroot level such as Panchayati Raj and ADC to the State level machinery. He cited the recent-most example of recruitment of police constable. The hill-valley divide that resonates in Manipur today is a result of corruption among the leaders in both the spaces and on account of mis-governance. He concluded by stressing that one cannot remain silent in both the hills and the valley. The culture of silence needs to be abandoned as well as the so called tolerant culture if we have to eradicate corruption. Only then, governance can thrive, unity forged and Manipur truly can become a democratic society.

Ms. Kim Gangte stated that corruption begins from selfishness. He cited the example corruption by Suresh Kamaldi during the Common Wealth Games held in Delhi and how he was arrested. But she reiterated that if Suresh Kamaldi had taken training on corruption in Manipur he would have never been arrested! She shared her experience when she was a politician. In valley areas, during elections, women folk gathers in group to wait for the candidates to turn up so that they can demand money. In hill areas, those who have guns and are power frisk away the ballot boxes. According to her, this is the root cause of corruption, and we cannot solely blame the politicians. Post election, when villagers from far away remote areas come to meet the Minister or MLAs, the politicians is never present in the offices. Or otherwise, on one excuse or the other they refrain from meeting the villagers. So, it is the cycle of neglect, mis-governance and corruption which is destroying the very foundation of Manipur.

Shri Thangso Baite, Chief Guest of the function, remarked that since the objective of the seminar is to get an academic understating of the phenomenon of corruption, it should not be directed against any individual, department or ministry. According to him, Manipuris are not corruption. When only a single person or few are corrupted, it shall be unwise to generalise and infer that all Manipuris are corrupted. There is a due process of law which ultimately punishes the corrupted. He remarked that it would be wrong to jump to conclusion even in the most cited case of the recruitment of the constables. According to him, the Government has already accepted the “errors”: it can be corruption or irregularity or any other form of mistake. But it would be wrong to conclude it as mere case of corruption. Issues, which he believes would be deliberated during seminar are strengthening political institutions, accountability, transparency, governance and most important of all to stop social corruption, for example, the issue of mob justice rampant in both the hills and valley. According to him, the traditional Manipuri culture was marked by peace and cordiality. However, violence has torn apart the social stability. Further, he stated that corruption is an international phenomenon. But the issue is, every Government is working towards controlling it, how to nip at the bud and what kind of law to be legislated, etc. Most important of all, public also needs to be oriented about the evils of corruption. It will be possible to stop the phenomenon only with active participation of the public. He concluded by stating that just as charity begins at home, transformation has to begin from the family. Finally, he appealed to those who engages in bandhs and blockades (he encountered three “stops” at three different points on the way to the venue of the Seminar) to get the attention of the Government to repair roads, etc. to kindly approach the concerned authority. Beginning of social justice begins not only from knowing the about entitled right but also from knowing approach to be adopted without disturbing others.

Dr. Ng Ngalengnam acknowledged that the theme of the seminar is unique as it touches upon right issues affecting the lives of the people in Manipur. He observed that it is the responsibility of the Government to provide security and basic needs to the people. In instances where the Government fails, one can rightly say that the Government is anti-people. It also reveals that it is a corrupt government. According to him, corruption begins from the top (the representatives) and moves down to the lowest level of the society. The Job market in Manipur is afflicted with corruption. Developmental activities are also equally affected. He stressed that everyone is familiar with the story of percentage cuts practiced by the Ministers when it comes to development works. He concluded by emphasising that more pertinent issues will be discussed during the seminar and many of findings can be forwarded to Government for policy formulations to control corruption.