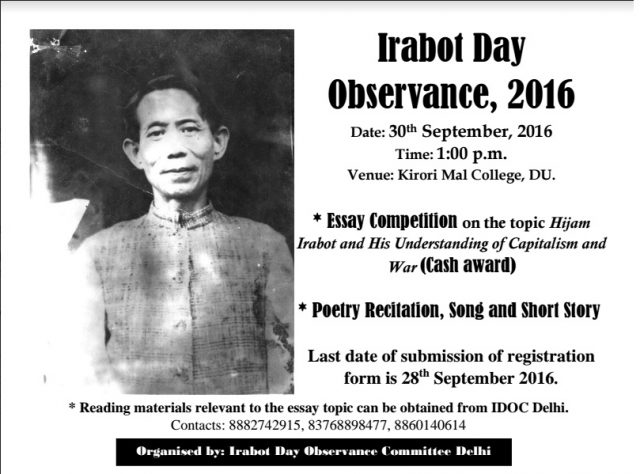 30th September 2016
Time: 1 to 4 p.m.
Kirori Mal College, D.U. New Delhi
Application forms are available to download at the following links
https://goo.gl/Oq0ud1
https://goo.gl/bFCC47
The global economic plunder by imperialism, which is being carried out through the instruments of states that are constituted and maneuvered by locally co-opted powerful sections, poses the biggest threat to economic livelihood, political rights and socio-cultural welfare of underdeveloped masses. The underdeveloped masses, which spread widely across territorial borders, are composed of exploited labours, marginal peasants and a larger chunk of populations in the oppressed nations.
In Northeast India, imperialist plunder is covered up by corrupted formalization of bourgeoisie propaganda of ‘development’ and ‘national security’. The propaganda had hegemonic effect towards making many to blindly subscribe to ‘finance intrusion’ and ‘militarisation’ as necessary for better economy and individual prosperity. In practice, equitable prosperity across individuals and communities remain elusive for the underdeveloped masses: there is merely predominant form of trickle-down effect, that is, manifested in disproportionate distribution of ‘Central funds’ and ‘grants’ thorough corrupt channels, payment of wages, and petty accumulation of wealth by petty traders and other intermediary professionals.
While the economic plunder had to be speed up, the most distressing strategy of misrule to perpetuate plunder is suppression of democratic voices through brutal methods and proxy tactics. On the one hand there is heavy investments in militarization and policing, and, on the other hand there is promotion of communal and counter-democratic forces, which combined to create mistrust and divisions among peoples. As a result, there is rampart violation of democratic rights (including rights to life and rights to economic prosperity) and communal or sectarian conflicts. All these have encapsulated the underdeveloped people under absolute subjective bondage and objective misrule and exploitation.
The Irabot Day Observance Committee Delhi feels that comrade Hijam Irabot (30th September 1896 to 26th September 1951) was one of rare persons, whose understandings of capitalism, imperialist plunder, national liberation and social emancipation are still relevant in our time. He had selflessly contributed to the democratic movement against feudal oppression and for a post independent society that would be freed from subjugation, oppression and exploitation. His international outlook for democratic resistance, and extension of comradeship across territorial boundaries on the basis of common democratic agenda of the oppressed peoples need to be retrospect to overcome the evils of chauvinism and sectarianism prevalent in the contemporary period.
On the occasion of the 120th birth anniversary of comrade Hijam Irabot, the Committee hails him high and offers revolutionary salute. The Committee invites peoples to join in offering tribute to comrade Hijam Irabot and attend the talk programme on the theme Comrade Hijam Irabot and His Understanding of Capitalism and War. The programme will also include poetry recitation, progressive songs and short stories reading related to the theme.
Irabot Day Observance Committee: Email: irabotday@gmail.com

Registration forms (pdf files) could be downloaded from the following links