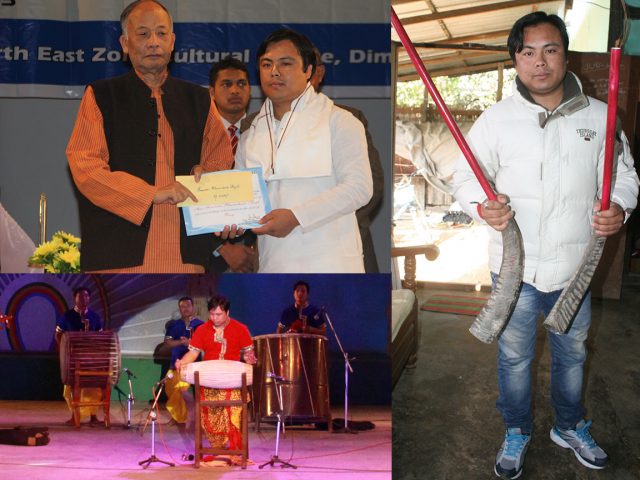 Among the varied art forms, Manipuri Nata Sankritana Pung (percussion) is a globally popular art form. Manipuri Pung cholom, the soul of Manipuri Sankirtana music and Classical Manipuri dance, is world famous. It is a form of Manipuri drum dance where the performer plays the “Pung” or drum while dancing with graceful vigour and acrobatics. Yumnam Bhumeshor is a young Manipuri Pung Artiste who has been adorned with many awards and honours in recognition of his contribution towards reviving the Manipuri pung tradition. He is training around 20 students under his Yumjaomayum Living Art Centre.

His passion for the art

Recalling how he started his career in Manipur pung, Bhumeshor said that initially, he was a football player under DSA Thoubal and he used to practice football at his local playground at Langmeidong with his friends. While doing so, he used to see his local Pung artiste Leishangthem Temba who was always carrying a Meitei pung on his cycle on which tempted young Bhumeshor to make a try of the percussion instrument. Leaving his football practice at the playground, he often beat the Pung which Temba was carrying on his back after performing in sharda or marriage ceremonies.

The news about Bhumeshor beating Temba’s Pung reached to the former’s grandfather who later on asked his grandson to pursue the art of Meetei Pung under Temba if he had the passion for it. Bhumeshor also readily agreed to his grandfather and started learning the art under Guru Temba.

As a music director in film

He has worked as music director in a Manipuri film Tumba Chaba Khangdana directed by Ojitkumar Elangbam. He is planning to showcase uniqueness of Manipur Pung in international arena.  A Nata Sankritana artiste needs to maintain a robust body, skills of hand and knowledge of music tunes.

His effort in popularizing the art

To his credit, Bhumeshor has popularized the Manipuri Nata Sankritana Pung in many parts of the country and abroad. He gave the performance of Manipuri Pung in the 7th Kalanidhi international dance festival in Canada in 2004, as lead drummer in the dance drama Pattano Pradesh produced by Menaka Thakkar dance company in 2004, the Krishna culture festival in Hong Kong in 2008, the India festival Moscow in 2009 and the Festival of Maha Sankritana in Bangaladesh in 2015. Participated India Festival Moscow, a Cultural Exchange Programmed India and Russian Government held on 23rd August to 6th September 2009, organized by ICCR And Russian Government, Festival of Maha Sankirtan as Pungkok Chatpa held on 12th to 13th March 2015 at Bangladesh, organized by Bangladesh Bisnupriya people.

Besides, he bagged National Scholarship in Nata Sankirtan Pung in 2006 by Department of Culture, Govt. of India, Scholarship Award in Manipuri Nata Sankirtan pung in 2014 in the standard of Post Diploma by Jawaharla Nehru Manipur dance academy Imphal.

Bhumeshor is also carrying on a research work “On the relation between Natya Shastra and Nata Sankritana” under the guidance of renowned scholar Guru Sanakhya Ibotombi Haorokcham, Former Theatre Director. Above all, he is also working with Padma shri Darsana Javeri.

His appeal to government