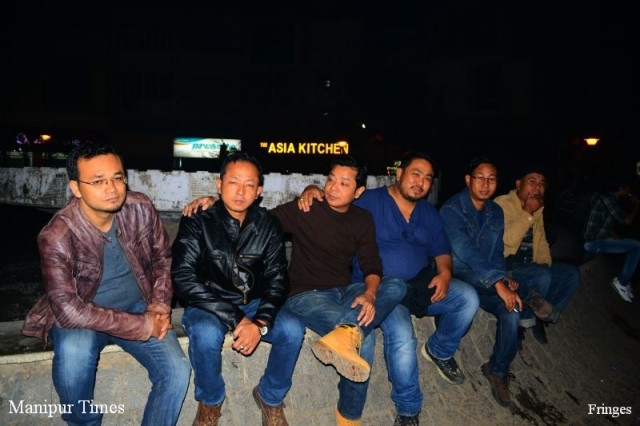 We are organising this event to promote Blues music in Manipur. Down floor I overheard people who spoke that there is a rock show upstairs.

We are exploring new space. We cannot fulfil our audience in big space instead we are targeting the music circle. Small gigs trickledown theory to percolate for wide reach is what we follow. RK James from Oriental Pumpkin Events & Communique had done tremendous work in bringing up our events. His presence has given a professional touch in every musical event we are associated with says Sanjeev Thingnam Lead Guitarists of Fringes.

Our target audience is one who loves blues and anybody who appreciates and accept different genre. We need to understand the crowd and bring up from smaller circle to larger crowd expressed members of Fringes.

Some of the songs in the album are Trapped, Dizzy, Freedom, Cross Fire etc.

“We are trapped in a situation

Where no one can live in peace

No one’s is there to right the wrong

Nobody seems to be around

One man’s down, another man’s up

This is the killing field “read the first few lines of the song title Trapped.

Our band Fringes have socio political expression. Fringes usually meant far off corner. It might be the end of India but on the other hand South East Asian civilisation starts from our region.  Since we are located between South Asia and South East Asia we are narrating stories of the people through the medium of music.

Our recent Delhi tour in 2012 is self-sponsored. We target the pub to tell our stories.

Interaction is very close in Blues show. We get energy from the crowds. It is improvisation and depends a lot on the mood we expressed.

Chumthang Cinema complex, 2nd floor Gambhir Singh Arcade, BT Road Imphal is good as it is sound proof and we can play little louder than acoustic set ups. We are having good time today, our audience are also happy as they can feel us and there is lots of interaction says Sanjeev of Fringes who recently played at Rhythm and Blues Night 23rd feb evening. If we explore such place it is good he continued.

Last year we played at Furtados, Lajpat Nagar New Delhi with a concept to promote musical instrument. The culture is there in Bangalore where people play music at the instrument selling point. We felt like we have introduced the pattern in Delhi.

In Manipur there were no gigs on Blues. We might be the first band performing so we need to start up. Individually there are people who love blues. Sinam Pravin who introduced blues to me will be coming today and it is a wonderful moment for me. I might jam with him today. We need to start up with our juniors too expressed Sanjeev.

As a tribute to the King of Blues, BB King we performed on 16th Sep 2011 at Paradiso marking his birth anniversary. We also played at Chief Secy.  Bungalow on certain occasions like reception of newly recruited IAS Manipur and Tripura cadres. The chief secretary sends us to play at the North East business summit, Le Meridian New Delhi. That was one major gig we played.

Other major gigs include Yaoshang Rock by Nokia during April 2012 where Parikrama band also performed. We have played at Sangai Festival 2012. We do entertain our audience at Rita Café, Classic hotel.

We are improving the response is good as our State is flooded with art lover. Mature crowd is there musical taste is there in Manipur crowd continued Sanjeev.

Manipur has story telling tradition through music, Khongjom Prava, story with Pena musical instrument back up on Call and response mode could be mentioned.

After studying the Pena scale we would love to jam together to bridge the gap of modernity and tradition.