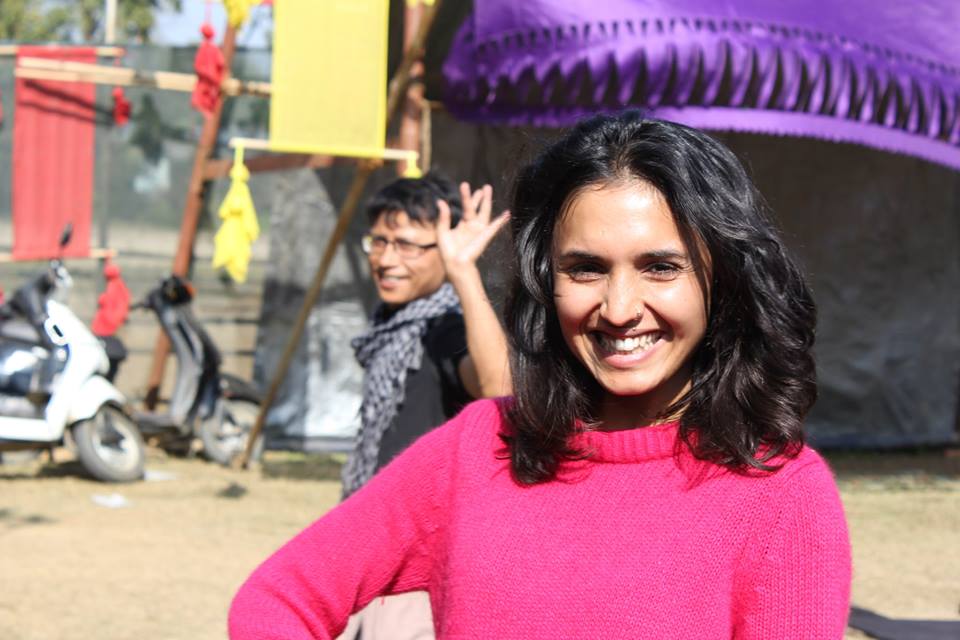 The Butoh workshop in Manipur at SACH was all about learning technique to enter into the door. Learning to feel subtle energy. Hugging a tree to feel the intensity of the heat, texture and smell. Same goes with rock. We were given experiential knowledge not textual. If I want to feel the resonance of the tree we stay with the tree, stand and feel the wind blow. Smell, touches the water, even human to human. Human have sound, smell, heat, intensity. There are innumerable materials you just have to open yourself to listen into that resonance it is a practice to open up”, says Thiyam Chaoba a participant who is a film maker and a meditation practitioner.

Agu Tara – the 27 year old facilitator of Butoh dance was trained in the art form at Subbody Butoh Foundation, Dharamsala, H.P. She has been practicing for the last three years and hosted the 1st International Butoh festival in New Delhi. She came down to Manipur through Surjit Nongmeikakpam, a reknowned contemporary dancer and introduced the Japanese originated dance form in Manipur.

Butoh is said to have originated after the Second World War in Japan. Tatsumi Hijikata and Kazuo Ohno are the known legends. It appeared as a reaction against the contemporary dance scene in Japan, which Hijikata felt was based on imitating the West & restricted to self –expression only. Also, witnessing & resonating strongly with the before- after war conditions in Japan & losing his sister, (who served as a prostitute in the war) is believed to give birth to Butoh.  Kazuo Ohno also fought in the war and lost many of his soldier friends. Both of them are legends; they introduced Butoh to the world.

At first, Butoh came about as revolution of the body. Hijikata researched constantly in the darkness of his body; hidden tendencies, hidden memories of childhood and resonated with weakened bodily conditions like that of leprosy existing around him.  He meditated for long and discovered that his dead sister was living inside him. This gave birth to weakened body butoh. Butoh differs from other movement art forms because it focuses on the weakness of the body rather than the strength.

Over the years, Butoh has been interpreted and practiced differently all across the world.  Butoh is not self-expression. It is Dance of Life. It is ‘Art of Shisha’ ; where ‘Shisha’ are the spirits of the dead in Japanese.

‘Shisha transform their shapes quietly yet infinitely. It is not rare that they borrow the shapes of things on the earth with unexpected nonchalance.’-

Therefore, a butoh dancer takes the form of spirit and opens infinite transformation, can become anything and everything very easily and nonchalantly.

What the Participants felt about the dance form.

Thiyam Chaoba continued to delve into his learning’s on subtle energy, “Everyone walk in a conventional pattern, you eat in the same way, you think in the same way, same pattern in everyday lifestyle at a conscious level where you suppress all the things that you do not want or non-conventional as the society thinks.

“I am this I want this I do not want that and all that you do not want suppresses you. Listening into the resonance is nothing but to come into the subconscious level. If I make an ugly face it is uncanny, when we walk differently with all the muscles that remain unused the unused muscles get into work and our suppression get released that time and we become so free

In the usual manner we have accepted norms where we behave in certain manner. When on the way when somebody asks you as to how you are you often reply that you are fine even if you are not. Here there is no good or bad, if you are not fine you are. We break the pattern. When you are so free and devoid of suppression you are not suppressed. If you have angst in that moment it got released when you speak out your true feelings or woe. Then I can help you with my subtle energy. It is more about taking things out of you. We take away the suppression and unconditioned the condition and you try to become free.”

Loya – I wanted to experience new things, I have not done any dance course, Surjit asked me to join it detailing the not so physical and strenuous work out. It is like soul dance with meditation and moment and since I like the part, I came to join. It is one in a life time experience. It is good thing that such thing is happening in Manipur.

“I used to have lots of inhibition like boundaries, bodies, comfort zone, my body was not touched for long time. After I join this course I was touched by everyone and I touched everyone like trying to find the resonance with the trees and stones.

Qualia the word they use for anything like feeling or sensation of Life. Butoh is more like in tune with the whole of existence, trying to be one with the nature with the trees, stones, sculptures, human and the feelings, touch and sensation. It is a very enriching technique and process in life. During these Butoh days I have become like child nature, easily laughing, joking, fooling and kidding around. I have become a kid all over. It is something amazing. We are gonna’ practice this. It started from Japan.

Dipu – who is 20 years old expressed that the workshop is a new taste which is good. Body massages, exercise, health awareness, self-discovery, connecting with nature are some elements I got from the workshop.

Way of thinking is change from negative to positive; it is socializing out here I make new friends.

Yaisnana – Butoh is like if you have pain in body we breathe and concentrate in the part where I feel pain and get relieve.

Jimsta – “I am in Seventh Standard. I came to know from my sister. I feel happy to get lot of technique. I dance, I do performance show once in a year. It is cool and I do not get angry fast. I will practice at home”.

Agu Tara, has been trained in Subbody Butoh. Subbody is the subconscious body.  Subbody Method was developed by Rhizome Lee, a Japanese Butoh practitioner. Rhizome Lee, opened the subbody butoh school in Himalayas around 10 years back.

Subbody Method is like a movement meditation. Through various conditioning techniques, we go deep into our bodies to experience subtle sensations. Then we express these sensations through movements. Because we work with each individual experience, whatever the movement that manifest is your own.

In the subconscious realm, mind and body are melting into oneness, creating a world completely different from the daily world; Life can explore infinite possibilities of creation that go beyond the human binds of dualism and judgment, self/others, in/out, mental/physical, gender, forms, nationalities and so on.

Sub body Method is a group process. Like an orchestra, we play off of each other’s’ energy and creation. Once you experience this resonance, you will realize that you are resonating being. Your energy is resonating with everything in the universe. And the resonance is the creative force.

Hijikata called it ‘Red God’, or ‘Invisible huge creature that lives in the air’, or just ‘Darkness of the body’.

When we stop dualistic thinking and are able to listen to it, we can give birth a dancing star from it.

It is the infinite soup for dancing star. – Rhizome Lee

Why 3 hour session is necessary?

‘In order to calm down our daily-consciousness and access to Sub body, we need to take it very slow. The first 1hr to 1.5hr of workshop is conditioning, slow gentle movements that guide you to relaxed, meditative states. Then we learn the ways to access to different part of our body and mind to explore.’- Gadu Doushin.