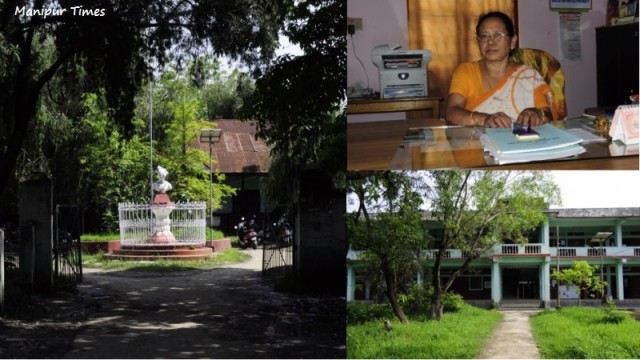 Until few years back, some Government schools used to regularly produce students who could secure positions in top 20 in Class X and XII examinations. Churachand Higher Secondary School was also among such schools which could produce position holders. However, the situation is no more the same. While the performance of the school in higher secondary examination is satisfactory to some extent, performance in Matric exam is not up to the mark.

Although, a number of factors can be cited as the reasons for this downfall of Government schools, lack of co-ordination between teachers and parents is the most important. Majority of the students reading in Government schools do not get proper attention from their parents and guardians as they generally belong to families of lower income group. In Class X and XII examinations where close competitions are witnessed every year, there is need for serious attention from both school and parents.

With most of the students have migrated to private schools, enrolment of students in Government schools is also decreasing every year. Government schools are left in such a situation that they have to teach those children who generally do not get proper attention from parents while the private schools are teaching those children who get full parental support.

Churachand Higher Secondary School is a premier boys’ school in Manipur. The school was earlier known as Manipur Public Institute when it was set up at Kangabam Leikai, Imphal. The dedicated founders and teachers of the institute approached the then King of Manipur, Churachand Singh K.C.S.I, C.B.E seeking some financial assistance to run the institute.

King Churachand agreed with their request and granted royal fund sanction to run the institute without delay. In recognition to the king’s contribution, the name of the institute was changed and renamed as Churachand High School. The school was upgraded to higher secondary level in 1964-65 under C.B.S.E, New Delhi having classes upto XI standard. At present, the school is a full-fledged Government Higher Secondary school having classes from IX to XII standard and affiliated to Board of Secondary Education, Manipur and Council of Higher Secondary Education, Manipur.

The school is located in the North western side of historic Royal palace (Konung), very close to Sanjenthong bridge.

The school aims to impart education so that a student may develop his personality as a complete man; unfold all his inherent good qualities; provide all possible facilities to attain academic excellence and train a generation to become worthy, reliable and resourceful citizens of the country.

ACHIEVEMENTS OF THE SCHOOL

The school opens three streams – Arts, Commerce and Science in higher classes. A Guidance Officer appointed by the school authority looks after the students for their future career.

AWARDS AND SCHOLARSHIPS – Ningsing Marup, a voluntary organisation of 1966 Matric batch of CC High School has started awarding a cash award with citations to the meritorious students of this school in the Matric exam every year.

INCENTIVE AWARDS – Incentive awards are given by the subject teachers to the outstanding students in the school/Board/Council examinations. The facilities of post Matric scholarships sponsored by the central and state governments are also available for the ST/SC/OBC students. Tuition fees concession is granted to economically backward and deserving students.

Downfall of the Government school lies with both the Government and people. The saying, “everybody’s business is nobody’s business” can be applied here. People generally neglect government properties. The common fact that almost all the teachers in government schools, except some teachers, are lack in sense of dedication cannot be denied. Inspectors fail to monitor schools, government fails to take up stringent action against those errant employees who neglect duties. Infrastructure and manpower problems faced by the school are not solved by the government in time.

Parents are also responsible behind the downfall of government schools. Parents do not visit the school where their children are reading to discuss the weakness of the children with the teachers despite they have the right to look after the school. There is a great communication gap between teachers and parents.  So as long as there is no coordination between the teachers and parents, education cannot be improved, observed Indrani.