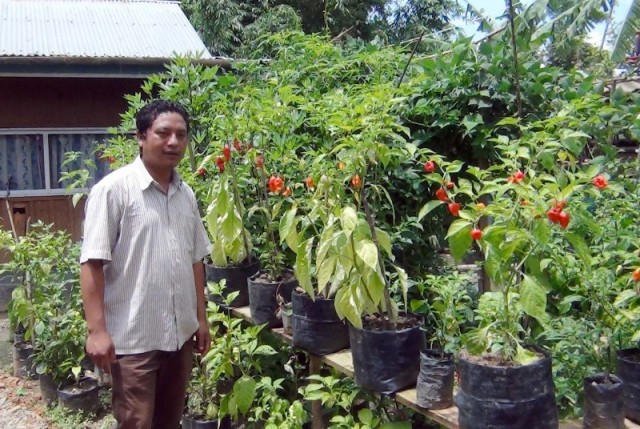 Unemployment is also one of the major problems, which the state is currently facing. According to the records gathered from different Employment Exchanges, Manipur has around seven lakhs educated but unemployed youths. In the meantime, it is also an interesting fact that out of this large number of educated unemployed persons, some of them utilize their resources and knowledge to make a way out for a self-reliant livelihood rather than waiting for government jobs.
One such person is 27-year-old Takhellemba Anand Singh, son of T Yaima Singh of Nongdam village in Imphal East district. He is a young promising progressive farmer, who began U-morok (Manipuri chilly) cultivation in his small piece of land measuring 30×15. In Manipur, one can earn good income if he/she can supply fresh U-morok to market round the year without any break.
FARMING, A VIABLE OPTION
Compelled by financial constraints and inability to maintain his family with his meagre income, Takhellambam Anand began his venture at Nongdam, Punshi Nungshang Hingnakol Lamdai Chingol, where he planted turmeric plants initially with an aim to earn some money. Later on, he added U-morok as another item for his farm considering its high demand and commercial viability. At first, he prepared 500 nurseries of U-morok on trial basis. His endeavour did not go waste but turned out successful. The nurseries of U-morok were sold off at the rate of Rs50 a piece.
Inspired by this initial success, Anand went on his venture of U-morok farming by investing Rs 17,000 in procuring seeds and necessary nursery preparation in the small polythene bags in March, 2014. With all the saplings getting matured and starting giving chilly, he could fetch more than Rs 15,000 by August, 2014 from selling both plants and chilies.
FUTURE PLANS
Revealing his plan, Anand said that under the banner ‘New Age Global Garden’, he is all set to hawk the U-morok saplings from place to place with a mission to make available of U-morok to the people abundantly round the year. The U-morok chilies which come out from his farm are free from chemical and other health hazardous fertilizers. He uses bio-compose, vermin-compose and organic materials in his farm, claimed he.
One of the major hindrances, which he is facing in supplying adequate chilly to the market is unavailability of green house and UV plastic sheets which protect nurseries and chilies from decaying during chilly winter season. U-morok cannot withstand cold winter season. The U-morok nurseries should be planted inside a green house. As he cannot afford it, he has prepared a bamboo made rack to accommodate the saplings. If Horticulture Department provides him some materials like green house or plastic UV sheets, it will help increase production of the particular crop, he assured.
FAMILY SUPPORTS
Supported by family members, Anand is running his farm without any assistance from the government. However, he once got the opportunity to participate the five days farmers training programme at the Indian Institute of Horticultural Research, Bangalore on June 17 this year. 25 farmers along with two officials were sent by the State Horticulture Department from the State for the training programme. The training gave him various inputs of planting cash crops.
He said, “The prolonged endeavor and hardships incurred by me now begins bearing fruit with the demand of U-morok from various costumers both local and outside increasing gradually. One of the agencies from outside the State has asked us to supply U-morok. I am planning to market U-morok outside the State from next year under the brand name, ‘New Age Global Garden.
ANANDA’S EDUCATION
The 27 years old agro entrepreneur hailing from Nongdam village in Imphal East district, located at a distance of just 17 km from Imphal city, is educated only up to class XII. He is married and has a daughter. He could not continue his further studies due to financial constraints of his family. After passing class XII, he also managed to get a white collar job thinking that it would help his poor family. After all his attempts to get a government job went to vain, he started to look out for other alternatives to eke out for livelihood. At last, he started farming which could make a man self reliant sans government help. His success farming venture has been able to provide jobs to his family members and some local men as well.
The state government has been able to provide jobs to only 70 to 80 thousand people out of the total population of 28 lakhs. For a resource backward states like Manipur, it is not viable for government to provide jobs to all. In such a crucial juncture, what the educated but unemployed youths of the state should do is to cultivate work culture rather than waiting for white collar jobs.
Anand said, “Government job is not only the job to sustain life. We should look for other alternatives for earning with utilizing the available knowledge and skills we have. Widespread mix farming would not only boosts up State economy but also provide jobs to large number of people”.