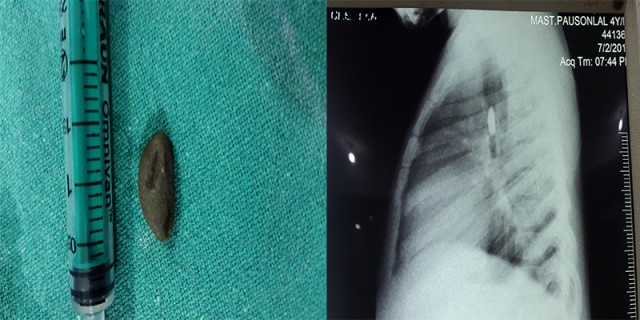 Imphal, 4 th July 2016: Master S. Pausawnlal Vaiphei, a 5 year old boy S/o S. Paulalmuan Vaiphei from Saipum Village, Churachandpur District arrived at Shija Emergency and Trauma Centre today, following a stone being accidentally inhaled into the respiratory tract three days ago. After explaining the critical nature of the problem the child was taken to the operation room. Critical care team including anaesthetists, surgeons and paramedical staff went all out to remove the stone. As the stone with tapering end was impacted in the left bronchus (major branch of trachea) it became impossible to grasp it by conventional instruments. Surgeons then employed a balloon normally used in ERCP to be inflated beyond the stone and pull out to extract the stone. The degree of difficulty is very much raised in such situation as the child could not be continuously anaesthetized since the bronchoscope had to be intermittently inserted into the respiratory tract. After successful extraction the child is now recovering well in the ICU.