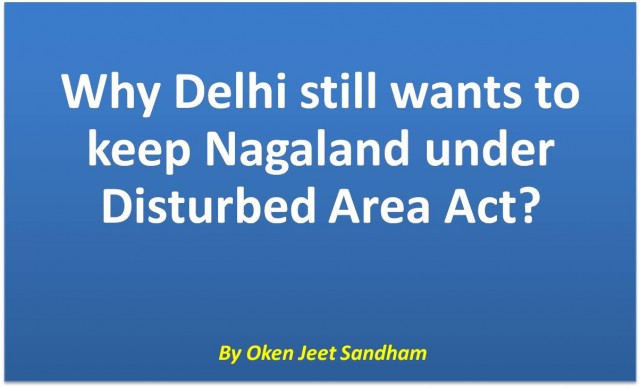 By Oken Jeet Sandham
It is so embarrassing to see the declaration of the entire State of Nagaland as “Disturbed” by the Government of India with effect from June 30, 2016, invoking once again the so-called draconian Act, “Armed Forces Special Powers Act (AFSPA), 1958.”
By what yardstick how the Government of India has once again come to a conclusion to impose this draconian law on the whole of Nagaland State. How the present situation of Nagaland has been likened to 50s, 60s, 70s, 80, and 90s? It is true that even after the historic ceasefire between the Government of India and the NSCN (IM) in 1997, insurgency-related violence continued. But after NSCN (K)’s entering into a truce with the Government of India in 2001, insurgency-related violence in Nagaland had reduced and relative peace started prevailing.
Most of the incidences that had happened after 2001 were mostly factional-related ones which actually continued in the subsequent years. The situation forced the emergence of the Forum for Naga Reconciliation (FNR).
When the factional violence was at its peak, the NSCN (IM) was not deterred from engaging in hectic political parleys with the representatives of the Government of India.
Interestingly, the Indian security forces had never tried to intervene in the Naga underground factional clashes or issues. The Indian security forces rather spent their time mostly in their barracks, and after all, it was ceasefire period. In fact, why the factional violence went up after the ceasefires with the Government of India was largely because of Indian security forces’ going back to their barracks.
FNR headed by renowned priest Rev Wati Aier started playing a crucial role to stop the mindless act of factional violence. They met leaders of various factions of the Naga Political Groups (NPGs) and organised Conferences in foreign soil. They could successfully narrow down the differences among the various NGPs. Finally, historic soccer matches were played between the team drawn up from among the NPGs and the team drawn up from different civil societies. That was simply historic.
So somewhere 2009 onwards, peaceful environment started prevailing in almost all the places in Nagaland. The talks between the Government of India and the NSCN (IM) were still continuing. At the same time, the leaderships of the NSCN (K) also started getting closer to the leaderships of the country.
Unfortunately, after maintaining a ceasefire with the Government of India for 14 long years, the NSCN (K) walked away from the truce in March 2015 and suddenly all hell broke loose. How it happened and why the outfit had to walk away even after maintaining the truce for such a long period with the Government of India. They knew very well that they would face a lot of hardships if they walked away from the truce. But throughout the truce period, they were kept without being given any opportunity to start even minimum informal talks, whereas the NSCN (IM) continued talks with Delhi in full swing. In fact, they (NSCN-K) were made a mockery in the eyes of the world by the insensitivities of Delhi.
Actually, the abrogation of the ceasefire by the NSCN (K) came as a jolt to the peace process. It had come at a time when the peace process was at a crossroads. The civil societies, Nagaland Government, and many stakeholders requested Delhi as well as the leaders of NSCN (K) for the resumption of their ceasefire agreement as it was also the desire of the people of the State.
While doing so, the Center declared the entire State of Nagaland as “disturbed” in June 2015 stating that a “dangerous condition” prevailed in the State and armed forces should assist the civil administration in maintaining law and order. This again gave the sweeping power to the Security forces under the draconian Act — AFSPA. While meeting Prime Minister Narendra Modi in July last year with a Memorandum, the NLF also registered their protest against the declaration of entire State of Nagaland as disturbed under AFSPA saying it would only “vitiate the peaceful atmosphere necessary for a peaceful resolution to the Naga people.” They urged the PM that the AFSPA should be lifted for the sake of confidence building amongst the Naga people and to facilitate an early solution to the Naga political problem.
The AFSPA simply gives carte blanche to the Indian armed forces in areas declared as “Disturbed” in the name of assisting Civil Administration. In all these, they are immune as no prosecution, suit or other legal proceedings shall be instituted, except with the previous sanction of the Central Government, against any person in respect of anything done or purported to be done in exercise of the powers conferred by this Act.
This Act is draconian and simply an anti-democracy. This Act is nothing but a license to kill indiscriminately. This Act also fundamentally conflicts the Fundamental Rights enshrined in the Constitution of India. This Act must go and it should no more be used in this modern and civilised world. But sadly, this Act is still in force in the many Northeastern States of India.
We should also be ashamed of what UN and Amnesty International questioning AFSPA some years back. They had even already asked India to revoke it from the northeastern States of India saying it had no place in Indian democracy, besides it “clearly violates International Law.”
Whether there is peace or violence in Nagaland, Delhi has the same mind and cannot see changes taking place in the State even after their prolonged political negotiations with Naga underground leaders and truces with them. Can Delhi differentiate peace from violence or it still wants to keep Nagaland under Disturbed Area Act.