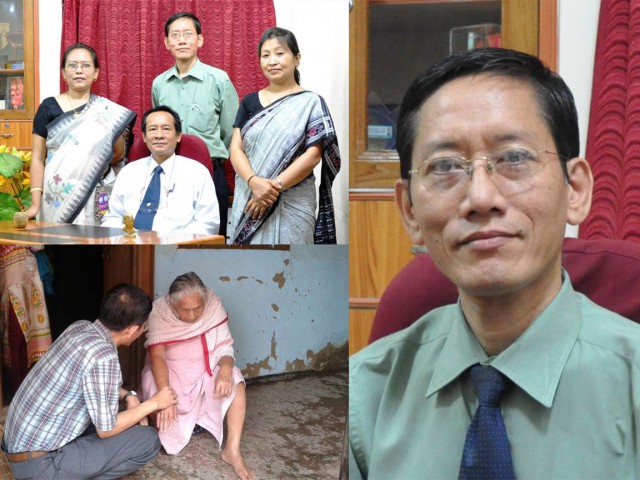 He began his career from a small clinic but Dr Sorokhaibam Jugindra is now a towering figure in the field of surgery. He is a specialist in minimally access surgery who has performed many advanced laparoscopic surgeries some of which being the first in the whole eastern India.

Born to Sorokhaibam Jhanjajit Singh and Nayani Devi on 18th February, 1962, he is the youngest among three siblings. Dr Jugindra has an elder brother and an elder sister. His father was a laboratory technician in the army. So he completed his schooling in different convent schools in cities like Kamptee (Maharashtra), Pune, Kolkata and Roorkee.

After he passed his Class X examination from a convent school in Roorkee in November  of 1977, Dr Jugindra completed his Class XI and XII from Kendriya Vidyalaya School, Roorkee.

As a student, he was excellent not only in academics but also in sports. Dr Jugindra was part of a KVS hockey team which took part at a national level competition. He joined Calicut Medical College, Kerala in 1980. There as well, he was a prominent table tennis player.

After he passed out from Calicut Medical College in 1986, he came to Imphal in 1987 and joined the Surgery Department of Regional Institute of Medical Sciences (formerly known as Regional Medical College) for house job. After working at RIMS for around a year and a half, Dr Jugindra joined Dr Kh Palin’s Shija Clinic at RIMS Road in 1988. Dr Palin is the husband of Dr Jugindra’s elder sister Dr Bonney.

In 1995, he completed MS (General Surgery) from Calicut University, Kerala. He is a trained specialist in Laparoscopic Surgery, Endoscopy and Endourology. Dr Jugindra is also not only a fellow of minimal access surgery but also a national faculty of Association of Minimal Access Surgeons of India.

In 1996, he along with Dr Kh Palin and Dr Bonney performed the first keyhole surgery in their Shija Clinic. Dr Jugindra has performed advanced endourology techniques like PCNL, URS, Cytoscopy, Laparoscopic Ureterolithotomy and TURP for the first time in Manipur. He is also the first doctor in the whole Indian sub-continent who used Harmonic Scalpel extensively for bloodless surgery. Dr Jugindra is also a specialist in Laparoscopic Rectopexy, Laparoscopic Groin hernia repair, Hiatus Hernia Repair, Gastrojejunostomy, Highly Selective Vagotomy, Cystogastrostomy and Thoracoscopy etc.

Dr Jugindra has 20 years experience in General Surgery and Minimal Access Surgery and management of 200-bedded Shija Hospitals and Research Institute. He is the director and officiating medical superintendent of the hospital since 1996.

He has received Dr NB Singh best paper award two times and his papers were adjudged best at IMA Annual Conference on two different occasions. So far, Dr Jugindra has presented more than 30 scientific papers at state, national and international level conferences. He has also participated conferences at various levels including at Singapore in 2000, 2012 and 2014, at Pataya (Thailand) in 2010 and Dubai in 2014.

Dr Jugindra is regularly taking classes at the Nursing School at Shija Hospitals. He is not only a regular speaker and examiner of AMASI skill course and FMAS exams since 2007 but also an operating faculty and trainer at national level in AMASI, demonstrating live surgeries of advanced laparoscopic surgeries at various cities in India. He is also a guide and trainer for post graduate DNB surgery students since 2011.

Dr Jugindra is also associated with many associations like Indian Medical Association, Association of Surgeons of India, Association of Minimal Access Surgeons of India as National Treasurer, Endoscopic and Laparoscopic Surgeons of Asia, Indian Association of Gastrointestinal Endo Surgeons, Urology Society of India, Rotary International, Imphal, Indian Confederation of Healthcare Accreditation, Confederation of Indian Industry and Palliative Care Society, Imphal. He was also a team member in the Guiness Book of records surgery for the successful surgery of the largest tumour in the neck done at Shija Hospitals in 2003.

Dr. Jugindra also volunteered as relief worker in the devastating earthquake of Gujarat in 2001 doing relief work for one week in the immediate post earthquake period. He was also the chief surgeon to perform 32 laparoscopic surgeries free of cost at Monywa in Myanmar in the Mission Myanmar phase 3 program of Shija Hospitals and AMASI in 2013. He presented these works at the First International Conference on Humanitarian Medical Missions held at Singapore in 2014, where he was a member of the task force to formulate protocols on successful voluntary medical missions across the globe. Taking part in the continuous endeavor of Shija Hospitals to develop close bonds with Myanmar he trained two senior surgeons and 6 nursesfrom Myanmar in the skills of laparoscopic surgery and critical care at SHRI,Lango,l for a period of 2 months.

According to Dr Jugindra PCSI intends to bring awareness about palliative care to the people of North East India and to bring the services to the patients. Palliative care, he explains, is total care of patients suffering from chronic incurable disease taking into consideration physical, psychological, social, economical and spiritual condition of the patient and the family members, providing relief from symptoms even though the disease may not be cured. It is about giving human dignity to life towards the end of life which every human being deserves. And as in Kerala the service in Manipur is totally free to the patient and family where palliative care team visits patients at home on a regular basis.

He emphasized the Kerala model of palliative care which is being emulated in many countries across globe and also in Manipur. The success of Kerala model lies in the fact that senior school and college students in Kerala are involved in large numbers as volunteers in palliative care and in fact are the back bone of the program there. The students learn to appreciate life in its true picture, are taught communication skills to arm them with skills of delicate communication with a distraught patient and their family and, above all, students learn the positive attitudes of a good compassionate volunteer and leadership. Dr.Jugindra firmly believes that a similar involvement of students in Manipur will be instrumental in wholesome development of young adults into good human beings who will then be pride of the society. Citing examples Dr Jugindra enumerates many student volunteers in Manipur who are already benefitted by the program.

Around 500 delegates including those from UK, Thailand, Sri Lanka, Kerala, Kolkata, Assam, Nagaland and Manipur took part at 1st Pallicon, Imphal held on 19th and 20th November, 2015, as the first ever palliative care conference of such magnitude in the region. Chief Minister Okram Ibobi Singh and Deputy Chief Minister Gaikhangam also attended the function as chief guest and guest of honour. They lauded the efforts and initiative of Palliative Care Society, Imphal.

Dr Jugindra said, “85 per cent of the total population of the world would need palliative care at one point of time or other. So we need to build a platform from now.”

Dr. Jugindra points out that palliative care necessity of the population can be met only by involvement of people from all walks of life.

In another social activity, Dr Jugindra has also been involving in a new endeavour of developing Langol as a favourite tourist destination. He said, “Langol has a huge potential to become a favourite tourist destination. People of different communities are residing at Langol.” Ever since Tourism Development Society, Langol was established, many activities have been taken up to develop the area as a major tourist attraction.

Dr. Jugindra is married to M. Gayatri and is a proud father of two colleges going children. He has been residing at Langol Lamthungching near Shija Hospitals with his family since the past many years. He may be contacted at drjugindra@shijahospitals.com.