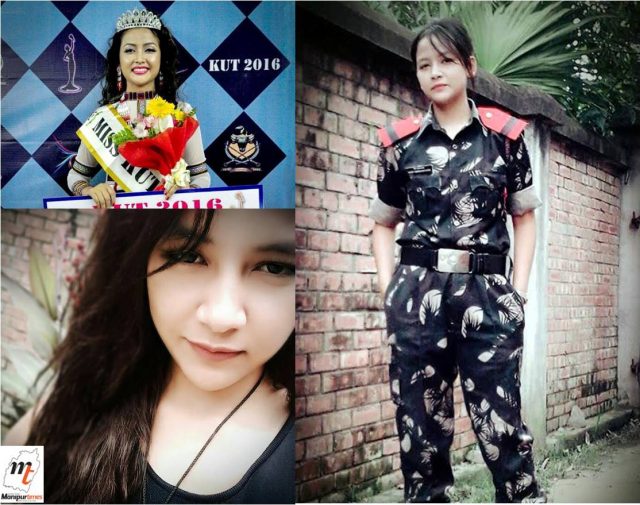 During a candid chat with Manipur Times, Daisy surprisingly discloses that she never dreamt that she would walk on the ramp one day and win a beauty pageant.

Daisy says, “I am not a beauty conscious girl and winning the crown of Miss Kut 2016 happened by chance because of popular stylist and designer Tom Sharma.”

She adds, “It may find funny to many but I am even not comfortable to wear high heels, leave alone walking down the ramp in front of a roaring crowd.”

She says, “I am an NCC Cadet having ‘C’ Certificate (A-Grade) and I have an ambition to become an IPS officer but really did not have any aspiration to become a beauty queen or win any beauty contest.”

Further speaking out her mind, Daisy adds, “Dada Tom Sharma is a family friend and I felt like laughing out loud when he asked me to take part in Miss Kut contest”.

“Beauty and fashion are not my type was my instant response. However, he kept on insisting me till I said – okay, let’s try”, Daisy reveals.

From the day one of training, Tom Sharma motivated Daisy to build up her confidence so that she may conquer hearts of the jury members and crowd with ease. Within ten days, a sparkle was visible in the eyes of the young lady and her mentor was confident that Daisy would certainly rule the roost.

After a 10-day intensive training, she set foot on the giant ramp of Miss Kut 2016 in Vaiphei traditional attire with a positive mind. In the next round, she was clad in a neatly designed gown of Tom Sharma’s creation.

Daisy secured a place among top-10 contestants without much difficulty. In this round, all the contestants were asked to jot down their views on the question, ‘What do you like about Kut festival?’

Daisy answered: “Kut brings unity through culture. Forgetting all the differences, all the ethnic communities participate in celebrating the festival with gusto. The festival showcases the culture of Kuki-Chin-Mizo group. On the other hand, Kut also reveals the underlining values of brotherhood.”

The crowd nodded with a huge applause when the anchors read out Daisy’s answer which gave her a place among top-5 contestants.

And everybody had witnessed that the crowd roared and screamed even more loudly when the anchor named Daisy as the winner of the contest.

Born on February 26, 1995, she began her early schooling at Mt Zion School, Chingmeirong. However, she was later shifted to Nirmalabas High School from Class I and studied there up to Class X.

After she passed Class X in 2011, she chose Arts stream and continued her studies at TG Higher Secondary School. Daisy passed Class XII in 2013 and shifted to DM College of Arts for further studies.

She graduated college with Education Honours in 2016 and she is pursuing her post-graduation in the subject at the same college.

During her college days, she took keen interest in NCC and that is probably the reason why she secured ‘C’ Certificate (A Grade) in 2016.

It is really unlikely to hear from a beauty contest winner, but Daisy reveals to Manipur Times that she won’t take part in other beauty and fashion competitions. Her ambition is to crack the Civil Services examination and render service to the society as an upright police officer.

Daisy makes her stand clear that she is not interested in joining film/television industry as well. She reiterates that she will say ‘sorry’ even if any producer or director requests her to act in a single scene.

When Manipur Times enquires why she is so resolute in her stand, she responds with a sparkling smile, “Coz, I don’t want to waste the money of any producer.”

LOTS OF PRAISE FOR TOM SHARMA

Daisy says that it could not have been possible to win the Miss Kut crown before the guidance and motivation of Tom Sharma. She further says, “Dada Tom was ‘everything’ in achieving the feat though my friends, parents and siblings also gave me lots of support.”

Daisy says Tom Sharma has taught her that there is nothing called ‘impossible’ if anybody is determined to achieve a goal. However, any aspirant, who wishes to win a pageant needs to be confident and must have the right attitude. She further reveals that all the aspirants should also believe in herself/himself.