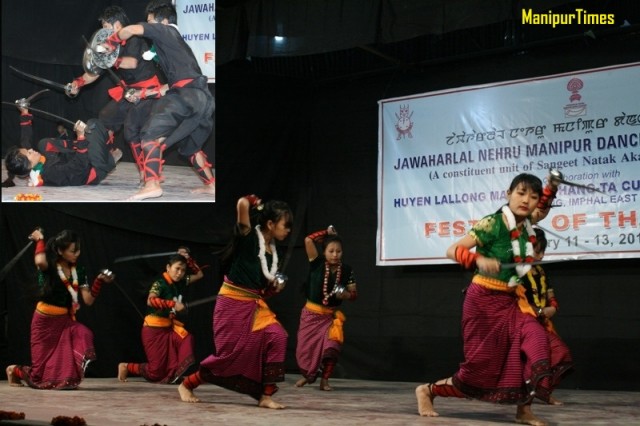 The festival is held as part of the Diamond Jubilee celebration of the Jawaharla Nehru Manipur Dance Academy Imphal.

The indigenous Thang Ta Martial Arts having its unique history is the identity of Manipur. Our brave forefathers safeguarded the sovereignty of Manipur with the help of Thang-ta. Thang means sword and Ta means spear. The rare art form is languishing with the change of time. Protection of our identity lies in the preservation of indigenous culture or art forms, he maintained.

Retired Director JNDMDA L Joychandra said that nobody will understand the culture of Manipur without understanding the aesthetic values of Thang Ta and Manipuri Dance forms. Learning Thang ta requires strict discipline, tolerance and sense of patriotism. The aesthetic Meetei cultural values can be seen in Thang Ta art, he said.

On the concluding day of the festival, a discussion session on Thang-ta would be held with Prof N Tombi as the moderator. Prof P Gunindro, A Ojendro Meitei and Sanathoi Sharma would present papers relating to Manipuri Thang Ta martial arts.