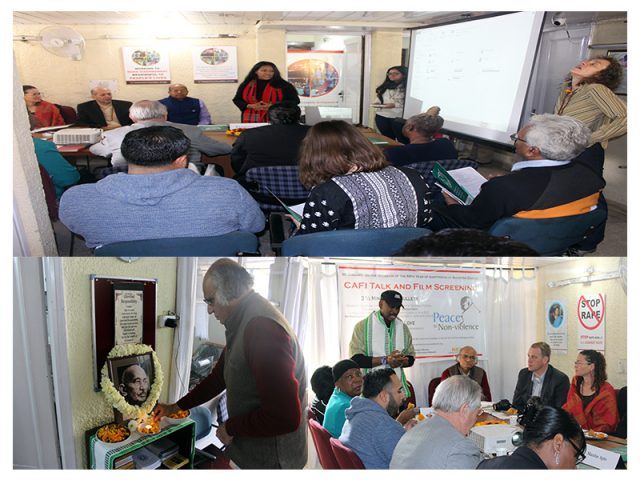 30th January 2017 : Control Arms Foundation of India and Manipur Women Gun Survivors Network on the occasion of the 69th year of martyrdom of Mahatma Gandhi organised a panel discussion and film screening at CAFI conference Hall in New Delhi on 30 January 2017. On 30th January 1948, Mahatma Gandhi was shot dead. Each year this day is commemorated as martyr’s day. CAFI observed the day and rekindled the Gandhian Principles of non-violence and communal harmony by organising a panel discussion followed by screening a documentary film “3 ½ Minutes 10 bullets”.

Ms Binalakshmi Nepram, General Secretary, Control Arms Foundation of India, setting the context of the event and shared CAFI’s long journey from addressing gun violence to now ensuring peace and security for women and all underprivileged in the remote corners of all the 8 states in Northeast of India. She mentioned that 12 Indian die every day and more than 98 countries produced arms weapons and there were over 114 arms manufacturing companies. Hence she called upon to work for a movement against gun violence.

Mr Ron Davis, documentary filmmaker and social activist, USA, said, “It was time to unite people against gun violence”. He further shared the killing of his son in 2012 and the reason why he made the film. It was for the families who were suffering through the grief of racial violence and did not get justice. Hence it was twice as hard for them. While mentioning about firearms death he stated that besides the various rules and restrictions in practice there are 15 states that allow free use of firearms.

Mr Bharat Dogra, veteran journalist and social activist, emphasised on the increasing need of using the method of non violence and said that the basic principal of non violence should be practiced in everyday life be it family, society and countries.

Mr Mandar Apte, award winning social intrapreneur & filmmaker, lamented that “today the world is divided”. And he felt that the event was a great avenue to connect with likeminded people. Ahinsa even though sounds difficult, it is the practice of finding love within and sharing it, he said further.