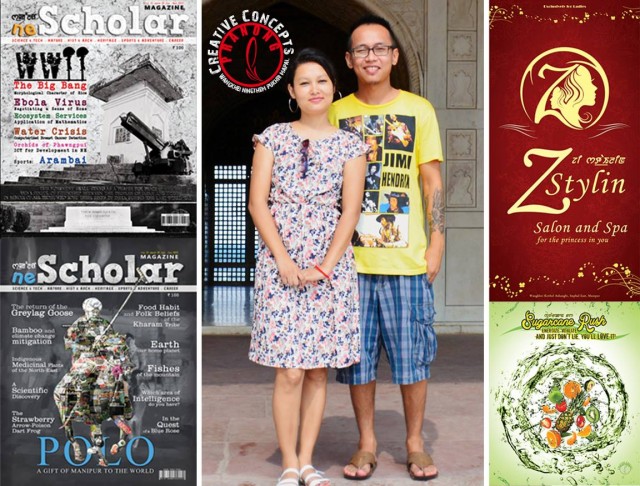 ‘Graphic design’ may be a relatively new term but an undeniable fact is that the concept has been around for centuries. The advent of technology has only sped up its ubiquity but there is a dearth of quality design, and the shortage can be perceived even more acutely when considered in Manipur’s context. Accordingly, a new breed of designers has cropped up to stem the shortfall and revolutionize the way ‘design’ is perceived in Manipur.
Pranong Creative Concepts, a brainchild of and helmed by husband-wife duo Nongamba and Pramika Sorokhaibam, is one of the new crop. Nongamba has been working freelance since 2010 as a graphic designer, motion graphics artist, video editor and visual effects artist in Delhi where he met Pramika, an ex video jockey of the Himali Channel of Darjeeling. After their marriage in June 2013, they set up base in Imphal and have been operating from their residence at Wangkhei since.
Born to Sorokhaibam Gunindra and Sangita of Wangkhei Ningthem Pukhri Mapal in Imphal, Nongamba is the older of two sons. An avid reader with a live imagination, he joined an advanced diploma in 3d animation course with Maya Academy of Advanced Cinematics after completing his graduation in Eng (Hons) from Delhi University.
Pramika, born Pramika Gurung, is the only daughter and the eldest of three siblings. Born to Dilip and Kabita Gurung of Sonada in Darjeeling, Pramika has always had a flair for conversation. After graduation and a certificate course in professional radio jockeying, she has emceed, talked on AIR Kurseong and video jockeyed for Himali Channel before shifting base to Delhi.
The name ‘Pranong’ is an obvious blend of their names and the name ‘Pranong Creative Concepts’ was first coined to christen a Facebook album where they could showcase their works. The name clicked and armed with a computer, a laptop and a camera, they have been busy ever since.
Being a relatively unknown entity in Imphal, it was an arduous task to bag projects and clients in Imphal. Working at nominal charges in order to get noticed, they have been engaged in a variety of small and medium projects.
So far, they have designed a number of logos, brochures, flyers, posters, menus, t-shirts etc. and other related paraphernalia including those of Hotel Tampha, ZStylin Salon and Spa, Emung Interiors and Construction, Sugarcane Rush, Smashed Fly Produstion House, Nanao series of Folktales& Songs to name a few. Besides designing, and out of necessity, they have forayed into photography and they are occasionally engaged in photo shoots but they are more at home when it comes to image processing, restoration and manipulation, based on the needs of the project.
After having established a working relationship with NE Brothers Entertainments Pvt. Ltd while designing the logo and cover of the first book of the Nanao series of folk songs, they were approached to design the second issue of the neScholar Magazine. The whole design including the cover and some of the advertisements was handled by Pranong Creative Concepts and the magazine also featured a lot of their photographs which included the two-page snapshot of the Imphal War Cemetery. The success of the second issue of the magazine prompted the publishers to commission the complete design of the third issue of the quarterly educational magazine to Pranong Creative Concepts and they are currently engaged in designing the promotional posters and banners for the magazine.
Apart from design for print and the web, Pranong Creative Concepts also handles motion graphic ads and videos. Some of their works in this area includes logo sting videos for Akee Sorokhaibam’s Smashed Fly Production House and Shija Hospitals and Research Institute. They have also created motion graphic TV ads for neScholar magazine and Rising Star of Manipur and are currently involved in editing a TV commercial for ZStylin Salon and Spa which was shot and directed by Wanglen Khundongbam. Some of you might have come across the funny tribute video that they created for the popular song ‘Manglan’ by the Imphal Talkies which has generated 9000+ views so far.
It is quite evident now that they are not exactly tied to one particular genre of creative activity and their services are varied. They are now in the process of adding a digital printing service as well so that they can better serve their clients and produce quality print works when it comes to cards, brochures, flyers etc. The printing service would start operating from April 2015.
The following is a list of the services that Pranong Creative Concepts renders but is not limited to

· Video (Motion Graphics, Logo Stings, Typography)
Pranong Creative Concepts believe in quality results and in satisfying the requirements of the clients. They operate keeping in mind the words of Philip Meggs, graphic designer and author, that in graphic design “the essence is to give order to information, form to ideas, expression and feeling to artifacts that document human experience”.
One can follow them at Facebook page : Pranong Creative Concepts