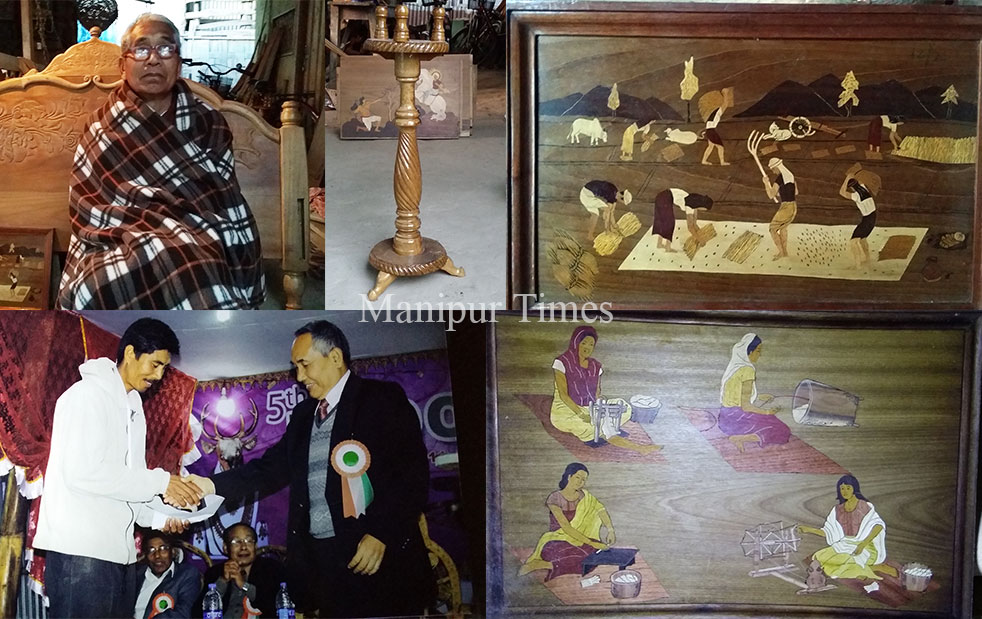 About 75 years back, Ksh. Iboyaima Singh was born to Tomchou and Dhanapati at Kakching Makha Leikai, Rajdhani Pareng. For many years since childhood, he took interest in Pung-esei (Nat Sankritan) as the family was devoted in keeping the art form alive. Iboyaima studied at Kakching Ningthou Leikai LP School up to III or IV Standard, which he could not complete. Oja Jatra was the Head Master then. Nobody, during those times, took serious about studies and he was one among those students who used to keep their school bags hidden in the bush to bunk classes. Talking to the Manipur Times, Iboyaima said that before he got settled with carpentry and wood carving profession, he learnt Pung-esai from Yengkhom Bijoy of Kakching Mayanglambam Pareng. However, the art form that he began learning since 10 years old was not proved lucky for him.

The beginning of furniture work

When he was about 15 years old, he started learning furniture work and his guru was Dhananjoy of Kakching Ningthou Leikai. He was learning as well as working with his guru for about two decades during which he got married with N. Ibeyaima, daughter of Ato and Tunal from Kakching Ningthou Leikai. The couple was blessed with six children – two sons and four daughters. At that time he was 30 years old, and Iboyaima felt that he married quite late.  After two years, he started working alone at his home at Makha Leikai then several youngsters joined him. In 1980 he shifted his working place to Kakching Ningthou Leikai, the present working shed. The furniture work that they learnt at those times were few common things but significant. They made Tam’ng (an instrument to fine thread), T’reng, Masa, Keirak (wooden frame to hold numerous spools), Tem and Eyong etc. These instruments were important as these must be carried by a bride as wedding gift from her parental home. Iboyaima said that the cost of one Phou Sangbai (paddy that could turn to about 30 kg of rice) was Rs. 2.50 when he started furniture work.

The secret gift of Guru

Apart from furniture works, Iboyaima knows wood decoration as well. According to him this work is divided into two types – wood carving and wood elle. Wood carving is an art of making designs and figures in three dimensions while wood elle is the art of carving and fixing woods of different colours to form a unique design or figure. In 1950s Iboyaima got set for wood carving followed by carving the sculptures of human anatomy and idols of God and Goddess. In 1960, he participated in a basic training programme at Kakching Chumnang, near Kakching Higher Secondary School for the first time in his life. The trainers of the basic training programme were from Imphal, who were expert in furniture works, tailoring and physical training etc. Elangbam Amubi and Muhindro were two of the trainers and the latter elaborately taught them about the life span and productivity of a tree, which was needed to be known by a carpenter. They even gave books written by themselves about furniture and wood carving, said Iboyaima and added that he still treasures it. His works progressed fast after the training and the techniques and the knowledge he got from the training programme made him an expert for carving many designs. The door engraved with Ashoka Chakra by Iboyaima in 1950s is still with Satya Singh.

In early 1990s, when Kakching town faced eviction drive, Iboyaima met Birchandra, DIC Officer, Thoubal. A man namely Mangijao from Kakching Moirangthem Leikai introduced him to the officer. The officer was on a tour in and around Thoubal District following an order from DIC, Lamphel in search of handicraft products to show at Mela in Delhi. Iboyaima showed a four-faced Maikhan (Wooden frame screen) to the officer. Although his work was approved by the official team, he could not participate in the fair. So, they took it away to showcase in the fair. Iboyaima’s application for the state award was a turning point in his life. His products could fetch him a sum of Rs. 7500. Then he started sharing a good rapport with Birchandra and his team. In fact they suggested Iboyaima to apply for the award. He registered his firm with the support from Birchandra and applied for the state award. In his first attempt, he was conferred merit award in 1994 and his product was named Thoibi Loi Karakpa. In the next year he received state award in wood carving, thus he tried exploring his creativity up to the national level. Since then, he applied for numerous state awards in which some of his sculptures are named as Manipur Cultivation, Uchan-gi Meira (Keithel Kumbi Ema), Hiyang Hirel and Numit Kap-pa etc. He took nearly three months for each design and he further did not apply for the national awards after 90s. The wooden sculpture of Uchan-gi Meira was presented to Sorojini (wife of Sobhachandra, former Kakching MLA), when she was promoted as Director.

Endlessness of art and artist

As his profession flourished, Iboyaima brought his first son Ramananda to the profession. 45-year-old Ramananda is also a state awardee. He is now a father of two children. He got married to Th. Pratika from Kakching Ningthou Leikai. His daughter is studying MA at NEHU, Shillong and son is studying in Kakching Higher Secondary School in XI Standard.

Talking to the Manipur Times, Ramananda said that wood carving in his life was inspired by those who came to learn from his father. He tried carving when he was in XII standard that is about three decades back, he added. He applied for the state award for three times in 90s and received consolation prize and merit award on first two occasions. At his third attempt he was conferred with the state award for his piece that depicted Lou Ling-ba. Most of the models he carved were drawn by renowned artist Nopur Singh and Premjit. He even tried for national award through his sculptures viz. Nupi-lal and Tareng-naiba, unfortunately he could not succeed. His carvings were sold more or less at Rs. 10,000 each. In his probation, he learnt the art from Kamal Singh hailing from Kakching Turel Wangma with whom he went to Kolkata to attend a workshop organized by Ministry of Textiles. During the workshop, held at Birla Science Museum for one month, he learnt many new techniques and innovative ideas from the other participants. The best carved structure according to Ramananda was that of Thoibi-na sagol faba.  Kamal Singh also taught him a lot and thus his creativity inclined with Godspeed. He knows well the colours of woods which are very necessary in wood elle. For instance milky white wood (Nobap), Yellowish wood (Kelly, kabaw-Oo), Red wood (Khew) and dark wood (wood found in water for long time) are common woods they collect from in and around Kakching and nearby village. All these art works especially for wood elle are impossible without Leihao, which is the background of all the wood carving and wood elle works. Most of his carvings were sold out in Sangai Festival and all that the remaining pieces are only memories and pictures.

Both the father and son give training to nearly ten students under Guru Shiksha programme for six months each year and the same family is running for embroidery training. They are the source of inspiration for the trainees as they tell about their achievements they got and incentives if they are state or national awardees. This aesthetic work needs intense care and patience. So there are not more than three state awardees in the state. The best moment to be proud of is all of them belong to Kakching. The commitment of father and son is to work on the same track till their last breaths.