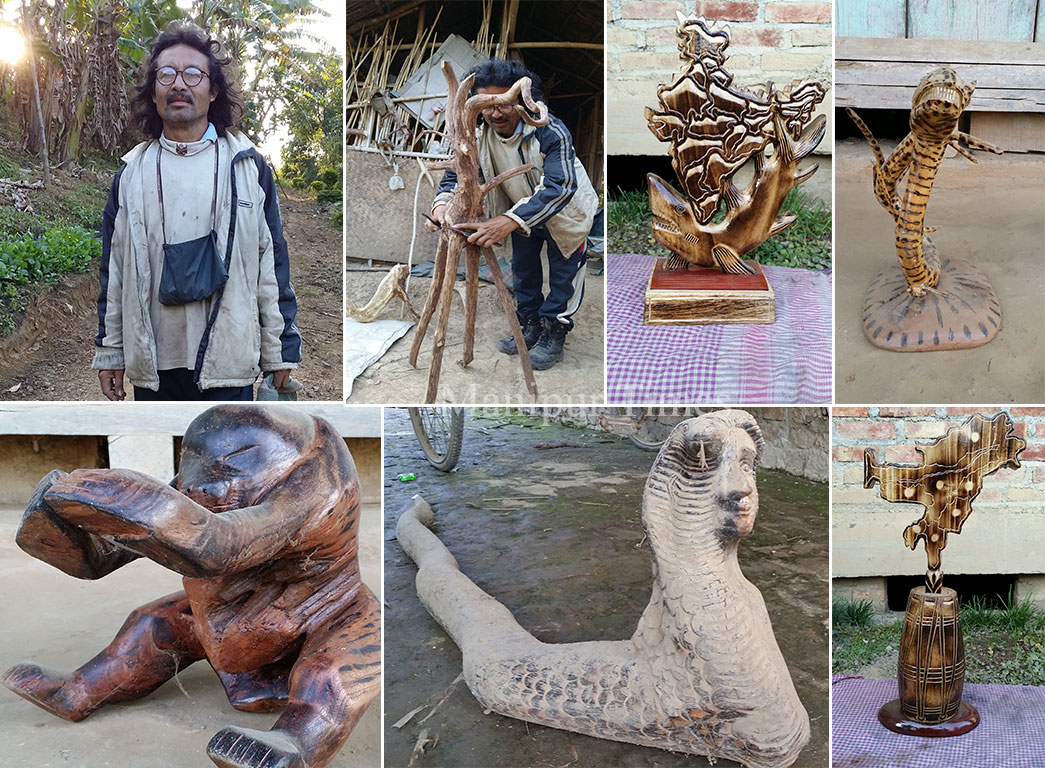 Calm and serene environment generally helps sprout creative minds. And Raju has been interpreting his imaginations to many marvelous creations of wood sculptures at a peaceful place, located around 2km to the west of Kakching town. Kakching denizens know the place as Angaan Konjin, located near Sanamahi Loukon and Community Health Centre, Kakching.

Raju said, “Art is something which becomes more aesthetic when the entire world is silent. Expressions of art through different forms need peace in mind”. Raju is not a sculpturer by profession but he has been chipping at a few sculptures in his free time though he grew up in a family of blacksmiths. Their family has been running the business of assembling bullock card since the days of ‘Japan Lan’ (World War-II).

Contentious of Life and Livelihood

Raju is also farming banana trees and vegetables as a part time occupation. He thinks that farming cannot be a permanent occupation and it just takes 5-6 months to make money out of it. Raju has three children – two boys and a girl. His eldest son, Bhagat has completed his studies in Merchant Navy but not yet started working. His daughter, Babina too has completed her Auxiliary Nursing & Midwifery (ANM) course but studying at KMC, Kakching and youngest son is studying at PR English School.

Raju said that sending children to private schools is hard for the families like his. He feels worry if his children face the same problem of ‘inadequacy’ in their future. He knows that no business is possible without a big capital and he is worried about it as well. Despite such roadblocks many sculpturers are emerging in Kakching as he named a few as Premjit from Ningthou Leikai, Boy, Lukhoi, Joy and few others from Mayai Leikai.

Though there are many sculturers in Kakching, Raju wants people and customers not to compare the items produced by one sculpturer and the other because these sculpturers are ultimately artists and their creation an art.

He said, “Let the buyers choose what they want and let them buy. Art is an expression and the taste of it is different from one person to another”.

At the beginning, Raju did not have any plan to upgrade his small firm to a big business but time has brought the changes and he has to tap according to the beat. Among his items, Aachi and Hiyang Hirel are the most common. Aachi, which is considered to be the first Pa-khang-ba, is the S-shaped structure of Lairen (Python) bearing tail, pair of ears and seven hairy points amidst the horn and it does not have any horn. The seven hairy loops represent the seven directions (Salai Taret) according to Puya (Royal Chronicle), Raju said.

Mentioning about the history of Meitei civilization, Raju said that the Pa-khang-ba could transform into different forms according to the environment and habitat. It existed as a snake in jungles and hills, as a fish in water and as a terrestrial animal on land. The creature has horns and several organs and parts as a man has, representing the complete form of human being. Sculpturing Pa-khang-ba precisely Aachi is the most complicated work they had ever carved.

Facets of an Artist

So far, Raju takes orders only, he tried displaying and selling his sculptures but discontinued due to several reasons. Although working in a small shed, he has made and sold the sculpture of Mukna to an Assam Rifles Major, posted at Aizawl, at Rs4000 and a sculpture of Hiyang Hirel of about 5 feet long could fetch only Rs2000 due to a little defect. In this business, he has made a good link up with Assam Rifles officers, who are posted both inside and outside Manipur and neighbouring states, and they order items for presentations to their friends and near and dear ones.

Recently an army Major posted at Tengnoupal purchased a sculpture at Rs6000. The business Raju deals with is something very unique that the product is hard to sell and demands are hard to meet at right time. Truly speaking it is a risky business in Manipur.

Among his masterpieces, the Pa-khang-ba with its temple is now with Nobo, Meitei, Puya Purohit, hailing from Kakching Laithagol. The complete sculpture is named Mangang Luwang Khuman, defending the three directions. He is now planning to expand his business by making a garden in his farm at Angaan Konjin and a traditional type home cum work shed. He is fond of gardening, as it is another colour of aesthetic life. He wishes if any MLA or rich people donates monetary incentives or any material, say solar-lamp then his business can expand. What Raju is doing is not only about business but for aesthetic pleasure too. It will be great if people appreciate him and his sculptures because peace in mind is the biggest asset.