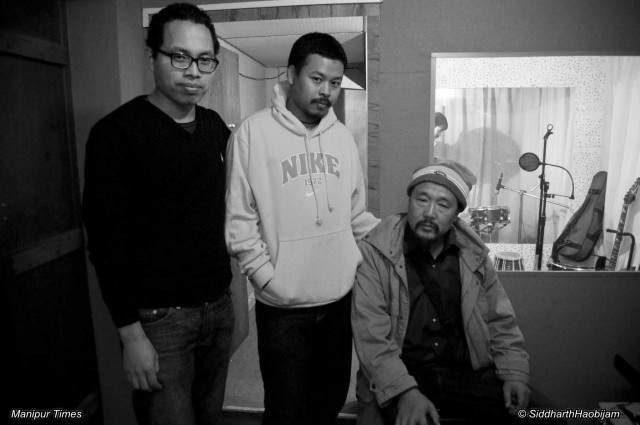 That’s where I play around

These are the opening lines of Akhu’s favourite song, ‘Lullaby’. The song summarises what Akhu and his band, Imphal Talkies are all about. Their songs are usually referred to as protest songs. They protest injustice done on the people by the government. They yearn for those happy moments, which the current generation has never experienced.

Manipur Times had a wonderful opportunity to catch up with two members of the Imphal Talkies during their brief stay at Imphal.

Simple and unassuming to a fault, with no air of the celebrity status the band have attained, they open up on how things have changed from the release of their first album, ‘Tiddim Road’ to the present day, ‘Imphal Music Project’, wherein many renown singers from different parts of the state and country are more than happy to lend their voices.

As Sachin puts it, it has been a long journey; he still remembers the recording of their debut album, ‘Tiddim Road’. They borrowed an old guitar from the studio in which they were recording. They used all their available resources to cut their first album. Even now it’s all about passion, not profit.

But Sachin agrees that things have changed for the better. After The Dewarists happened, they have become more recognisable among the crowds.

So, what is a protest song?

Akhu puts it this way, these songs are not like those sung for love or it is not something like art for art’s sake. According to Akhu, their songs are more like arts for peoples’ sake.

“We believe in bringing out people’s real issues to the front, sensitising people around to the pains, suffering we have to undergo on a daily basis out here in our home state, Manipur. Bandh, blockades, people getting killed all the time; these sure leave a mark on everybody’s psyche and these have to be expressed out in some ways. Some choose to ignore this hopelessness and live in their own world, taking drugs, some choose the violent path, some just become indifferent to the happenings around and pretend that everything is all right around them. But nothing is alright; our songs are our way of expressing our inner ‘protest’ against the situation that is prevailing in the state and country. It is propaganda in the sense that we want to highlight it in our own peaceful democratic ways, how the government has wronged us, hurt our feelings by not accepting us, and treating us as some sort of second class citizens”, Akhu says.

Songs have always been about a message, most have been about romance – love between girl and boy, he says.

There have been instance, Akhu reveals, they were singing ‘India, I see blood in your hands’ in a pub, one man came up to him and told him that he should take himself lucky that people were not beating him up for singing anti-India songs.

But Akhu says, “If they knew what it meant to be made to feel like second class citizens, he could grasp the underlying meaning of the song. It’s not about being anti-India, it is making the rest of the country aware of our existence here in the region, of acknowledging past mistakes and accepting us as normal Indians, nothing more, nothing less.”

The band is definitely against violence. They believe in the democratic process wherein people are made to realise the past mistakes slowly and live together as equals.

“We are against the government because we elect them, we have the right to protest when they don’t act in the people’s interest”, he points out.

Even in Manipur, Sachin adds, Tapta and Uttam have sung some protest songs but unfortunately they seem to not have adopted it as their main approach to singing. Even Tapta’s songs are more like commentaries on the social ills befalling in the state not like protest songs which are mostly political in nature.

“Coming to the ongoing Imphal Music project, we have seen the wonderful contributions, Rahul Ram of Indian Ocean and Guru Rewben made to the first episode. In fact the song “Nonglei” (The Storm) was well received by all people, even we have heard of the lyric been taught in some classes  in a well known local school. So what’s next in the anvil?”, he says.

Sachin was more than forthcoming and informed us that many exciting things are in the pipeline. In fact the band is waiting for Sumit Bhattacharya, the brain behind the nationally well known band, Summit Attempts, to join in the coming month. The next episode of the Imphal Music Project will feature Sumit Bhattacharya with association with Sunil Loitangbam and Shankar Sapam.

And about any future plan with Tapta, the great Manipuri singer who mostly come close to their idea of a protest singer? Maybe, it would be a great idea as Sachin remarks he was their inspirations, in fact they grew up listening to Tapta.