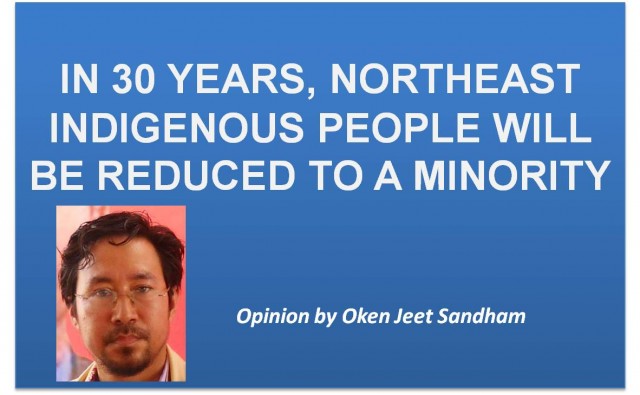 NORTHEAST PEOPLE SHOULD NOT WAIT FOR DELHI TO SAVE THEM. IT IS THEY WHO SHOULD FIGHT FOR THEIR SURVIVAL, OTHERWISE, IN 30 YEARS, NORTHEAST INDIGENOUS PEOPLE WILL BE REDUCED TO A MINORITY

According to official sources, there are 20 million illegal Bangladeshi immigrants are living in India. According to local sources in Assam, the Bangladeshi population in the State (Assam) could be more than 6 million, which is more than combined population of Manipur and Nagaland. Nagaland has a little over 19 lakh population and according to sources, the actual population could be only 13 lakh and even in Manipur, there were over 7 lakh non-locals as per the 2001 census report.

About 12 years ago, then Assam Governor Lt Gen (Retd) Ajay Singh made a startling revelation that about 6000 illegal Bangladeshis were entering into Assam daily. If his statement was correct, then the fate of the northeast people is terribly at stake. Now after 12 years, one can simply imagine what will be the current rate of daily illegal infiltration into Assam from across the International border. Now, it may be anything around 10000 illegal infiltrations into Assam on daily basis.

Region’s economic underdevelopment coupled with Center’s prolonged negligence and the continuous insurgency and the chasm that existed between the people of the region and the mainland people are some of the reasons that have given room to the illegal immigrants and outside elements to exploit them.

There is certainly genuine mainland Muslims in the region but their interest to settle in the region is slim. So their influx is out of question.

The illegal Bangladeshi infiltration into Assam and elsewhere in the region has changed its (region) demography and now it has become a serious threat to the future survival of the region’s indigenous people and also the internal security problem for the nation as well.

Tripura is a gone case and Nagaland is the next target because large number of these illegal immigrants from across the International border has been swarming the State. In the last few years, there is a dramatic change in the socio-economic feature of the State. The locals’ almost lack of work culture, easy money and easy life style, etc. is the main cause that these illegal immigrants mostly coming from Assam have taken opportunities to stay in Nagaland. All the manual works, construction works, taxi driving, rickshaw pulling, cultivation works, mechanical jobs, etc. are mostly done by these immigrants of doubtful identities today. They also run large number of business establishments in Dimapur, the biggest commercial hub of the State and the capital, Kohima.

To identify the illegal Bangladeshis will not be very difficult once the citizens are properly educated. Assam has larger role to solve the illegal immigrant issues and the actions taken there will have maximum impact on other parts of the region.

At the same time, New Delhi also should be held equally responsible of the influx of illegal immigrants from across the International border because of their abject failure to fence the long porous border with Bangladesh. It may take years to complete because of the long stretch of border but if we have the political will; we can even finish construction of border fencing in few years’ time. If we believe that the dreaded illegal immigrant issues can essentially be solved by constructing border fencing, then we must push for it. Today, the country has already celebrated 70 years of her Independence. Are we going to take another 70 years to construct border fencing? By the time, northeast indigenous people will be refugees in their own soil.

Now, new Assam Chief Minister Sarbananda Sonowal, whose party BJP won landslide in the recent Assam elections, said borders with Bangladesh would be sealed in two years’ time to put an end to infiltration. The Muslims in Assam were seen largely supporting BJP in the recent Assam elections and it will be tough for Sonowal to go against the wishes of them. The entire Northeast should come together to fight this influx of illegal immigrants coming from across the international borders as early as possible, otherwise, the whole northeast indigenous population will be reduced to a minority in 30 years’ time. We should not wait for Delhi to fight for this because ultimately, it will be the Northeast indigenous people who are going to suffer beyond repair. There is no option but to come together to fight for their future survival.