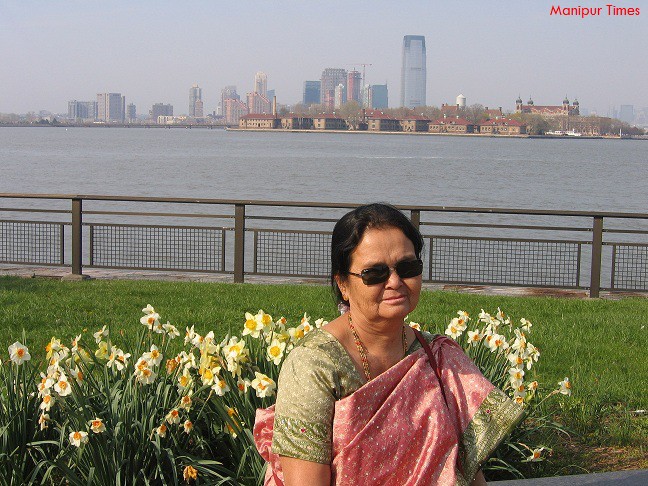 There’s no word as respectful as and more beautiful than the word ‘Oja’ which means teacher. The word is simple yet powerful. It is the oar which rows a society in the right direction for its betterment. Madam Saroj Nalini Ingudam is a retired Sr. Grade Lecturer in Manipuri Language and Literature from Thambal Marik College, Oinam.

We now have students from Manipur studying outside in Delhi, Mumbai, Chennai or any state of India. We hardly find an Indian state where there is no Manipuri. But in early 70s, it was rare. “Only few were studying outside the state” recounted Madam Saroj Nalini.

As a child she used to play the role of a teacher while playing with her friends letting them act as students. She passed out from JNU, Delhi as a student of first batch of MA Manipuri and completed her MA in 1974. Seven years later she started teaching as a lecturer in Thambal Marik College on April 9, 1981. The college was established in the same year when she joined as lecturer.

The unfortunate part of an employee working in a state like Manipur is irregularity in the salary system. During her 20 years of service, she never received a regular monthly salary. She wanted to produce good students but the non-punctuality of students and irregular salary often led her to feel frustrated even though she was very enthusiastic in teaching. However one lucky day, when she went to pick up her kids, she met the then Father of St. Joseph School who told her about a vacant post of Manipuri subject teacher and offered her to take the opportunity if she wished. She was so delighted at the opportunity of exploring her knowledge with enthusiasm. She had been working for 11 years since 1985 as part time teacher and finally she became a fulltime teacher from December, 1996.

As the salary was meagre from the college where she worked, the college authorities agreed for the teachers to come for only 3 days a week as it was costly for everyone to get the bus and come to college. Hence she took the opportunity at St. Joseph School to teach on the remaining working days. Her devotion towards teaching may be a reason why she is renowned more to the students of the private school than those of Thambal Marik College. She has a good relation with the students of HRD Academy too. She taught there for 7 years from 1993 following a request to her from the academy in its early establishment.

During her services, she completed her M.Phil from 1988-89. During her M.Phil, she recounts the interesting assignment she made out of banana leaf which was of 50 marks. As we know that the leaf of a banana tree is used in various states of India, especially in Manipur & other north eastern states and South Indian states for serving foods. The leaf is also used in various activities from customary and traditional point of view in Manipur. The leaf has a unique way of using it for invitation; by cutting it in a round shape, known as ‘Lakoi’. Not only is this, the way betel and betel leaves are put on it is also very significant in inviting the King, the Queen (Leima) and offering prayers to Shri Govindajee. All these was explained after she consulted with the scholars (Meitei pandit) and Schools (Pandit loishang)who revealed the secret knowledge of representing an invitation with banana leaf.

A teacher never contends himself/herself by the salary he/she draws but the success of students in getting good respective services. Madam Saroj was once invited by the Director, DDK Imphal to meet him in his office. Mr. Nandakumar, the Director, bought a beautiful Saree for her from his first salary.

When she was working as a teacher, she would often joke with her students. One day she asked her students, “What will you buy for me, when you get a job and earn?” Nandakumar, her student then, replied that he would buy a beautiful Saree for her. And after all these years, she was invited by her then student. She was showed the equipments & technologies, recording room & broadcasting system etc. by the Director. The short moment was special to her which would remain forever and ever. She met many of her students working in different departments and she felt at home whereever she went, to the police station, law office, administration units and so on. She even met her student while travelling who is now an air hostess. Her happiness reaches no bounds when she sees the unbreakable bond, gestures and deep understanding relationship that she has with her student.

It saddens Madam Saroj Nalini to see the difference in the education system imparted in government, private and mission schools. Also government higher secondary schools never found any authority inspecting the classes, teachers, and staffs regularly. It may be a reason, why the private or mission schools go ahead in every exam or competition when compared with  government schools. The students from Little Flower, St. Joseph, Don Bosco etc. top the board exams while those of government schools remain behind. In this scenario, the head of the institution has a big responsibility to rectify or improve the education system of students and schools to grow on the same platform where the private schools play. If the authorities are slacking, the students and staffs too will be slacking, says Saroj Nalini.

Madam Saroj recounts an embarrassing incident that happened when she was working in St. Joseph School. There was pin drop silence in the class, she was in deep concentration teaching her students and she had failed to notice a student sleeping in the back bench. The Father, Principal of the School came in, tapped on the table and woke the boy up and left the class without a single word to her. The silence of the Father spoke a lot and from that day onwards she was very careful about both the lesson she taught and the behavior of the students. She started walking around in the class while giving her lectures from that day.

She feels there is a difference in the way private schools and government schools function. The way the teacher are assigned, paper corrections are done, unit tests are taken, discipline of the students are maintained, etc plays an important role in maintaining the school’s performance in top positions. The booming private schools in Manipur compete among themselves and it all depends upon the head of the institution, she suggested.

Apart from sharing her teaching experience, she also shared a lot on Ningol Chakouba. Being a Manipuri woman, she briefly explained the knowledge she have about this specific festival of Manipur. Ningol Chakouba is a traditional Manipuri festival which has been performing on 2nd day of Hiyangei (a month of Manipuri Lunar Calendar) since immemorial time. This festival, according to Cheitharol–Kumbaba (the Gregorian Date), had a different meaning from what we see today. The term is slightly deviated too, as the saying goes ‘Ningol na Chakouba’ once. This mean the married woman used to invite her brother and serve him with a very simple feast. But the trend changed during the reign of one of the King of Manipur when he found out about the short-comings of his sister in arranging the feast  who was married to a poor family, The details of turning Ningol na Chakouba into Ningol Chakouba is precisely written in the Royal Chronicle of Manipur, she said. The real image of the festival is about the relationship between brother and sister but not about the gift. She feels it has changed in today’s materialistic world. The relationship between brother and sister is now measured according to the gift he can offer in the eye of our society. Gifts like Colour TV, Refrigerator, Washing Machine or even four-wheeler became the yard stick of a true relation. Also, at times there are competition and comparison on gifts received on Ningol Chakouba day amongst daughter-in-laws creating negative vibes within the family.

Madam Saroj is a strong and determined woman and she hopes in bringing the true colour of Ningol Chakouba. She feels hopeful of the fact that the essence of Ningol Chakouba is not lost when she experienced the mass Ningol Chakouba performance at different places in Manipur organized by different social organizations. The unity of ching-tam (hilly and plane) and its people beyond caste, creed and social status through Ningol Chakouba is a symbol of prosperity and liberty. She leaves a message to the people of Manipur to observe this festival within limit and have no extravaganza.