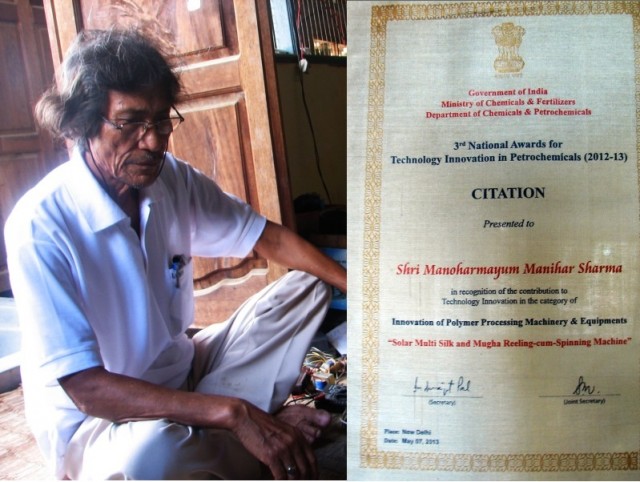 “Although I have been designing innovative technologies and devices and provide jobs to many youths for since past many years, I have not received any financial assistance from the state government so far. As innovative pursuits require huge financial involvement, it is a Utopian task for poor innovators like us to go on with this venture without state patronage. Our government seems to have ignored my works. Lack of state patronage has discouraged the innovators in their innovative pursuits”.

Manipur’s Pioneer Innovator and National Innovative Award winner Manoharmayum Manihar Sharma of Nongmeibung, Imphal East talked to Manipur Times recently. He expressed his desire to open a big workshop for making many innovative machines and devices before he breathes his last.

It is astonishing to note that Manihar Sharma, the innovator of these technologies is a matriculate. Despite his many innovative works, he is working without any state patronage and recognition.

Second eldest son among seven siblings, Manihar Sharma, lost his mother when he was eight years old. He was brought up by his aunt. His father, priest by profession, was a good scholar of Sanskrit. After Manihar passed Class II, his father shifted him to a Sanskrit school which did not go well with him. He left the school and completed his studies till Class VI privately and resumed regular schooling thereafter. After matriculation, he left his studies due to financial problems and got married in 1972. He then started working as a labourer on muster roll for two years with the Engineering Department, Thoubal. The job was on daily wage basis.

Manihar left the job and worked as a salesman in a shoe shop. He left the job again because of his bad health condition. He then decided to drive an auto rickshaw. His irregular eating habit had an adverse effect on his already weak body and left the job in 1992. He started a restaurant in 1994 which ran well and helped his family maintenance to some extent. One day, during a regular health check up, his doctor friend asked him to join his clinic. Initially, he was a bit skeptical but later decided to go ahead as the job gave him plenty of time for his other innovative pursuits.

Since childhood, he never played with anything bought from the market rather he always developed his own stuff like toys and small machineries. As a young man, he mastered all the nuances of repairing and maintenance of light vehicles and other engines. His constant inspiration has been his mechanic teacher, who used to repair or modify complicated and advanced machineries without any use of sophisticated tools and equipments. The mechanical tips and logical but informal steps, shared by his teacher have been the backbone of his innovative spirit.

Automatic Pump Operator – While working with his doctor friend, the sight of the water overflowing from the overhead tank in the nearby houses used to disturb him because his family members had to walk a long distance to fetch drinking water. He thought of a machine that could minimize the wastage of water and physical activity. Soon he started working on his innovation –Automatic Pump Operator. A crude prototype of pump operator made in 1997 boosted his spirit but lack of money discouraged him. Fortunately, MASTEC helped him to get the technopreneur promotion programme support in 2005-06 for the prototype development of his machine.

Automatic pump operator machine invented by Manihar Sharma is a hassle free household water management device that integrates the ground reservoir, water pump and the overhead tank. Using a central control panel, the pump switches on automatically as soon as the overhead tank goes below the threshold level and switches off as soon it gets full. It also takes feedback from the source of water (reservoir ground or overhead) to check if there is enough water. When there is little or no water, the APO does not switch on the pump. Thus it prevents damage to the motor. In the most advanced version of the APO, Manihar has incorporated a system such that the feedback is available from multiple overhead tanks and the ground reservoir as well.

The overhead tanks can be at different heights. If there is a surplus in a particular tank and deficit in another, irrespective of the fact whether ground reservoir has water or not, the APO can switch on the motor to pump water from the tank with surplus water to the one with deficit.

Innovative Dryer – This machine is a simple dehydrator with an efficient mechanism. Hot air is blown into the drying chamber from below with the help of normal heating rods and air blower. Every layer of the drying tray is attached with an air guide that provides uniform distribution of hot air. On the upper corner of the machine, an exhaust fan continuously takes out the moisture. Preliminary trials indicate much faster and more uniform drying process for fruits and vegetables. One more advantage of the machine is that it can be run by a single phase power which means any domestic line can be used. It saves energy. A similar capacity of standard dryer runs on 15000 watts while the present machine consumes only about 6000 to 8000 watts.

Incense Stick (Dhoop) Making Machine – His wife used to make the incense sticks manually to generate income for the family. Her pains made him to innovate a dhoop stick making device. This manual device has two blade arrangements, one for making small bamboo splints and the other for making small sticks. For stick making it has multi-bladed arrangements for different stick sizes. Both the blades are fixed on two sides of a small wooden block.

Solar Multi Muga Reeling Spinning Machine – This machine is a small portable, durable, and can function like as much as large machine can perform. It is a latest invention with a dimension of 28x20x12 inches. It consists of five reeling heads and each head have a separate five switches button, the button can switch on or off according to the condition. While one thread reeling head does not function, other remaining heads can work. The reeling head consists of one plastic gear group along with a bobbin. At the tips of the feeding pipe there is a gear to adjust or control the speed of the machine. This machine can run by a solar plate of 17v to 15v. The present reeling machine is quite different from traditional or local hand-made or pot reeling. It saves time and labour capital giving the finest thread.