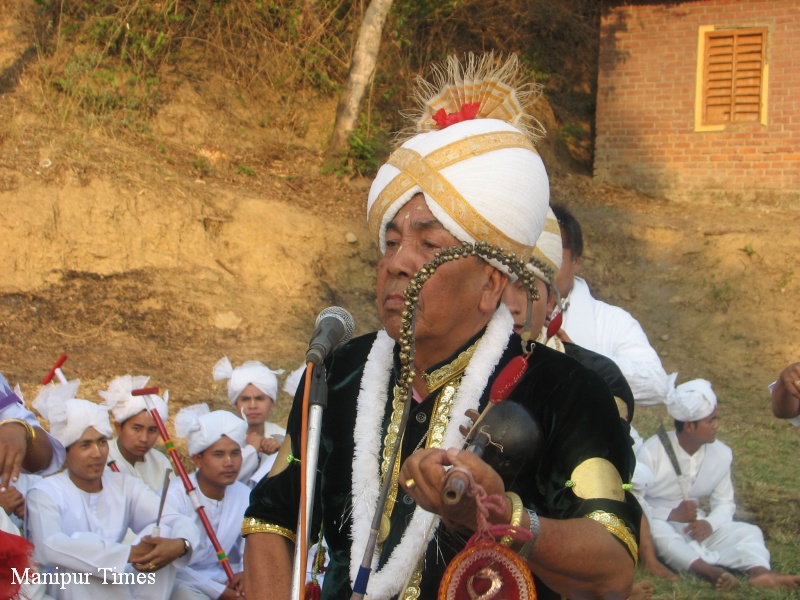 Sinam Achaouba hails from Kakching Khunou Thongam Mondum Awang Leikai of Thoubal district. In olden days,   learning an art form from a guru was not simple. The learner’s passion towards the art form and his obeisance to the guru were extensively tested for long.

Sinam Achouba stayed at the residence of guru Ningthouremba for many years to learn the art of pena. He helped his guru and family members in different types of manual works during his stay.

Sinam Achouba’s family originally came from Moirang. During the World War-II, their family fled from Moirang and settled at Kakching Khunou Thongam Mondum. Though he did not get formal education, he learnt pena with a great enthusiasm. His forefathers were great pena performers, and he had to carry the legacy forward. He started learning ‘pena phamsak’ when he attained 35 years of age.

Sinam Achouba Meetei, Manipur’s renowned pena performer who has made superb contribution towards preservation of the indigenous music of Manipur was conferred with the prestigious ANJI Award (Waikhom Babudhon Award 2013) in recognition of his great contribution in the field of pena music in a grand function held on 15 April 2013 at Anji Cultural Academy, Kongba.

“Pena is not just a simple musical instrument which serves to entertain the audience only. The instrument has a close affinity with the evolution of the mother Earth. It also has medication elements. In olden days, a pena performer could heal various ailments. Pena occupied high esteem in olden days. Meetei kings used to accompany a pena performer whenever and wherever he ventured out from his palace. King Chandrakirti accompanied a pena performer during his Jilla Darbar trip to interpret the topographies and entertain him. Pena can be described as the Royal Court music of the Meeteis”, observed Achouba.

Although, Manipur is a tiny State, it is known by the world for its high aesthetic values of art and culture. Being a folk art of Manipur, pena embodies the rich heritage reflecting the mythology, philosophy, history, lifestyle, rituals and others of the Meetei and. Every component of the instrument and verse of pena music has its own aesthetic values. The melodious music of pena is the creation of two important parts of the instrument – Cheijil and Tha.  It is like a violin. Cheijil is regarded as father while Tha is mother.

Pena is the oldest art form of the Manipuris, as such it is the treasure trove of tales of Manipuri civilization. The more we research the art form, the more we learn and reveal the tales of our past history.

Due to various factors, pena phamsak is diminishing now in the contemporary Manipur. It is a fact that the Art and Culture Department as well as the people of Manipur have failed to promote this aged-old indigenous art form thereby leading to diminish the aesthetic values of pena art day by day.

In the light of the above mentioned alarming situation, survival of the pena art form has become a big question now. Preserving the indigenous art forms is a must to protect our real identity intact.

As Manipuri is a tiny community, our identity will get corrupted in course of time unless such indigenous art forms are preserved, said Achouba.

“With a view to popularise, rejuvenate this important indigenous art form, learning of pena needs to be institutionalised. So far, Government of Manipur doesn’t take up any action regarding institutionalisation of pena learning. For the revival of the pena art, patronage of the State Government is very important.

At present, pena learning is done in traditional style and the number of pena learners is less. There is no formal institute even if an enthusiast wishes to learn pena music. He has to go to a teacher and learn it in private.

“About 4-5 students are learning pena music under my guidance. I wish to set up a pena learning institute at my home before my death. For it, I am ready to dedicate my own land whatever needed for construction of the building if the Government gives him some grant-in-aid,” said the 71-year-old  pena artiste who wishes his dream to be realised before his death.

Pena performers, without any script of its own, recites stories with highly literary verses shaped entirely with their intelligence and oratory skills. It is the skill and intelligence of our pena performers. Pena artistes recites the folk tales of Moirang Kangleirol like Khamba Thoibi, Kaboloi Thaba and other recitals related to Lai Haraoba and so on, said Achouba.

Pena Achouba has given good performances in many Lai Haraoba festivals of the Meeteis. Pena is part and parcel music of Lai Haraoba ceremonies that any ritual of Lai Haraoba cannot be performed without a pena.