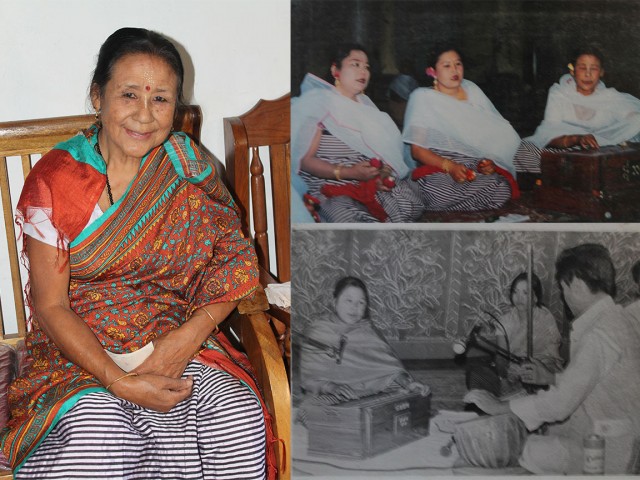 “Music is a tough art limitless to learn. It is a panacea for the ailing, courage for the weak and sheltering tree for the restless. Good singer depends on good voice. We have many things to learn in the art. I feel shocked to see the budding singers setting their foot in the field of earning with the profession even before they get fully matured. Contemporary singers should learn the art properly to be great singers and pay due respect to the senior artistes,” said 77 years old veteran singer Chongtham Sanatombi.

Born on October 22, 1938, Thokchom ningol Chongtham ongbi Sanatombi Devi was brought up from Sylhet Khunou in Bangladesh to her beloved parents (Late) Shri Thokchom Joykihor Singh and (Late) Smt  Dhanabati Devi. She is the fourth amongst five children. She had two elder brothers, one elder sister and a younger brother.

The whole family of Sanatombi Devi migrated from Bangladesh in the year 1947 fearing the repercussions of the Indo-Pak partition and settled at Nabadwip in West Bengal, India. Her father wanted her to be a great artiste. While staying in Nabadwip in 1947 when she was just 9 years old, she was initiated to the world of Music by her Guru Asem Ongbi Chobi Devi popularly known as Wangoi Chaobi who was also residing at Nabadwip at the time.

Teachers behind her success in art

She was a musically gifted child. It was at Nabadwip in Bengal at the age of 9 when she was initiated to the world of music by her Adi Guru Smt. Wangoi Chaobi Devi in the year 1947 who was also living at Nabadwip by that time. Under guidance of Wangoi Chaobi Devi, she debuted in a Manipuri classical dance “Ras-Lila” wherein she played the role of Radha in a function. Wangoi Chaobi taught her Sankritan, Bengli Kritan and playing of Harmonium instrument. As the teacher advised her to learn music of the communities, she learnt singing of western music, Khaliya (Ale Ale Ale…Lok Aleto wan Yareplend), Nepali (Kolti par Neharnuhora Manipuri Ketilait dekhero), Urdu, Bengali, Hindi and Assamese. She could win high public accolades for her talent and skill in dancing and singing and from that very day she started to flourish as a young child dancer and singer.

In 1956, she learnt singing of Nimai Sanyas under the guidance of Guru Anandamay Bandhopadhyai at Nabadwip. She also got the opportunity to learn Man Bhanjan from Oja Moirang Ningthou of Kangjabi who visited Nabadwip in 1957 and in the same year she completed learning the chapter of Naoka-Bilas from Guru Lalbabu known as Japan Tonu who was on tour at Nabadwip. She learnt three hours long Geet Govinda from Oja Hijam ongbi Sanajaobi, Ravindra Sangeet from MK Binodini, L Gourahari and Harichoron. With lessons in various singing styles from learned teachers, Sanatombi Devi still captures the imagination of various music lovers of Manipur.

Her Advent to Manipur

After her learning from her Gurus, she frequently visited Manipur as a part of conducted tours of dance and song shows based on the above Nimai Sanyas, Naoka Bilas and Man Bhanjan and she became quiet prominent in this field. Pas Khela (originally Paasa Khela) a dice game evolved out of these shows. As her interest was confined to only dance and music, she could not continue her academic career after class three.

In 1960, Sanatombi became an approved singer of Manipuri Adhunik (Matam Eeshei) songs at the All India Radio Guwahati Station. She worked as a music instructor at the Manipur State branch office of the Indian Council for Child Welfare at Moirangkhom. She also served as music instructor at the Bhaktivedanta Institute Mission Higher Secondary School at ISKCON. On the other hand she also teaches music to the members of ISKCON Women’s Forum.

Nowadays she enjoys singing Sankirtan on different occasions in various parts of the state. She also performs in stages to enthrall the crowds at various musical shows across the valley of Manipur where she sings her golden hits to music enthusiasts.

Sanatombi was honoured in the field of Arts and Culture, Manipuri Adhunik (Matam Eeshei) by the then Chief Minister of Manipur RK Ranbir Singh in the year 1991 during a Republic day function. She was also honoured with the title ‘Sangeet Ratna’ and a gold medal in 1999 by the Arts and Culture Dramatic Association Moirang.

Moreover, Sanatombi Devi was awarded Lifetime Achievement ‘Maibam Haricharan Award’ in the 2000 by ROOP RAAG on its 40th anniversary celebration held at MDU hall. For her contribution in the field of Manipuri Matam Eeshei, Sanatombi Devi was given the Certificate of Recognition by Apunba Manipur Matam Eeshei Kanglup (AMMIK) in the year 2005. Manipuri Sahitya Parishad also conferred Sangeet Bhusan award to Sanatombi Devi in 2010 in recognition of her contribution in the field of art and culture.

Places she visited for performance

I did not know singing could make earning. When I was 20 years, Oja Chaobi bought a land at Nabadwip for my family with Rs 7000 which was saved for me without my knowledge. After some time, I came to Manipur and settled at Chekon. I set my foot in Paskhela with singers like Bimola, Sundari and many others. In the group, there was Ngangbm Rnganath, clarinet player who happened to be close friend of my husband.