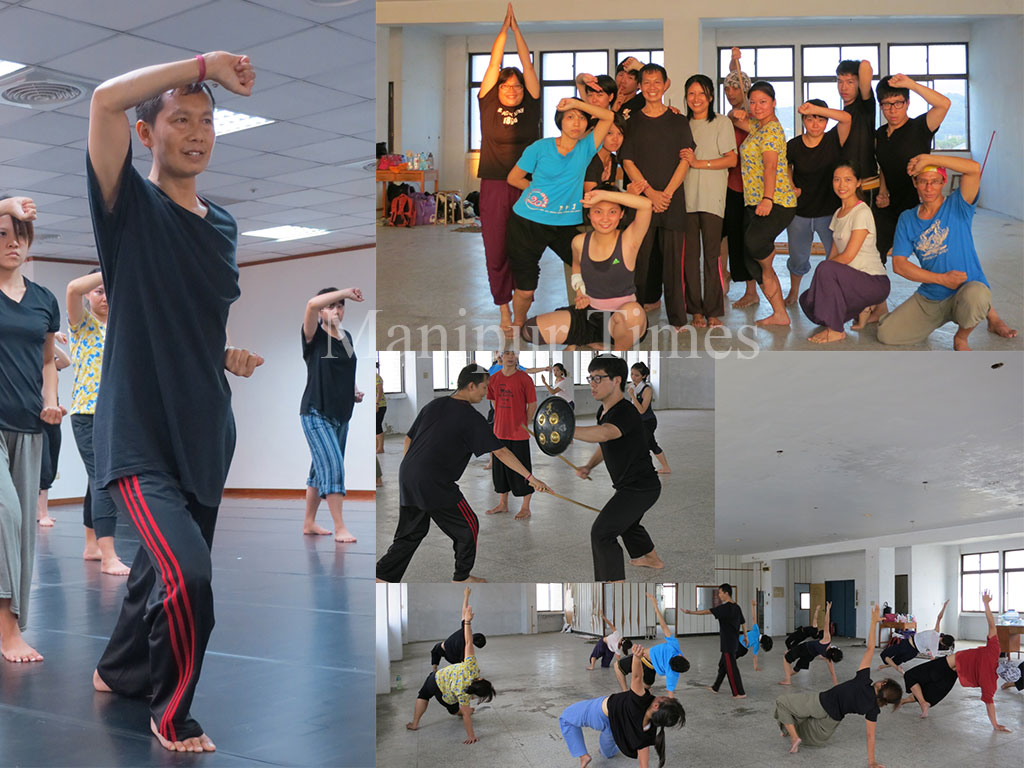 Parents are happy to come at my residence as their kids learn punctuality and culture. In martial art one has to know self, perfect self. We have to know the potential of the individual self. It is a much to acquire total self-confidence. If I beat or defend I have to have confidence which is applicable in all life.

In book you can copy but in martial art if you copy you might get hurt so there is no unfair means when you are on the bout. These are very interesting parts”, says a soft spoken Chingtham Ranjeet Khuman who have shown his performance in 26 countries bringing recognition for an excellent Manipur.

I was in HULA for 25 years.  During my training days also teachers do not take fees so I follow the trend. There is no state government support personally it is my passion that I trained the interested candidates at my residence.  There is no livelihood out of this profession.

Only the poor and middle class family preferred culture and sports. Rich family did not give a hitch about it. Whereas it is not in other states.

Kerala claimed that their martial art form Kalari Payatu is the best in India. In the case of Thang – Ta the Ministry of Culture, Government of India recognizes it as a cultural activity whereas Kalari Payatu of Kerala is recognized as other art form. Scholarships, fellowships are given by the ministry for researches on Thang Ta after recognitions and the trend is continuing”, he continued.

Chingtham Rangeet Khuman is a winner of Manipur State Kala Akademi Award in the field of Thang-Ta for the year 2010. Presently he teaches Thang – Tasince 2011 at Chingtham Mandap under the organizationKanglei Saktam Langba Kanglup. , he was a  Senior Instructor Thang-Ta at HULA Sindamsang,Imphal from 1988 to 2005,Casual teacher of Thang-Ta at the Jawaharlal Nehru Manipur Dance Academy, Imphal from August 2005 to April 2006.He has also won several scholarship from the Ministry of Culture, GoI.

“After 2011 when my teacher passed away I started teaching students at the Mandap and it is carrying on till now and would continue for the love of preserving culture and art.  His residence is at Chingtham Mandop Hoabam Marak Irom Leikai. My teacher was Sinam Devabrata of Keishamthong Leishom Leirak who founded HULA SCHOOL. My youngest student so far is a 7 year old boy. Most of the students are teenagers who are 17 years and below. They are from locality and far off places in Manipur. Two of my students have got fellowship from the ministry of culture GoI. Potsangbam Nganthoiba got a scholarship under CCRT and he will be getting the same until he is a graduate. He is just 15 years old now. Another student Takhellambam Rabi, for two years scholarship from Ministry of Culture, GoI for the peiod 2014 to 2016.

I also teach aboard. In Taiwan I was invited to teach martial art. Also some Bangladesh students want to learn martial art and they came until Kolkata and I taught them in Kolkata. Japanese and Poland citizen came at my residence and learnt the art form and left for their country”, says Chingtham Ranjeet Khuman..

Interestingly he has assisted in choreographing martial art performance in one of the Bollywood movie songs for OMKARA movie. 18 Thang – Ta and Pung artists performed for that song which was rated number one in the chartbusters of various channel for quite a long time.

He used to earn when he gives classes aboard or from the visiting foreigners who came to learn Thang-Ta.

“Nowadays it is hard to find a martial art teacher. I am still a learner. Martial art is one form of Art which goes deep and deep as we learn.

In the future I would like to have a cultural institute. I have seen many institutes as I have been touring around and I cherish to have my own institute.

I provide all the equipment when my students came to practice martial art”, says Chingtham Ranjeet Khuman who is working hard to preserve and culture thang-ta martial art from his own cost and means.

“ Thang ta is helpful in day to day life. It is helpful in the utility of time. Perfect timing habit. Cultivating time efficiency. People regard us because of punctuality when I toured outside”, he continued.

Few picks from his film and theatre work on thang ta

1)  Assisted the Documentary Film of “THANG-TA” directed by A. Syam Sharma     under the sponsorship of IGNCA, NewDelhi.

2)  Assisted in the Film “SHINGNABA” directed by Aribam Syam Sharma.

1) Choreographed and directed the fighting sequences of the Animation film ARJUN, produced by UTV Pvt. Ltd., Mumbai, in the month of Sept. 2008.

2) Choreographed a dance presentation of Dhol & Dholok Cholom for the Republic Day Celebration 2000 at New Delhi, performed by the Children Contingents of Manipur and bagged the 3rd position.

1) National Award 2012 in the field of Thang-Ta by Irabot Memorial Charitable Trust, Manipur.

2) Manipur State Kala Akademi Award in the field of Thang-Ta for the year 2010.

3) Received Senior Fellowship for two years in the field of Thang-Ta from Ministry of Culture, Govt. of India, New Delhi in the year 2010.

4) Received Junior Fellowship for two years in the field of Thang-Ta from Ministry of Tourism and Culture, Govt. of India, New Delhi in the year 2000 to 2002.

5) Received Fellowship for two years in the field of Thang-Ta from Manipur State Kala Akademi, Imphal in the year 2000 to 2002.

6) Received Scholarship in the field of Thang-Ta (Manipuri Martial Art) from the Ministry of Human Resources Development, Department of Culture, Govt. of India, New Delhi in the year 1992 to 1994.

7) Received Scholarship in the field of Thang-Ta (Manipuri Martial Art) from Manipur State Kala Akademi, Imphal in the year 1988 to 1990.