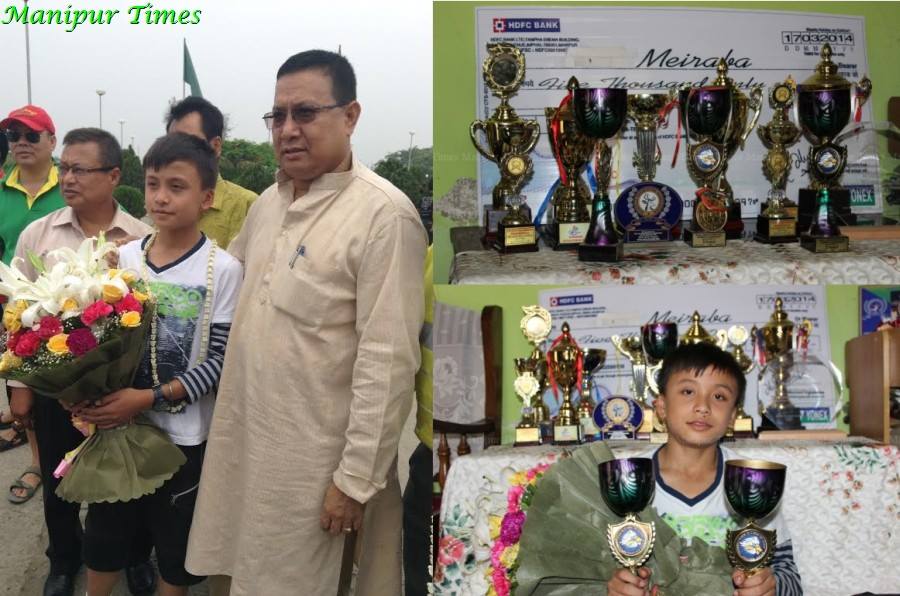 It was around morning 9 a.m. of May day, the Imphal international Airport was filled with crammed full of badminton’s lovers, supporters, cheerleaders, players, and the members of Manipur Badminton Association (MBA) from the state, waiting impatiently for the landing of Indigo flight no. 6E22I to received the 13-years-old young badminton wizard Meiraba Luwang, the Indian Rank No.1 badminton player from the state (for under 13-category), who recently took the championship, one at International level tournament that was held at Denmark from 17th to 20th April 2014 and another at National level tournament that was held at Agra recently.
The reception function was held at MBA Indoor Stadium near DM college, Imphal in a simple but gracious way. And according to an information from association vice president of MBA, they are awaiting for a grand function od reception for Meiraba, which’s likely to be held on 3rd or 4th of this month.
One Chitaranjan from keishamthong, who is also one among the vice-president of MBA and a reknown Sr. coach from the state, said to Manipur Times that the grand reception function, for Meiraba victorious performances, may have the possibilities to be held during the ensuing days of ‘3rd Non-State Badminton Championship Tournament, 2014’, which would held during 6 to11 of May. He further added that this tournament is especially organised and designed by the Association for those promising newbie players who never have had accented to national or international badminton court representing the state.
And he further lauded Meiraba’s father Romesh Luwang for his extra-efforts given towards his son Meiraba for his advancement in performances. And, he further maintained that Luwang’s enthusiasm and fanatical attitude toward the game is very rare and unique, comparing with other parents. So, that the reason why his son was enable to become a batminton Champ from his tender ages.
He further added that the majority players from state that have represented the state at national or international tournaments are guided through the association’s thoroughly channels, as any individuals players can’t represent the state without eluding the selection, approval or recommendation process and guidelines of the association. And so far majority players who have represented the state at national or international levels tournaments are the products of the Association.
The gracious reception function was attended by president of Manipur Badminton Association, Bijoy Koijam, who is also the president of Manipur Olympic Association (MOA) as functional Chief guest, and other important personalities of MBA; for instance MBA’s secretary; vice president; and thier members, beside players, cheerleaders, sports encouragers and his familiy and relatives of this young ace-player. Around more than hundreds of people from various walks of life took part at this simple but gracious function.
At International level, Meiraba took the championship medals, for both Single and Double at, AROS CUP Youth International Badminton Tournament, 2014 at Viby Denmark, after knocking down five contenders from German, Denmark and England by simply butting against with 5 rounds at single boys category. And, for double category, he partnered Rory Easton from England and and beaten-up Simon Bay and Mouritz Troels from
Denmark scoring 21/7,21/13 and clutched the championship title by succeeding six rounds of engaging combat at the international court at Denmark.
And, at national level (for under-13) he also became the champ at ’59th School National Badminton Championship, India that was held at Agra, where he overpowered Pawan Krishna from Andhra Pradesh. For this tournament, the entire team from the state was guided by his father Romesh Luwang as Team Coach and Athoi Kangmei as Team Manager, who is also a physical teacher at state Sport deparment. Among the 10 players from the state that took part at the tournament, Meiraba Luwang is the only one who brought laurel wreath in the state, in which 5 players are picked out for below 14 category, and another 5 Players for below 15 category.
From 2010-2014, for under 13 & under 15 Category, Meiraba has received tentatively nearly 16 Medals in sum; International-3 Gold, National- 4 Gold and 1 Silver, State-9 Medals, excluding the recent 3 medals that he have won, —- two international at Denmark and one at national level at Agra. And he is also the first youngest recipient of Olympic Gold Quest scholarship from the entire northeast region under the Junior Scholarship Athlete (under 13 category).
While Manipur Times having a quick conversation with Meiraba’s mother at her residence, just after the reception function, she said, “Since he left for Denmark and Agra tournament, I stayed so anxiously waiting for the tidings about his performance status, but good news about his winning consecutively gave me an ease of mind”. And Meiraba’s father Romesh Luwang is currently travelling, to back home from Agra, with the entire state team who have gone to participated 59th School National Badminton Championship, India’ at Agra.