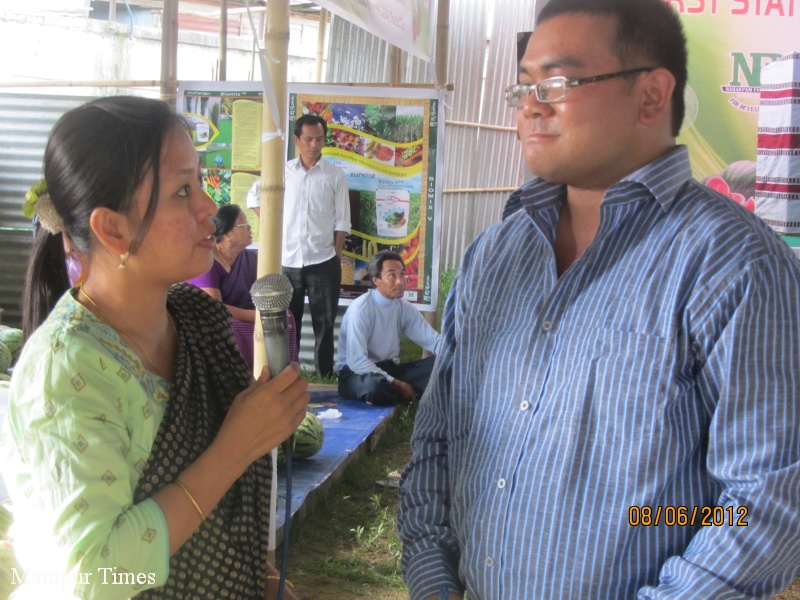 “I was inspired by the odd experiences of my life to own a company. I cried a lot when I had to do odd jobs like washing dishes in a restaurant when I was in Melbourne. However, it gave me the courage to achieve my aim in life.”  This was stated by Santa Singh Nahakpam, 31, from Yaiskul, one of the youngest entrepreneurs of Manipur and the proprietor of Nahakpam Food and Beverages.

Freshiesfresh is an Idea to connect Farmers and their products directly to the customers. In Today’s busy world we actually do care what we eat but we actually don’t have time and ways to find how the Fruits and Vegetables we eat are grown.”

Shanta’s company owns Boss Juices, a cafeteria at Sagolband on National Highway-37 (Imphal-Jiribam road). Items which are being served in this cafeteria are fruit salad, green vegetable salad and fruit juices. Manipuri actor, Sophiya Mayengbam is the current brand ambassador of the company.

Production team, administrative staff and marketing team of the company have been trying hard to control the market. The company will complete two years of its service in May 2013. Within this year, the company is planning to open its second cafeteria. As availability of fruits is seasonal in Manipur, the company is aiming to add a few more items like pastry and baked chicken chilli (oil free).

Narrating his experiences to Manipur Times Shanta Singh Nahakpam said that when he was in Melbourne he worked as a production quality in-charge in Pepsico. But he also used to work in a restaurant as a dish washer to earn extra money. At that time, he was so busy that he did not have even enough time to have meal.

The work permit allowed in Melbourne is only 20 hours a week. It can be covered only in three days. He earned about 15 dollars per hour after deducting tax. But he wanted to earn more money in the spare time. That was the reason why he joined a restaurant as a dish washer.

Shanta said, “Even though I used to wash dishes in a restaurant I also worked in Pepsico and there was no difference between a dish washer and a white collar employee. After finishing my work as a dish washer I could enjoy the life of a normal person at the end of the day. But in Manipur, people are classified based on their jobs. A labourer leads life like a labourer, a director behaves like a director and an actor acts like an actor. I want to wipe out this culture from our society”.

Regarding his future plans, Shanta said, “We are targeting to develop a turmeric packaging factory at Wangjing Tentha Lamkhai. Our plan is to control the market of turmeric by planting it in large scale and then package it in our state itself. Since this product is abundantly produced in Manipur it is meaningless to depend on other states.”

When he came back to India after completing his Master’s Degree in International Business in Melbourne, he consulted a lawyer from Delhi regarding the establishment of a company in Manipur. But he found the norms of setting up a private company as very complicated. The lawyer suggested him to set up a company in proprietorship type.

Shanta wants all the Manipuris to get ready for the advent of train service in Manipur. Instead of trading only the imported products, the people of the state must also export products of Manipur to other states.

Nahakpam Food and Beverages came into existence in May 2011 after Shanta returned to Manipur in November 2010. The main office of the company is situated at North AOC, opposite to Kekrupat. It handles the marketing and other activities of the company.

The company is associated with about 800-1000 fruit farmers through its feather association, Nahakpam Foundation for Development.

“We can change the trend when we produce the raw-materials in our state. We have the capacity to supply the raw-materials if we work together with the farmers.  With this vision Nahakpam Food and Beverages formed a feather association called Nahakpam Foundation for Development”, Shanta said. He is the secretary of this NGO.

Nahakpam Food and Beverages organised a ten-day watermelon festival last year. However the company did not get any support from the Government. 150 tonnes of watermelons were showcased during the festival.

Nahakpam Food and Beverages is now listed in Limca Book of Records for preparing the longest salad (100 metres) during International Chinjak Festival 2011.

The role of Nahakpam Foundation for Development is to develop farms for the company. This year, the foundation is farming watermelons in 125 acres at Kakching, Kakching Khunou, Langmeidong, Langathel, Wangoo, Terakhong, Naodakhong etc. The company distributed about 13 kg of watermelon seeds to a number of farmers. 50 grams of watermelon seed costs Rs 349.

“In this regard, we did not get any support from the Government”, Shanta said.

Shanta added, “We are trying to connect and support the farmers who are residing in interior areas. One has to fight himself with his idleness if he wants to be an entrepreneur. He should be a dutiful and a capable person.” This is Shanta’s message to those who want to become a successful entrepreneur.

“We do not appoint Queen in the festival of Watermelon which kick-starts from last year. This year the festival falls around May and we are keen in promoting the farmers. Last year we did organised a fashion extravaganza participated by Fashion Icon Nirmal Kangjam and other model attired in farmer’s dress and the lifestyle they lead” says Shanta.