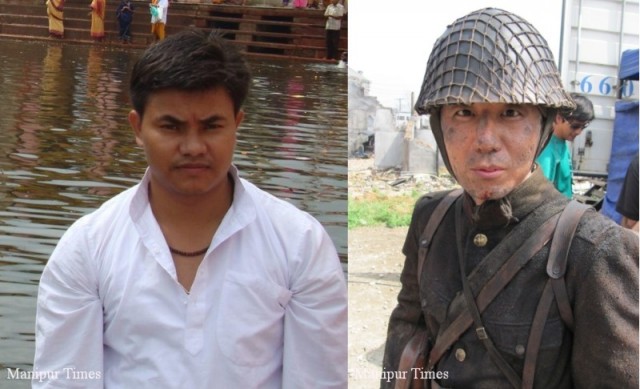 “Since time immemorial there has been a strong bonding between the people of Manipur and Japan which will never be ceased. Every year many Japanese visit the State and used to pay homage to their forefathers who have lost their lives during the Second World War. They have come with a cause which we have never heard or know much. There were also many instances where Manipuri and Japanese have worked together. This incites me to conduct in-depth research on the subject matter. Whenever we see any war films related with Japan, they always get defeated by the so called Allied forces. Looking at the connection, I thought of making a film purely based on the facts finding which is not included on any books written by western authors, scholars and war veterans and which could rely on the actual records narrated by Manipuri forefathers who have associated with the saga”, says Mohen Naorem, Director and Producer of the much awaited flick “My Japanese Niece”.

Among some noted film makers who have been promoting the Manipuri film industry in global platform, Mohen Naorem is one among the list.

He is the founder of Legend Studio, a global film making company promoting independent filmmakers and talents focusing in making feature films, shorts documentaries and animation particularly focusing on making historical movies related to Manipur and issues of Manipur for the global audience.

Established in 2009, the studio within a short span of time has become one of leading global studio having its branches in South East Asia as well as in European countries. He has collaborated with many filmmakers based in Korea, United States, Germany, and Russia and even in South East Asian countries with the common thinking which is to spread and instigate messages on different issues in the form of an entertaining medium. The studio as a part of video funding project where film makers are supposed to submit synopsis to fund providers of the project has contributed 40 films so far starting from 2012.

Since childhood he was interested in film and its importance in society. He has come from a humble background and his family too have little knowledge on film and entertainment. However, his love for the art and confined to master course in mass communication did help him in entering to the film world. From early days, he was vastly exposed to different form of activities like film directing, script writing, camera handling and learned how to convey message to mass public.

My Japanese Niece by Mohen Naorem
1 of 7

As it could not create much impact, he was looking for another way in the form of a medium where the mass public can grasp and understand easily. After a certain thought, he realise that film is a kind of medium best suited to the State as people understand the art form precisely.

His latest much-talk movie “My Japanese Niece” is based on a Japanese soldier and his association with the State. The journey of the film started from a facebook page which Mohen and his core team created to raise fund following the massive earthquake occurred in Japan few years back. By doing so, they got overwhelm response through the page and met with some Japanese counterparts. And, particularly the Manipuri diaspora staying in different part of the world also expressed willingness of providing assistance on the cause. Through the process, they realise that the sentiment, love and bonding of Manipuri towards the people of Japan is so strong.

The story line of the film is based on a Japanese soldier who arrived in the State during the Second World War. There, he was given duty of a sentry in a remote village. During the course, he became friend with a Manipuri. The duo used to visit at Allied forces camp area mainly dominated by the British and collect information on about their plan and movement. In an incident, the Manipuri friend was seriously injured in a bomb attack and on his dying bed he requested the Japanese to look after his daughter as his wife was also killed in alike bombing. There, the Japanese accepted the request and decided to adopt his friends’ daughter. At the same time, he was also supposed to follow orders of his seniors where he was told to safeguard some important documents and continued working as a sentry. However, the Japanese did not return to his duty even after the war. He decided to stay back in Manipur by not returning back to his native country.

The cast and crew members of the film included bunch of many renowned actors. The lead role of the Japanese soldier is being played by Junichi Kajioka, a London based actor who has acted in some Hollywood movies. Yu Asada, played the role of the niece. Besides, there are also many actors from Thailand, Korea and even from the State.

The film focuses on the three main roles – the Japanese soldier, the niece and the adopted daughter (which will be played by a local actor).

“The main roles characters have been entrusted to Japanese because we want to add more lives, originality and essence of reality mainly to the script. Having said that I didn’t meant that the State’s actors are not up to the mark. It’s just the demand of the script of the film. And, moreover we are also targeting global audience. In such, the cast and crew clearly come in perfect place”, he exudes confidently.

Technical staffs, equipment, lighting, costume and make-up artistes have also played pivotal role in making the film. Since it is a war film; the shooting team had to procure fire crackers and other needful from outside the State as the said materials are not available in local market.

The estimate budget of the film is whopping Rs 1 crore and is set to release in many south east countries including Malaysia, Thailand, Singapore, Korea etc.

“The budget amount may sound high as compared with other State’s film budget, but comparing with the film’s casting, high quality technical equipment, camera etc it stand short. Somehow the team manage in financing the film with the projected amount”, opines Mohen saying that he would want to dedicate the film to the deceased Japanese soldiers.

Around 80 per cent of the film’s scenes have been shot in Imphal area only. Few scenes are also shot in Japan. It will be released probably by late August of this year. They are also planning to release the film in some major cities including Tokyo and also will be screened in International Film Festivals.

Mohen had started making Manipuri feature film since 2006. In 2009, the film “School Karusi” was produced under his own production banner. The theme of this film is based on harm inflicted to students caused by bandh, curfew and blockade. His other film titled “The Uprising” (50 min) is based on the July 18 incident where 18 people got killed and several left injured when trying to protect the integrity of the State. The film narration and story line is purely based on the event footages. It will be released on June 18 of this year.