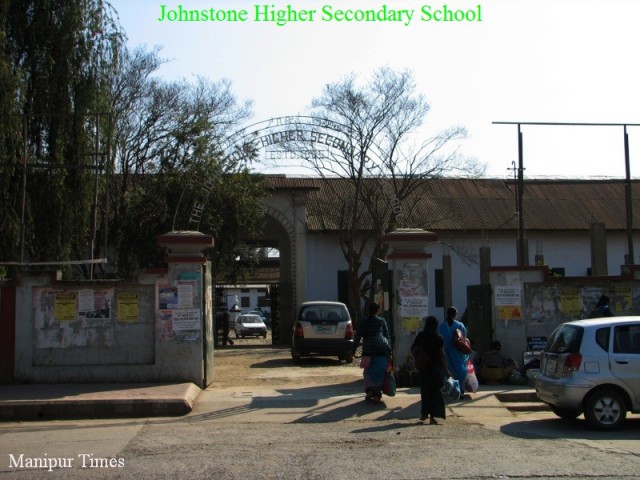 “It is a fact that among the Government teachers, there are many well trained and they are not weaker than those of the private schools. Why the highly paid Government teachers fail to produce position holders in the exam while the less paid teachers of the private schools produce many position holders is a frequently asked question in Manipur. There are many reasons behind the failure of the Government schools in Manipur.

Lack of Monitoring and Control is one of the major causes behind the failure of Government schools. Co-ordination between the teachers and the parents is the need of the hour towards the struggle to improve the government schools. Negligence of government properties is a thinking habit of our people which needs to be rooted out at once”

This is the observation made by Wangkheirakpam Chaoba Devi, Principal of Johnstone Higher Secondary School, Imphal during a recent Interview with Manipur times regarding the improvement of the Government schools in Manipur.

The school authority always tries to keep up the achievement

During the reign of Chandrakriti Maharaja, the king of Manipur, the foundation stone of the Johnstone M.E School was first laid in the North Eastern corner of the residency of the political agent (now the Governor’s residence) in 1885. It was named after Major general Sir James Johnstone (KCSI), the then political agent of Manipur.

It was upgraded to a fully fledged high school in September, 1921.

Wangkheirakpam Chaoba Devi, Principal of the school said that around 1000 students are now reading in this school. With a view to bring out more talented students, the school authority is investing all the required efforts to educate the students. For those weak students, special classes for 20 days are conducted.

In modern times, relation between teachers and students seems to break down. In past, students regarded teachers very much. Lack of discipline on the part of students is a bad impact on the society.

To improve the moral discipline, students who are well disciplined will be given grade A+ or B+ in the HSSLC exam as a part the CCE (non scholastic area) newly implemented this year by the Govt. of Manipur says the Principal.

Regarding the improvement of the government schools, she observed that there are many factors behind the backdrop of degrading quality education on the part of the Government schools. Strict monitoring of the activities of the teachers, fulfilment of the present shortage of infrastructures of the Govt. schools need to be strengthened by the authority concerned.

In Private schools there is strict monitoring and the school authority has the power to dismiss any teacher neglecting duties. Hence, teachers take their duties seriously while it is not so on the part of government schools.

The principals/headmasters in the government schools are titular and enjoy less power that they find it hard to control the staffs neglecting duties. When the principal takes up action against those teachers, there come many political pressures. For good control of the staff, strengthening of the present power and function of the principal/Headmasters is a must.

The higher secondary school has excelled and the pass percentage in Council exam is high every year. Mention may be made that at one point of time the school was the best school and many students who have passed out from the school have excelled in the life.

To the present day the school is performing. About the structure of the school building mention may be made that the room of the administrator are stationed at a corner such that he sees the entire classroom and the campus of the School from the place where he is seated.

The structure build by the British is standing strong till today. Manipur government through special package have constructed new building structure as part of up gradation.

Among the performing government higher secondary schools, Johnstone is one of the most sought after School. Every year many students thronged for admission from different part of the State.

Located in the heart of Imphal the school is well known by many and the legacy still continues. However there is always room for improvement as the Principal of the school believes. Dedicated administrators and honest teachers are in the rescue to save the School and we can still hope for the best.