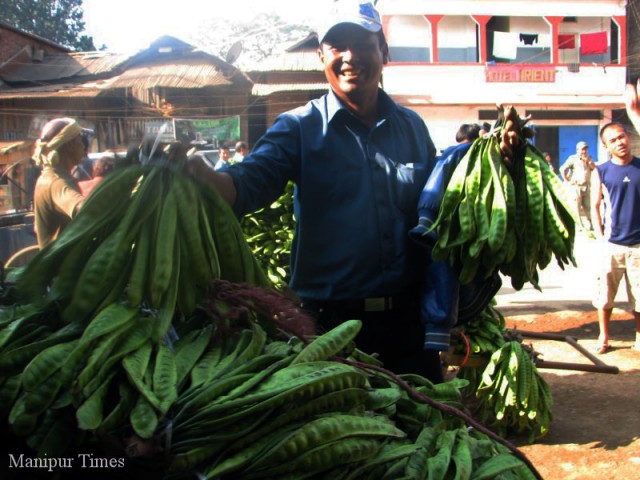 For traders in Moreh, Yongchak (Tree Bean) business – a favourite vegetable food item is earning a lot of profit.

Since many tree bean trees which grew aplenty in the valley and hill areas of Manipur have now degraded in great numbers because of factors like tree disease, rampant cutting downs, the rate of tree beanhas increased manifold.

Because of the scarcity of Tree bean products in Imphal, thousands of bunches of Yongchak mainly imported from the Myanmar has dominated the markets of Imphal.

Manipuris are fond of Yongchak in the form of Ironba curry and salad. Tree bean could be dried and seasoned for long. In fact Manipuri people living outside the State use to carry dried tree beans as food stock for indigenous flavor when they stay outside the State.

Myanmar Traders sell their goods at Nungfalong, a border market of Myanmar while the Indian traders sell goods at Moreh, a border town of India. Both the countries are doing trade through this transit markets.

Fajur Rahman, a 45 years old Yongchak trader in Moreh town expressed that favourable time for Tree Bean business is between Dec. to April as Yongchak trees bear Yonchak beans during this period of time.

The price of the Myanmar tree bean fluctuates at the time of blockade and it is sold at Rs 250 to Rs 300 a bundle. The phenomenon is just because of the simple fact that Myanmarese traders entirely depends on Indian customers.

When Indian customers do not visit Nungfalong market of Myanmar located at the Indo-Myanmar border the market appeared to be paralyzed.

With an investment capital of just Rs 50,000 one can at least earn a profit of Rs. 10,000 expressed Fajur Rahaman – a tree bean trader in an interview with Manipur Times.

Fajur Rahaman has been doing this business for the last 4years. Earlier he was occupied with other business. In view of the heavy demand of tree bean from Manipur and the possibility of huge profit, he started yongchak business leaving all his other business. Presently, he procures tree beansfrom some farmers of Myanmar and stocked them at his home in Moreh town.  He then sold out the beans to the Imphal traders at their arrival.

Because of heavy demand of yongchak from Manipur, Myanmarese traders increase the rate of yongchak by leaps and bounds” said the trader.

Historically, Myanmar (Burma) was known as “Awa” by the Manipuris. During the time when Manipur was a Princely State and not a part of India, frequent fights between the two neighboring countries i.e Manipur and Myanmar took place where both side won at instances.

Since India and Myanmar have now come to a good friendly relation, both the two countries are going on trade in this border town Moreh over 44 trade items. Now the trade items have been increased to 62 in view of the Look East Policy.

Many Car rallies have taken place recently, building up ties with neighboring countries. We are witnessing vegetable trades in our feature story today.

Local tree bean trees are under keen care and study by experts and the past abundance could be repeated in future. However Yongchak remains the favourite food for many. Jokes apart, the gastric emission after a tree bean meal is as unique as one can identify a local populace in a strange place.