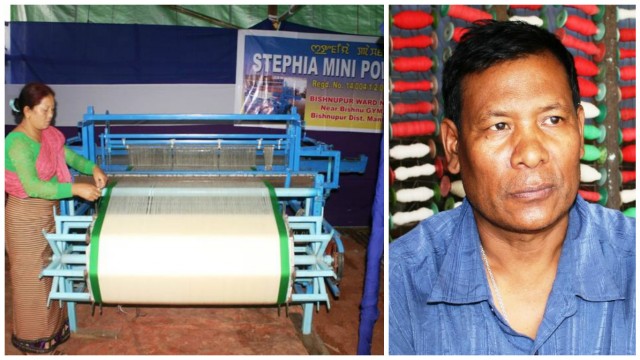 Innovation of Mini powerloom Loom by developed by a local innovator has come as a boon to the Manipuri weavers, depending on traditional looms for production. The output of the device is 25 to 50 times more than the traditional shuttle loom, and almost any other power loom. This innovative machine can weave 3 to 4 fabric per hour whereas the traditional one could hardly make 1-2 fabric in a day. Except for the change of bobbin, the machine doesn’t require any manpower. The device which consumes around 350 electric watts can work for at least 15 hours with a 24 volt battery.

The powerlom is developed by Sorokhaibam Biren (55) from Bishnupur Ward No 7 and his product has been among the best choice of the expo revelers, the handloom weavers in particular at the ongoing Manipur Industrial expo 2016. Biren developed the first prototype of Modified Power loom in 1992. He developed the electric operated power loom by modifying the manual handloom while incorporating a half HP single-phase motor to give a fresh hopes to the handloom Industry sector of the state. This new device has a provision to regulate shuttle speeds depending on the type of cloth being woven and facilitated speedy production without much taking time and manpower. Compared to other commercial power looms, his innovative device is of affordable cost and less manpower requirements as compared to the traditional loom.

Biren is now hectic on making many modified power looms at a workshed set up at his own residence located at Bishnupur Ward No 7 under the brand Stephia Mini Powerloom. He named his innovative device after his late daughter Stephia who died accidentally.

He has been able to give employment to some local people in his firm. He said that he has received several demands from the costumers. Born to Sorokhaibam Naba Singh, Biren is the eldest son among six siblings in the family. Since childhood, Biren had a passion of repairing defunct electronics items