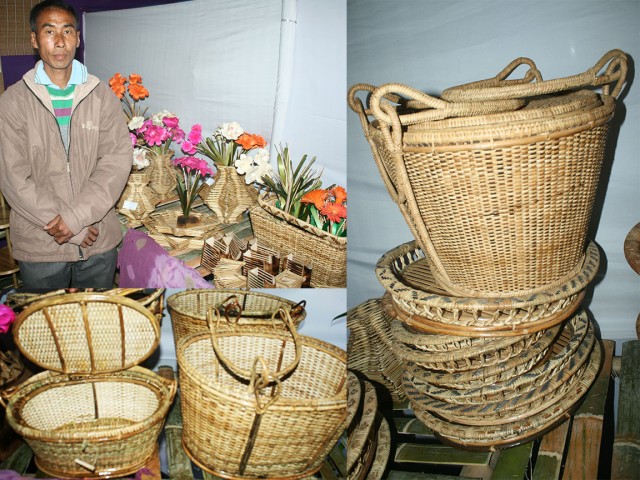 Taorem Sanahal, 45 S/o Taorem Raghu from Yurembam Makha Leikai is an Artisan who makes various craft items with cane and bamboo which are available aplenty in the state.
Various items including basket, Mora, make-up box, tray, flower pot, Lukmai etc which are purely made of cane and bamboo are being displayed at stall number 27 of Manipur Bamboo Mission opened as part of the Manipur Sangai Festival 2015.
He was greatly motivated to initiate bamboo craft successfully after he completed a one year training course in cane and bamboo organized by Patsoi Craft Society in 1996. He also inherited the skill of bamboo craft from his father Taorem Raghu, a craftsperson by profession.
Brought up in a poor family, Taorem Sanahal could not continue his studies after passing class XII from Recent Higher Secondary School prompting him to initiate bamboo craft to supplement his family income. He claims that he maintains his family and sends his children to school comfortably with the income earned from the craft which is on high demand in the market.
He said that the he procured the bamboos from Yurembam and its surrounding villages at the rate of Rs 150 to Rs 300 per piece while rolls of cane are collected from Tamenglong at the rate of Rs 50 to 100 per kg.
He is also providing employment to 4-5 men of his locality who are now able to maintain their family comfortably with the income from this job.