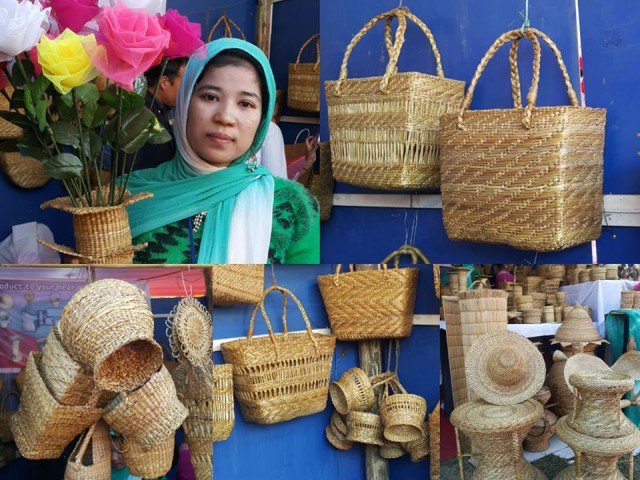 Many of us have heard about cane & bamboo or Kouna crafts but seldom witness the craft of Chumthang. Miss Nazima who is 26 years old is one such artisan who inter-wove Chumthang to support her family. She is the third daughter born to Baratun. Unfortunately her father is no more. The family has six siblings of which 5 are daughters and 1 son. Nazima belong to Bengoon Mayai Leikai of Mayang Imphal. Nazima’s Chumthang craft are displayed at Stall No. S-64 of Manipur Sangai Festival 2015.
Her birth to this area is so supportive to her talent that the raw material (Chumthang) is available in plenty of being nearby to lake and marshy area. Nazima passed X-Class in 2014 and now she is studying intermediate. Revealing about her art, she participated in a training of one month organized by Rural Development Association in her locality eight years back (in 2007). That training was so important to her random life that it could bring her to State Merit Award in 2011. A multi-bulb lamp stand was the model on which she won this award. She came across various hardships unto this position she stands today. He work for which she was recognized was her lone struggle and self-induced work. Nazima is also a State Awardee, she counts. In 2013 she received State Award for her masterpiece i.e., Yengrung-an oject wear over head to protect from Sun, rain or frost etc while working. Making that Yengrung took nearly 17 days and she did it by working 3/4 hours per day.
Now, Nazima is instructing 15 individuals under Guru Shiksha Parampara. The training will goes for three months wherein she guides the participants about the art she possesses. To expose more of her work, she took a stall in Sangai Festival 2015 where she can display and sell her Chumthang handbags and flower-pots ranging the prices at affordable rates from Rs. 250 to Rs. 450.