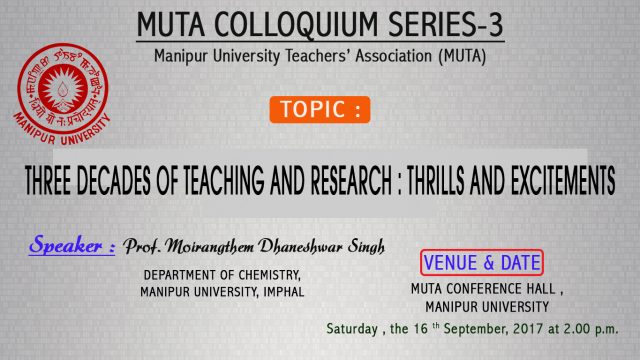 You are cordially requested to attend the third MUTA COLLOQUIUM SERIES (MCS-3), organized by Manipur
University Teachers’ Association (MUTA), which will be held on 16th September 2017 (Saturday) at MUTA Conference Hall, M.U. at 2.00 p.m.

Topic:THREE DECADES OF TEACHING AND RESEARCH: THRILLS AND EXCITEMENTS

ABSTRACT: Prof. Moirangthem Dhaneshwar Singh had served the Manipur University for more than three decades (January 1979 to August 2017).During his teaching and research career, he had the opportunity to work at the prestigious Princeton University, New Jersey, USA (March 1983 to February 1985) as a Post-Doctoral Visiting Fellow.Later on, he got the opportunity to work at the Okayama University of Science, Okayama, Japan as a Visiting Scientist (July 1993 to June 1994) and again as a Visiting Professor to the same University (September 1997 to March 1999) on a High-Tech Fellowship programme of the Government of Japan.The speaker will narrate his experiences and observations during this entire period of his teaching and research career.This will help to build a strong scientific culture on our university for future generation.