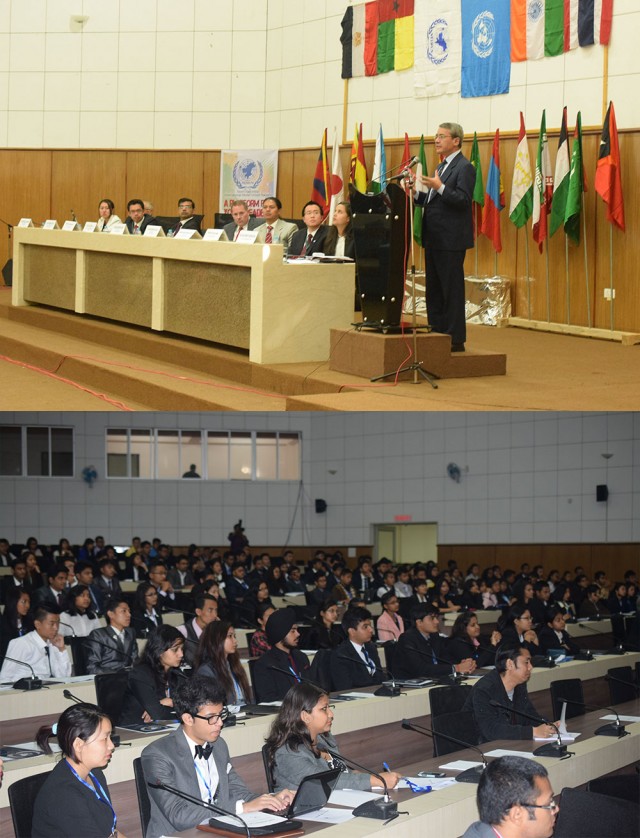 The United Nations, a body that was established to enforce peace, stability and diplomacy in the world brought nations together to draw a general consensus of ideas and perspectives. Years after its establishment, academies and organizations begun adapting the concept of the United Nations to start small-scale model versions of the UN, called MUNs. The North East of India also came up with its second instalment of an international MUN – the NEIMUN’14.

Realizing the position of influence that the youth holds and providing them a platform to voice their opinions and ideas is essential, in collaboration with the Government of Meghalaya and the UN Information Centre for India and Bhutan with sponsors from the Directorate of Sports and Youth Affairs, the Chief Minister’s Voluntary Action Fund and Domino’s Pizza partnered by the American Center for the US Consultate General in Kolkata, Best Delegate US, Eastern Chronicle and The North East today; saw the requirement to come up with an immediate solution.

The UN day was celebrated on the 24th day of October ’14; at the State Convention Centre, Shillong, Meghalaya; in a spirit of optimism during the opening of NEIMUN’14, with over 300 delegates between the ages of 15-25 from all over the nation and a dais of influential speakers. The Secretary General Jiedine Irene Alexandria Phanbuh, the Director for the NEIMUN Limabenla Jamir opened the ceremony with riveting speeches about their stories. They were also joined on the podium by prominent key note speakers namely, Chief Guest Mr. Barkos Warjri: (IAS) Chief Secretary and State Vigilance Commissioner of Meghalaya, Mr. S. Goyal (IAS): Deputy Commissioner and District Magistrate for Meghalaya, Mr. River O’Nell Wallang: Former High Commissioner to Zambia and Malawi, Mr. Damon A. Williams: Vice Consul, US Consulate General in Kolkata, Dr. Bremley W.B. Lyngdoh: the Co-Founder of Global Youth Action Network, Mr. Ryan Villanueva: Co-Founder Best Delegate and Mr. Kevin Felix Chan: Co-Founder of Best Delegate.

The speakers brought to light the current world scenario with regard to the theme, “The Past 2015 Development Agenda” and gave the gathering a detailed and factual coverage of the issues that the world is faced with and possible solutions that might improve the situation. There were music performances before the training sessions begun for the delegates to brace them for smooth flow in the conference that is about to follow for the next two days (until October 26) where intensively diplomatic debating will take places after the trainers finish with training the delegates and the 5 committees under the General Assembly of the UN proceed formally. With all the delegates drafting their own resolutions and looking to combine all of them into one, common resolution the views of each and every individual will be given proper recognition and all the delegates will be able to voice their own opinions publicly. Foreign relations will be complied with, in-country affairs will be taken into account and mutual agreement will be looked after.