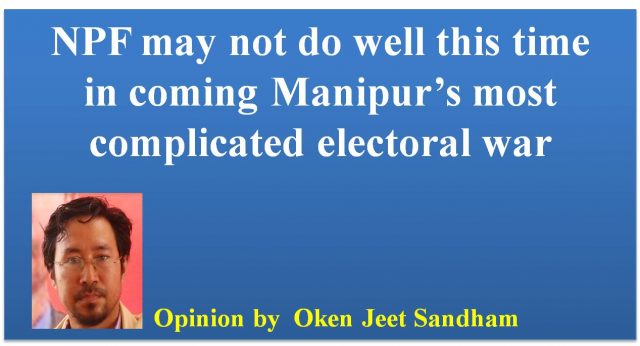 As I fairly analyze the ongoing electioneering scenario in Manipur’s most unpredictable political games, the regional Naga People’s Front (NPF) may likely to suffer this time. The complication of the NPF is their allying with the BJP, which is fighting with whatever available means to dethrone the strong Congress Government headed by O Ibobi Singh in Manipur.

One should know the political dynamics that for Narendra Modi, the ousting of O Ibobi Singh Government is more important than solving the longstanding Naga political issue. In doing this, Modi or for that matter any BJP leaders from the Center including their Union Ministers will do anything to please the Valley people.

O Ibobi Singh, who has been running Manipur for 15 years by exploiting the sentiments of the people particularly the valley people, has come to know that he can no longer play with the “Manipur territorial integrity card” to win the elections for the fourth term. He has been waiting to hit the political jackpot as and when any Central BJP leaders start opening the “sensitive Naga political issue.” But the Central BJP leaders and even Naga political leaders in Manipur and Nagaland have come to realize that by opening the sensitive Naga issue will be giving only “political oxygen” to the Manipuri strongman.

The recent acceptance of four NPF MLAs’ resignation by the Speaker of Manipur Legislative Assembly has made a great disadvantage to four of them and also their party as well. Had the Speaker accepted their resignation within a month or two, the political fortune of the four would have been different. But now, due to the fast changing political scenario in Manipur, the BJP started playing a critical role in the Hill areas holding crucial meetings.

Saying that their tendering resignation “as a supreme sacrifice for the protection of the short and long-term interests of all the tribal people including Nagas inhabiting the hill districts of Manipur,” they asserted that the resignation from the Assembly was a “serious and severe protest against the consistent, cruel, crude and unpardonable anti-tribal and anti-Naga attitude, approach and actions of the Ibobi Singh Government” as evident from its three Bills and the Resolution on the Indo-Naga Peace Accord.

Although NPF President Dr. Shurhozelie, while talking to press in May this year at Kohima, said his NPF Party would win around 14 seats in the Hills of Manipur and the BJP would also win a sizeable number of seats from the Valley areas in the coming Manipur General elections due early next year, there appears to be a tacit political understanding between the BJP at the Center and the NPF not to open up the sensitive “Naga political issue” in the run-up of the Manipur Assembly elections this time.

As seen from the strange political development that has been going on for quite some time in Manipur, it appears that the priority of the Central BJP and the NPF is to defeat O Ibobi Singh’s 15-year Congress regime in Manipur, and not talking about the solution to the “longstanding Naga political issue” at least this time.

Yet, O Ibobi Singh, the Chief Minister of Manipur, cannot be written off as of now. There is still six months to go to the Manipur Assembly elections.

Let us watch the greatest political drama and games of the 21st Century.