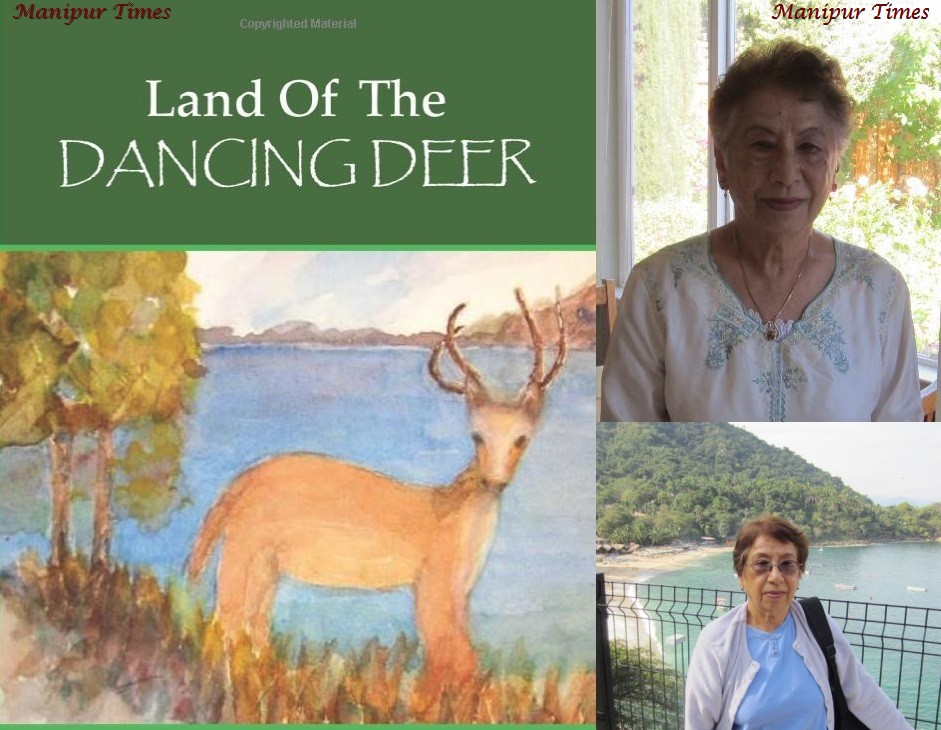 “Love is one thing which has no boundary, no demarcation, no caste, and no religion but is the feeling from heart. What is trying is the making of comfortable life.”  (Author unknown)

She portrays her family history in poetry and her book reflects her beautiful memories, beliefs and stories of her life’s journey particularly in Manipur. Jamuna Devi Advani, originally from Manipur and currently resident of California, USA is the author of the book, Land of the Dancing Deer.

Jamuna was born at Keishampat in Imphal West and grew up at Jiribam as she was taken there when she was just few months old. She grew up there till she was in VI standard. The family returned to Imphal when her father was transferred after many years, and she was admitted in Class VII at Tamphasana High School.

In the year 1952, she passed Matriculation under Gauhati University. She completed her intermediate schooling from DM College in 1954. At that time, there was an offer for scholarship from government of Manipur for the course in BSc(Hons) Nursing  under Delhi University.

Even though she didn’t have much interest in nursing her desire to see the outside world made her decision to take the scholarship  and study BSc nursing.  Ultimately when she joined the College of Nursing she enjoyed the company of other students from all over India as the scheme was meant for the students from  almost all the Indian states.

After her graduation from the College of Nursing., (later named as Rajkumari Amrit Kaur College of Nursing), she came back home and worked as sister-in-charge of surgical ward at Civil Hospital in Imphal. She worked there for about five years and then got married to Mr Rup Advani, a non-local. She stayed with her husband in Imphal for some time.

Marrying a non-local was a big challenge then. She had to face endless social stigmas. Such circumstance partly compelled her family to leave Imphal. She resigned from her work and moved to Shillong and settled there. She began to involve in volunteer works in social welfare for the local communities. She also devoted her time in arts and crafts like making decorative candles, artificial flowers, sand crafts and wall hangings.

She loved reading books since she was in the seventh standard. She read fiction or non-fiction, and was very much interested reading poems specially by William Wordsworth.  But she never dreamt of becoming a writer herself one day.

She likes Manipur especially the womenfolk who are always actively involved in contributing economically to the Manipuri society, also the culture and traditions.

She keeps Manipur close to her heart always. Her book, Land of the Dancing Deer, is about Manipur, and the deer she has mentioned here is Sangai. The book reflects the past of her life experiences and especially about her grandmother. The pictures in the book are the images of her paintings and photographs that explain the untold stories of those days in Manipur. Her book is available in Amazon.com, Lulu.com  and also as E-book.

Jamuna joined a workshop organized by an author Linda Joy Myer in the year 2007 . Since then  her interest in writing aroused and there had been contributions as poems, short memoirs in journals of Story Circle Network and anthologies of Trivalley Writers’ Club and also in California Writers Club’s journals.

Jamuna’s hobby  includes water color and Chinese brush painting..She is indulged in vegetable  and fruit carving  occasionally for friends and family’s parties and entertainment.. Even though she never took classes on these things she learnt from observation and practice.

The best memory she still treasures is about her grandmother who became a widow when she was just 21 and left alone with three little girls. Jamuna also said that her mother was only 16 when she was born. She felt very sorry that she didn’t collect all the details about the lives of her mother’s side of relatives. She wished she started her writing career from an earlier age and thus could connect the links with those individuals about whom she longed to learn more.

Jamuna remembers how she was taught by her grandmother and mother many worthy things when she was  growing up so that she would become a perfect woman.. Her grandmother advised her that a girl should always walk softly so that foot steps should not attract attention of others. She was also instructed never to look straight to the eyes of elders.  At the same time her grandmother and her parents were very serious about education. Even though her father was interested in her education, it was her grandmother to whom she would give credits for everything in her life.

Jamuna’s worries were when her small kid brothers were still young and needed financial plan for their future was not forthcoming from her father. But she never blamed her father of being a victim of extra-marital affairs but for irresponsibility of his little sons of their future. These notions of polygamy, a predictable reason of unbalanced gender ratio, are clearly predicted in her book.

Marrying an outsider was the biggest challenge she faced. Even when her family accepted their marriage, the society in which she grew up did not accept them. But today in every locality Manipuri girls marry outsiders, she added.

Another challenge of her life was her family’s migration to Canada in 1994. It took some time for her to adjust to the Canadian lifestyles.

In 1996 she had to move to US to help her second daughter Shobha who needed her help in looking after her three little sons while she had to complete her Master’s degree and teaching credential. At the same time Jamuna’s husband flew to India for his business.  She was waiting for his return for the last one year when he passed away with a fatal stroke just two months before his scheduled arrival at US.

Even though they built a house of their own in Imphal they had moved to Shillong and settled there for about 8 years and then they moved to Kalkota where they lived for another 7 years. Those were the days of fond memories they had shared together while their four kids were growing up.

Now, writing has become a part of healing process for Jamuna. One thing she regrets most is about her kids. She did not spend much time with her kids instead they were sent to boarding schools at their tender age. She wishes if those times could be rewound again so that she can share every moment of their beautiful life together and holding them in her warm chest. She still bears the pain of an incomplete life.

Her funniest incident was always at the golf course. When anybody asked about her nationality, in response she would bet a cup of coffee if they could tell where was she from. At the end she always won the coffee. No one ever could guess that she was from India.

A Note:  By the time this story comes out in Manipur Times Jamuna Devi Advani has published her second book “Symphony of Heart Songs” in 2013 and available in blurb.com. Her third book, a memoir “The Letter” is coming out soon.