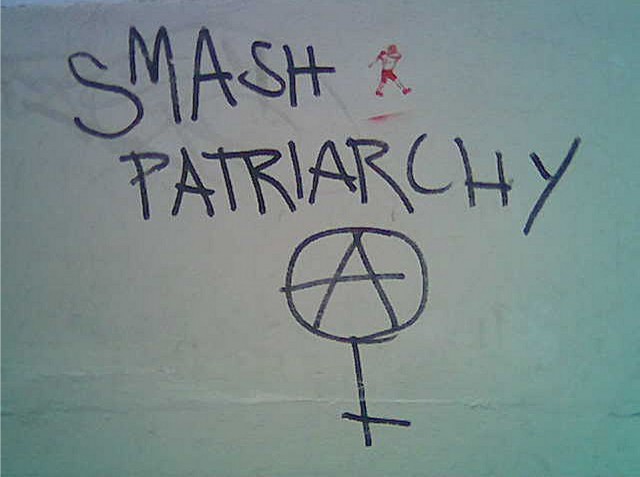 To all the misogynist patriarchs and their subjugated supporters, this article is to deflate your over fed male chauvinist ego and the rape culture that it promotes. So, read it carefully and please do the world a favor; by killing yourselves if you have any justification for promoting ape culture! Of all the scum that walk the earth, Manipur does not lack of it and more so the “meiteis/meeteis” whatever you may call these sections of the population who pride themselves for having been royal slaves or royal ass wipes. Royalties prided themselves of being patriarchs now the tradition continues. Indeed the old king is dead!

Let me talk about a little ritual in Manipur called “Nupi Chenba”, especially popular among the “meiteis/meeteis”, let’s not call it “eloping” because the word connotes a certain degree of secrecy and gender neutrality. While on the other hand “Nupi Chenba” is a highly sexist and an institutionalized form of sexual violence against women and it is not much about secrecy but rather exposing the secrecy of sexual relationship. I say ritual because this practice is associated with traditions prescribed by the community and to certain degrees with religion. Because it is the symbolic start of entering marriage life and marriage is legitimized and instituted by tradition and religion. This little shitty practice called “Nupi Chenba” legitimizes numerous rapes. And the people who pride themselves of this practice as liberating and romantic are the ones sustaining rape culture. So, be careful of your opinion please!

It is always “Nupi Chenba” not “Nupa Chenba”. We can actually see the apparent inactive role given to women in this practice. We see women as a consent giver and men as the active agency that set things rolling.

Even in numerous cases where women initiate the practice it is still “Nupi Chenba” and not “Nupa Chenba”. But presupposition of nactiveness of women as an agency is a patriarchal and sexist ideology that runs on the assumptions of inabilities of women.Tradition and culture demand that men have to find ways to carry woman out of their home and announce that they have put a mark on the woman. I say mark because this practice entails a symbolic marking of ownership on the female body; that she has entered the realm of sexual relationship with the man. Therefore, what stands out now is the legitimization of ownership of her sexuality by the man who carried her out of her home.

While the idea of marking the male sexuality is hardly true! With men never do we hear the words “madi chellurae” (translated roughly as “that person had ran off”). But we do hear that a lot about women. It becomes a marker that the woman has had sexual relationship. It also creates a boundary of purity where women who are marked are no longer “pure”. It shows a preference of virginity and slut shaming of women who are marked but not married. And I say to this, that virgin praising is rape culture, slut shaming is rape culture! It is through the justification of purity and virginity that ownership of the women’s body come. This culture idealizes man to own the “pure” body of women while slut shaming the “impure”. So, marked women are deemed to marry the men that marked them to maintain the realm of purity.

Rape is in its essence about owning the sexual body and making it the site of violence. And categorization of the “pure” and “impure” is structurally instituted violence on the women’s body on one hand and promoting ownership on the other by idealization of the pure body; creating a demand for the pure body of women where males compete to own the purest body of the women. AHH!! THIS IS RAPE CULTURE!

And hats off to men who don’t believe in such competition! But what have you done about it? If you are not doing anything about it, you are part of the competition because your indifference sustains it.

Next off we must talk about “Keinya Katpa”, the bigoted practice of forced marriage. For people who believes in sexual relationships without the practice of marking off the women’s body, you will be dealt with by the moral police officers of the “Meira Paibi Deparment” who will forcefully legitimize sexual relations by hanging garlands made of slippers and tin cans on their neck. So, this is by far the cheapest means to get married. No pundits, no priest, no band music, just raw marriage!

If this is not sexual violence and forced ownership of the sexual body of women, I don’t know what is! I am all grateful for political activeness of the “Meira Paibis” on many other arena but on this particular note, this is just RAPE CULTURE!

For men and women who actually believe in “Nupi Chenba”, even if you are both in agreement, you are actually sustaining the institutional violence on women. You are giving recognition to the authority that legitimizes and delegitimizes sexual relationship. Why does consensual sex need to be legitimized by society? May be the fear of the moral police I reckon! Even if we go by the legitimacy from the law too, consensual sex between two adults is not a crime. While on the other hand “Nupi Chenba” promotes under age lovers to get married, this is completely paradoxical to legality. And even for women who consent or even initiates, they are still instituting symbolic violence as they are reproducing the patriarchal system that marks off the women’s body as being owned and impure.

As for numerous women who have been forced to marry their rapists, “Nupi Chenba” is legitimization of rape. And THIS IS RAPE CULTURE!

When men actually carry off women without their consent, it almost all the time culminates into a “Nupi Chenba”. While few women fight back by rejecting it to be categorized under “Nupi Chenba”, there are those numerous women who are cooking food and washing clothes for their rapists. Forced “Nupi Chenba” turns out into consent by women most of the times because of the mark that has been imprinted on the sexual body of women, the tag of “impurity” that carries she carries on her body. “Nupi Chenba” legitimizes ownership of the women’s body. THIS

As for “Ejaat Dhaabi” (roughly translated as raising an economic demand for the lost of sexual purity), it is the commoditization of women’s body. By compensating rape victimization in monetary terms it is limiting the spectrum through which she can fight back. It is limiting the ability of women to define rape. Even when in rare cases when “Ejaat Dhaabi” is done by men it is still sexual violence of women and commoditization of her body because then men expect monetary demands for the failure to mark the women’s body as impure, but purity of men is never at question.

Let us not go into the legal definition of rape, but let me just state that by rape I mean the boundaries by which women can fit in and define different forms of sexual violence. So, all that falls into that boundary is rape. Defining rape becomes a tool of liberation for women since rape is a heinous act of sexual violence and people categorized as rapists are entailed with certain form of punishment and stigmatization. But the boundaries cannot be fixed by men. “Nupi Chenba” is just that. Defining rape is also about defining the preconditions that enable rape. And patriarchy is the foundation on which rape culture is built; it is the sexual domination, violence and subjugation of women and other genders by men.

The horrid world that we live in must be the cause to fight for any real revolution. To fight the horrid world and imagine a liberated society free from coercion and violence, one gender is not enough. Liberation of women and other genders go hand in hand with the struggle for a liberated egalitarian society. Denouncement of “Nupi Chenba” and this RAPE CULTURE is a start.

(The writer is a nobody; just a believer in smashing patriarchy, unlearning sexism and ending rape culture)

Some Moments with Singer Bobin