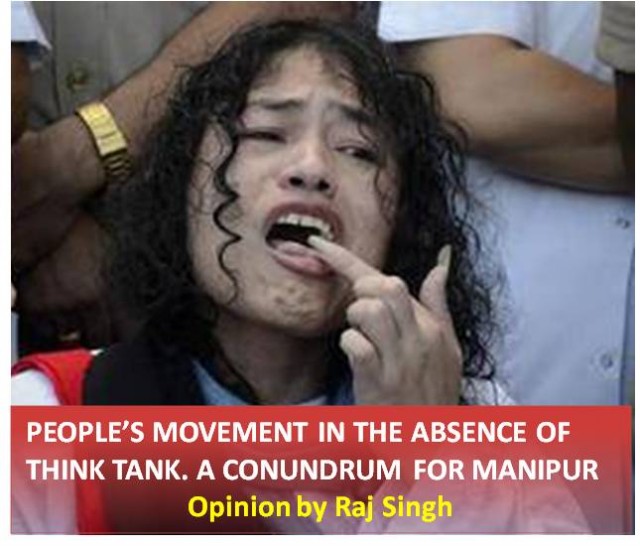 Irom Sharmila has broken her marathon fast leaving the entire population with mountains of conjectured opinions and speculations about the past, present and future of the AFSPA movement involving her. But life still goes on because that’s the way it is!

Ending of Sharmila’s 16 year fast unrewarded is an epitome of facing pitfalls of public movements in the absence of think tank. This statement goes in full acknowledgement of whatever level of success her iconic feat achieved in exposing India’s draconian law AFSPA to the world. But, the fact is – the unjust law still persists.

Sharmila was a non-entity when she took up her fast-unto-death against AFSPA in the midst of public protest of Malom massacre in 2000. This very fact took her a longer spell of her fast to start commanding public support as compared to other hunger strikers like Anna Hazare, Bapu Surat Singh Khalsa of present times and Mohandas Gandhi whose precursor active political activities made their fast effective. The bottom line is – a single feat of endurance of an individual is not enough; a thinking population must be behind a movement.

When Sharmila’s unparalleled will and sacrifice of fasting for years won recognition and honours from a number of organizations international (Gwangju Award, Korea; Asian Human Rights Commission Lifetime Achievement Award, Amnesty International) and other Indian states (Mayilamma Award, Kerala; Rabindranath Tagore Prize of IIM, Sarva Gunnah Sampannah, Assam) there was no organization in Manipur to give her a similar recognition. When researchers and writers from other parts of India wrote books on Sharmila and her mission (Kishwar Desai (My Hero), Deepti Mehrotra (Burning Bright), Minnie Vaid (Iron Irom), there was none from Manipur. The intellectuals in Manipur remained quite detached from the movement while Sharmila remained in the care of a Meira Paibi organization called Sharmila Kanba Lup (SAKAL).

Now Sharmila is ending her most feared fast unceremoniously and in a controversial personal move allegedly disapproved by her family and the coterie of supporters in Manipur. As it appears, her venture started on her own and ended on her own. The support of her new decision of quitting fast, join politics and settle married from a large pool of supporters is mainly out of empathy for her and in disgust of lack of public support during her fast. The strategy for movement against AFSPA for now is in suspense. Obviously not many people buy the idea that Sharmila will be more successful in her mission after joining state politics; more so when she vengefully (not objectively) aims at the constituency of the sitting Chief Minister. It is simply incredulous.

The modern non-violent protests or movements no longer rely on moral pacifism alone but on a sophisticated designer approach to effectively counter all overt and covert actions of the powerholder to dissipate the movement. It is naïve to believe that the extraordinary sacrifice of Sharmila would have touched the heart of Indian government to concede her demands. In addition to the two basic ingredient forces of non-violent protests required for success, viz. sacrifice and disruption, we needed a third force to synergize the alchemy – the intellectual force. AFSPA movement lacked the third force as the Manipuri society today has no think tank to guide the society.

The Manipuris loved and admired Sharmila. But their empathy and acquiescence were not enough to sustain the movement before Sharmila got burnt out. A think tank backed movement could have strategically prolonged or ended Sharmila’s fast without giving a jolt to the momentum. Who knows, time was already ripe for playing the endgame to win! Did we simply waste the opportunity by failing to recognize it?

A think tank is different from the coteries of the many Civil Society Organizations a.k.a. CSOs in Manipur who own one or two movements each of their own which are often partisan or parochial. It does not represent the crowd of vigilante groups or Joint Action Committees a.k.a. JACs that often take law in their hands in protecting social values and social justice.  It is not even an elitist group to lead the mass through its influence. A think tank is an organization for research and advocacy on various social issues well respected by both the public and the government for its resourcefulness and unbiased disposition. Such an organization is conspicuously absent from Manipuri society today making it a rudderless vessel in a sea of turmoil.

We have academics, professionals, journalists, lawyers, social engineers and politicians many of whom remain mavericks in the absence of a think tank. Their knowledge is not pooled nor organized. Sometimes, their ideas are simply rejected by activists on the ground for the reason that they do not join the street protests and therefore, they do not know where the shoe pinches. These maverick scholars seldom professionally react to the writings of another scholar. Thousands of editorials in local dailies go without intelligible comments from learned readers. Seminars and symposia go without publishing the papers presented and the ideas generated in discussions. The government do not expect much from the universities in planning projects and programs. The entire society thus lives in conjecture and confusion.

Manipuris have a plethora of hotly contested issues no less important and urgent than AFSPA. Each issue drives the people to the street for protests causing disruptions of public life, probably the only method they know about drawing attention of the government. The pile of genuine issues, ill-defined issues and non-issues and their concomitant disruptive movements causes an insidious process of building cynicism and hopelessness in the society. A think tank institution can be a natural arbiter of debatable issues and it can reduce the societal tensions for posterity.

Will Sharmila’s ending of fast kill the cause of AFSPA? Not necessarily! Manipuris can turn this into a winning episode by celebrating the day as “Winner’s Day!” – the day Sharmila shamed India for its hypocrisy about Satyagraha, the ascetic renunciation invoked by peaceful demonstrators for just causes on its soil.