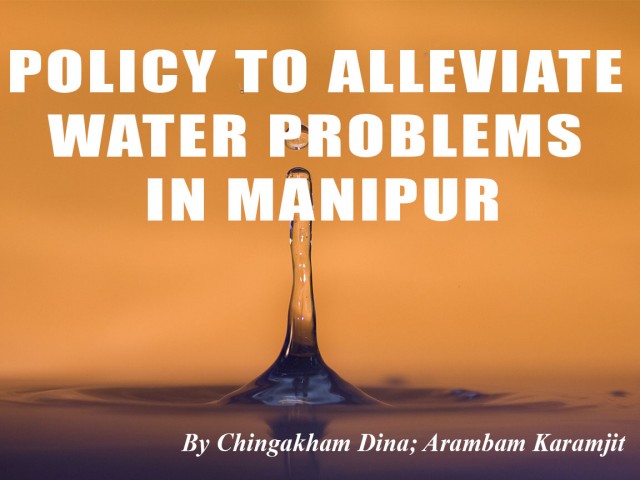 We look into water resource and compare their management between Manipur and other countries. It is imminent that water problem strikes almost every year- flood or drought. It is recurring year by year. But nobody cares much about this very important unavoidable resource. We need it every single day for whole life for everyone. We raise the voice only when the time comes and strikes hard, otherwise we do not learn anything from the past. We have water shortage or flood problem because we don’t have proper water management.

Water management in different countries. Water scarcity is happening in many countries without proper water management. In Thailand, the government builds dams to manage water. Sometimes, they use artificial rainfall when there is insufficient natural rainfall for agricultural usage. Singapore  is located at equatorial region receiving annual heavy rainfall. It has potential water scarcity problems due to little rain catchment area because of extensive city construction, but Singapore solves the issue by importing water from Malaysia and it implements very high quality water recycle that includes sewage water.

About 30% of water in Singapore comes from recycle plants. Water in Singapore’s public toilet is high quality and, even better than the quality of water used by the elite class people of Manipur. UAE solves the water problem by getting about 72% required water from underground. USA has annual average rainfall of 715 mm which is about half the rainfall of Manipur. But their prosperity and high technology and investment make them one of the richest water resource available for usage in the world.

Manipur’s rainfall is higher than that of India’s average rainfall. Even though we have higher rainfall in Manipur we still suffer water scarcity due to improper water management. Water is drained and disappeared just after rainfall as there is no rain water harvesting facilities. As the rain catchment areas are destroyed, water is drained quickly after rainfall. This year, we are suffering from flood again.

Daily water consumption per head. On planning paper, India expects everyone could get minimum water at 135 litres per person per day (source: The Hindu, February 15, 2013), but it cannot achieve its goal. Thailand’s water usage is 219.5 litres per person per day at present decreasing from 223.5 litres. Sometimes there is water scarcity for rice field in Thailand but there is no question of shortage of running water for home usage. It is the government’s responsibility to supply enough water for everyone and everywhere in Thailand. Their government is doing their job and they really mean what they are supposed to do.

United Arab Emirates is one of the least annual rainfall. This is near desert like country. But UAE is one of the highest average water consumption of 500 litres per head per day. It is possible because of proper water management. Annual average rainfall in the USA is 715 mm and it’s consumption is 1514 litres per person per day. This huge water usage per head is possible because of her strong and effective policy and management. Rain harvest is commonly done everywhere to manage proper water supply. This is the area we are lacking and our government should use money in projects for such unavoidable necessary resource.

Human as causes of water scarcity in Manipur. There are many rivers, wetland, lowland and suitable places for construction of dams and reservoirs in Manipur. People of Manipur have very low civics sense compared with other nationalities. We have bad culture of water usage. We take a bath in the pond, and the same water is used for drinking and kitchen purposes. Our already insufficient resource is spoiled by dumping garbage in the river. Nambul river and Imphal river are examples of too much pollution with garbage. Planners and authorities are not taking up any stringent action to clean up these rivers. You will never see any dirty and garbage in Chao Phra Ya river which is running right in the middle of 15 million (day time population; actual dwellers is about 8.28 million) population city of Bangkok. You are not allowed to dump dirty things and garbage. But in Manipur, there is no proper rules and guideline to stop pollution in rivers. An “Exclusive Video – Loktak: A Fresh Water Lake or a Dump?” by Kanglaonline published on 13th March 2016, shows the real picture of people’s culture destroying the ecosystem of Loktak lake by dumping garbage, plastic bags, plastic bottles upstream and destroys the nature of downstream and habitats.

The main problems of water shortage are directly or indirectly related to:

There are some water supply plants such as at Koirengkei, Porompat, Eroisemba, Canchipur, Singda dam etc. These cover only some small areas of Manipur and most of the villages of Manipur don’t access to running-pipe water. Water is so much important than some other resources and one cannot live without water and this basic need is important for everyone till the end of our lives. However, this resource is being neglected by everyone from government authorities to common people.

The quality of water supplied in pipe could not be high enough to drink in Manipur comparing with other countries. In Singapore, their government uses high technology water treatment plant. The quality of water is amazingly high but her citizens do not drink it directly from pipe water as people are very aware of health. In the same way, in Thailand people don’t use running pipe water for drinking even though the water is very high quality. People drink bottled water. We don’t have modern water treatment plants in Manipur. The quality of pipe used is not as high standard as of Thailand or Singapore. Rusting in pipe, leakage on supplying pipeline and contamination with disease causing germs and bacteria, poor quality of water treatment are fearsome to consume but this is what people drink and consume directly.

Health, hygiene and people’s appearance are very much directly related to water quality. The smoothness of our skin, the quality of our hair is very much understandable by using strong saline water, high iron content water, and muddy water without any further investigation.

To solve the issue of water scarcity, we need water revolution involving local people and government together. People don’t mind drinking water from canal and muddy water from roadside ponds.  Affordable people are proud of parking private water-tank vehicle in front of neighbours to show that they can buy supplied water. This is kind of symbol of social status and sign of richness in Manipur. But this is not long lasting solution. We need good plan for water management to have this basic need, accessible to every citizen-rich or poor.

There should not be water scarcity in a place like Manipur with proper annual rainfall if we take up proper plans. Only the possible reason is lack of management and mismanagement. The following points will solve the problems of water shortage in Manipur.