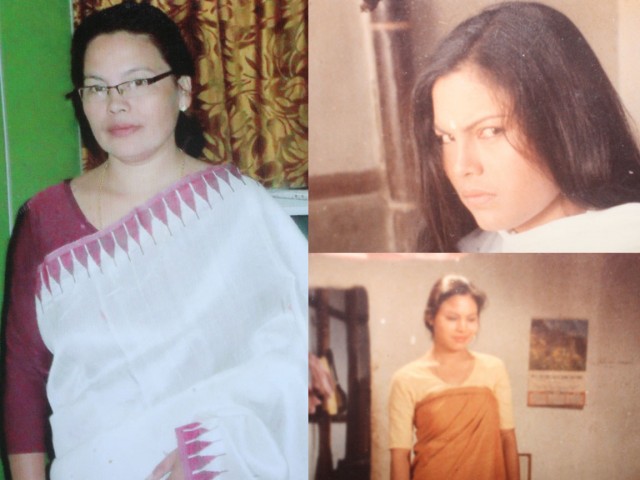 Artistes should be serious in their work and learn the art under proper guidance of a well expert teacher. Although Manipur has been able to register its name among the states producing good numbers of films, the increase in film production seems to be in terms of quantity. Quality films are less in numbers in the state. For winning award, films of good quality are necessary. Most of the contemporary films seem to carry the same storyline, same taste apart from sidelining the value our tradition, culture and costumes. We need quality films to popularize the state, said Anoubam Kiranmala, veteran Manipuri film actress.

Beginning of her journey in Art

Kiranmala is a popular film actress who took the lead role in Manipuri celluloid film Ishanou directed by Aribam Shyam Sharma released in 1990. She gave a powerful performance in the film and went straight to win the Special Mention Award in the category of Uncertain Regard of Cannes International Film Festival, France and many other awards.

Born in 1970 March, Kiranmala is the youngest daughter among five siblings (all daughters) of late Anoubam Kanhai and Anoubam Ongbi Dashumati Devi of Thangmeiband Yumnam Leikai.

She had a great passion for singing and music since her six years of age she was highly influenced by her father, a Nata Sankritana Artiste who supported his daughter in the art. She went to Government Music College to learn music, but later on, she had to stop attending the college due to her inconveniences in transportation.

At her class IX standard, she began learning dance at Government Dance College. She had to leave the art too after learning for three years as learning dance along with her studies became an uphill task for her by that time. Leaving dance, she focused more on her studies. By doing so, she could pass her matriculation from Thangmeiband Lilasingh Khongnangkhong High school in 1984-85.

One of her tragedies in life is that she could not appear her PUC second year exam at G. P. Woman College due to sudden demise of her father. However, the determined lady again got re-admitted at Ng. Mani College from where she could clear her graduation degree.

Kiranmala was introduced to the proscenium theatre for the first time when she met one theatre activist Oja Birhari of Takhel. While she was in the seventh standards, once she visited her relative’s house at Takhel. There Kiranmala met Oja Birhari by chance who suggested her to join in a new drama production. Since then, she began her acting journey.

Along with her studies, she acted in many plays of Theatre Mirror of Naba Wareppa. She had acted over 200 dramas including Purembagi Aroiba Yahip of Apunba Shaktam Artiste Association, Thangmeiband wherein she acted the role of Ngangkhaleima. Besides, she had acted in the play Chithi Puba Uchek of Oja Khundrakpam Brajachand, Kanana Haijillibano (100 episodes), Charamnaraba Thoudunung, a play dramatized from the famous ‘the hungry stone’ of Rabindranath Tagore.

“The colleague artistes at Theatre Mirror with whom I worked were all talented. Artistes of other rival theatre groups were afraid of competing with the artistes of theatre mirror. Products of Theatre Mirror namely Joy, Bidya, Yambung Bupendra, Ningthoucha Lancha have now been able to occupy a respectable position in the field of art”, she said.

Kiranmala is well equipped in the art as she was trained under various theatre Gurus. She had undergone one month long theatre training course under Giris Carnard part from training under Oja Ibotombi. She also joined in the workshop of Khongjom Parva, the famous lyrical ballad of Manipur depicting heroic sacrifice in the Khongjom war 1891. Besides, during local Lai Haraoba celebration, she acted in many dance dramas like Kege Lamja, Pidonnu under the guidance of Oja Goshe and Hemanta.

Kiranmala who ended her acting journey in theatre in 1993, began acting in films since 1988-89. She acted supporting role in the Manipuri film Thengmalabara Thajamanbi written by MK Binodini, directed by Ningthouja Lancha, Kwa Matap and Mou Ahum. Shooting of the film Mou Ahum was not completed.

In Video films, she bagged best supporting actress award in the film Kwa Matap Ama during the 1st All Manipur Video film festival organized by AMVIMPA.

Having retired from her acting journey in drama and films, she married to Ngangbam Bonobir of Uripok Bachaspati Leikai in 1993 July. Her husband is under secretary of COHSEM. She is now a mother of two daughters and a son. Interestingly, the family, now living at Langol Housing complex, has been able to produce a topper daughter in the matric exam conducted by Manipur board recently.

Kiranmala who joined government service as a teacher under Education (S) zone-I in 1992 is presently working as Headmistress in charge of Thangmeiband Khomdram Selungba Upper Primaty School. Prior to joining education department, she worked as casual employee at RIMS for two years, at state Archives and secretariat office on contract basis for one and half years.

It was then she was told to act the character of a casual lady employee in the film Thengmallabara Radhamanbi while she was working as casual employee of Manipur secretariat. She readily agreed to act the role as the character in the film was a reality to her life. Compelled by hectic official duty and family maintenance, Kiranmala has left acting career. However, she tries to support the art morally.