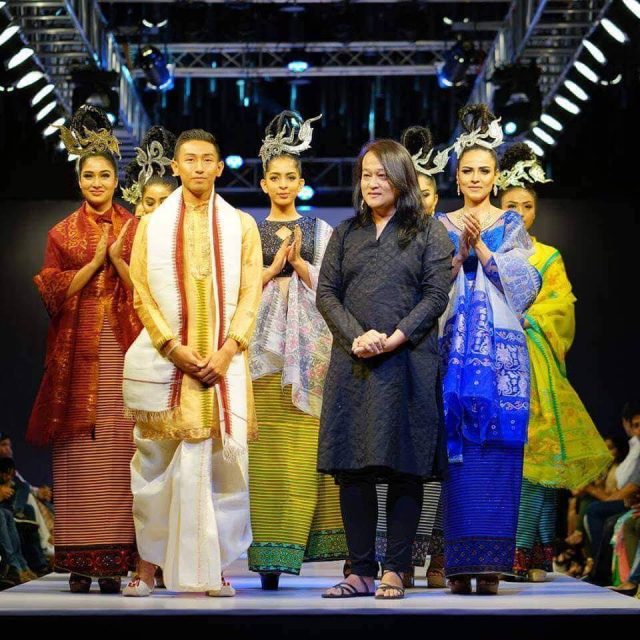 Celebrity stylist and designer Robert Naorem showcased an ethnic blend of styles from different communities of Manipur in Bangalore Fashion Week ,10th Bridal Festive held at The Oterra Hotel, Electronic City, Bengaluru, Karnataka on 5th August (sunday) ,2018 .The event also sent a message to emphasised on eco-friendly fabrics and promote the traditional way of weaving and inspire the youth to give importance to traditional textile. This also serves as a contribution towards the protection of our environment. The showstopper of the fashion event was Indian U17 star Dheeraj Singh Moirangthem

The 19th edition of Bangalore Fashion Week came to a close on Sunday, showcasing wildly eclectic tastes of some of the leading as well as budding designers of the country .The 3-day fashion event was an amalgamation of diversity, creativity and vigour , and a platform to showcase the finest winter festive collection. The event, powered by online style destination Wear.Style, featured 26 runway shows and 25 designers’ creations, read a statement.

Robert Naorem’s collections were inspired by the cultural diversity of Manipur. The outfits included those of Kuki, Naga, Tangkhul, Kabui and Meitei communities .He have used the different communities’ fabrics and made a fusion by mixing Meitei and tribal fabrics as a symbol of love and exchange of ethnic style of fashion bringing a unity of our communities in Manipur.

The handloom and textiles of the region are rich, but in today’s world, due to the influence of the fashion industry, the industry is losing its sheen. With the influx of western and outside fabrics in Manipur, the status of handloom &textiles of the state has been going down and is losing its market value. Youth plays a very important role in our society with regards to the clothing market. Making a handloom textiles of the state and show casing it into the fashion runway takes the attention of youth diverting their mind and making it as a fashion trends

Over the years, the weavers in Northeast India have played a crucial role in upgrading the socio economic status of the region with their contribution in the field of arts and crafts being immense. The handloom and textiles of the region are rich, but in today’s world, due to the influence of the fashion industry, the industry is losing its sheen. However, in an endeavour to revive the indigenous handloom culture of the state and to promote trendy traditional outfits and promoting the weavers of the State. This would give an opportunity to the weavers of Manipur to raise their products to a higher standard.

Robert was the only designer from NE participating at BFW. Models from Mizoram & Manipur including a model from Ukhrul walk down the ramp. The Show was witnessed by all well known businessmen, designers & models from India & abroad. The designs and textiles showcased at the BFW was new to the audience and it was a delightful vision to the city. The BFW also had exhibitions which have the designers a platform to exhibit their collections. The audience were mesmerized and were completely taken by the experience when the models with vibrant and unique styles walked the ramp. The event received thunderous applause and appreciation with a standing ovation. Robert Naorem’s used the track music of pena, langdeng and sembung (traditional Meitei instruments), evoking appreciation from the audience.