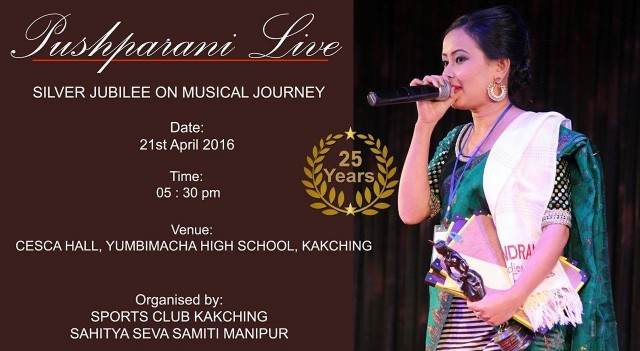 Pushparani Live – Silver Jubilee on Musical Journey, to be organised by Sports Club, Kakching and Sahitya Seva Samiti, Manipur will be conducted at CESCA Hall, Kakching at 5:30 pm of April 21, 2016.

Her academic qualification is graduate and Sangeet Nipun in Hindusthani Sangeet.

Born in 1987 at Wabagai Terapishak, P.O & P.S. Kakching, Thoubal District, Manipur, daughter of Huidrom Gogol Singh and Bishobhanu, Pushparani started her career in singing from 1991, at a very tender age of 2(two) years only and participated in a number of song competitions and won many positions & prizes. On February 1, 1991 she participated in the song competition jointly organized by NEZCE Dimapur, EZCC Calcutta and Department of Arts & Culture, Manipur in the name of Pandit Jawaharlal Nehnu and stood 1st position.

On 10th May, 1995 Manipur University honoured her with ‘ECHO AWARD’ for her activities in the field of singing at her tender age. She further achieved first position in the second State Level Junior Literary Meet on 19th August 1995 sponsored by Director of Education, Manipur, and Best Artiste in the Aheibam Shyam Nite organized by Naharol Thoudang Club, Borbil Cachar on16th February 1996.

One of the most remarkable achievements of Pushparani is that she achieved second position (first runners up) in the prestigious All India Mega Final of TVS Sa-Re-Ga-Ma organized by ZEE TV on 2nd May 1998.

Among her other achievements, the following may be worth mentioning: